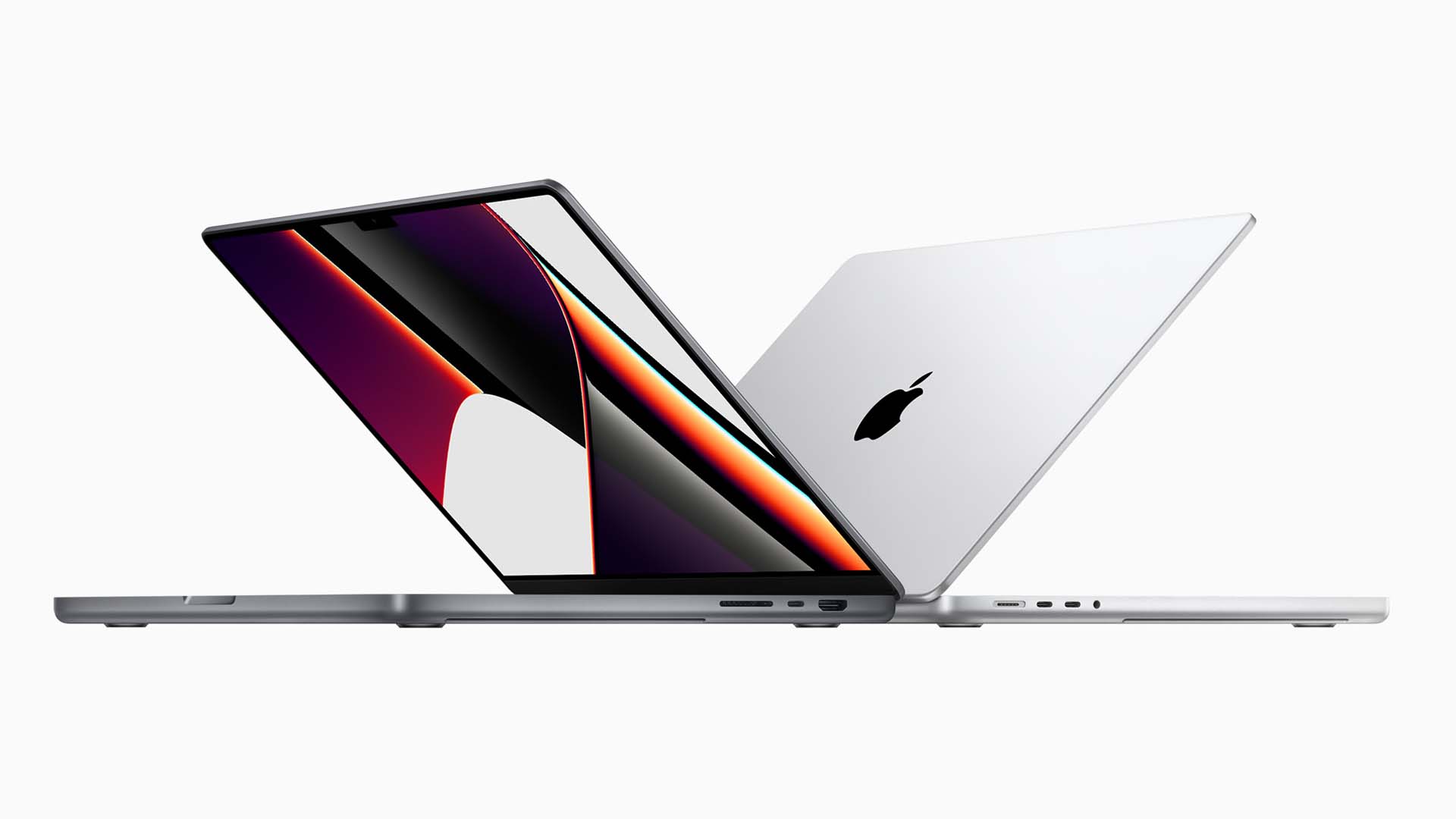 Thirty years ago, Apple redefined and turbocharged the nascent laptop market with its innovative PowerBook range. In 2008, Jobs and Ive developed the iconic but initially underpowered MacBook Air, followed in 2012 with advanced MacBook Pro Retina.

It could be argued Apple didn’t offer anything nearly so bold or innovative on Monday. Following rather than leading customer’s wish lists, but that approach in combination with Apple Silicon promise a seismic impact on the pro market. The familiar Apple compromises of refinement with price/performance drawbacks and dongle-hell is gone.

The arc of the products’ reveal started with the state-of-the-art processors and then slowly made its way outward to close with a chassis which owed as much to 2016-era designs as 2021’s XDR display innovations. 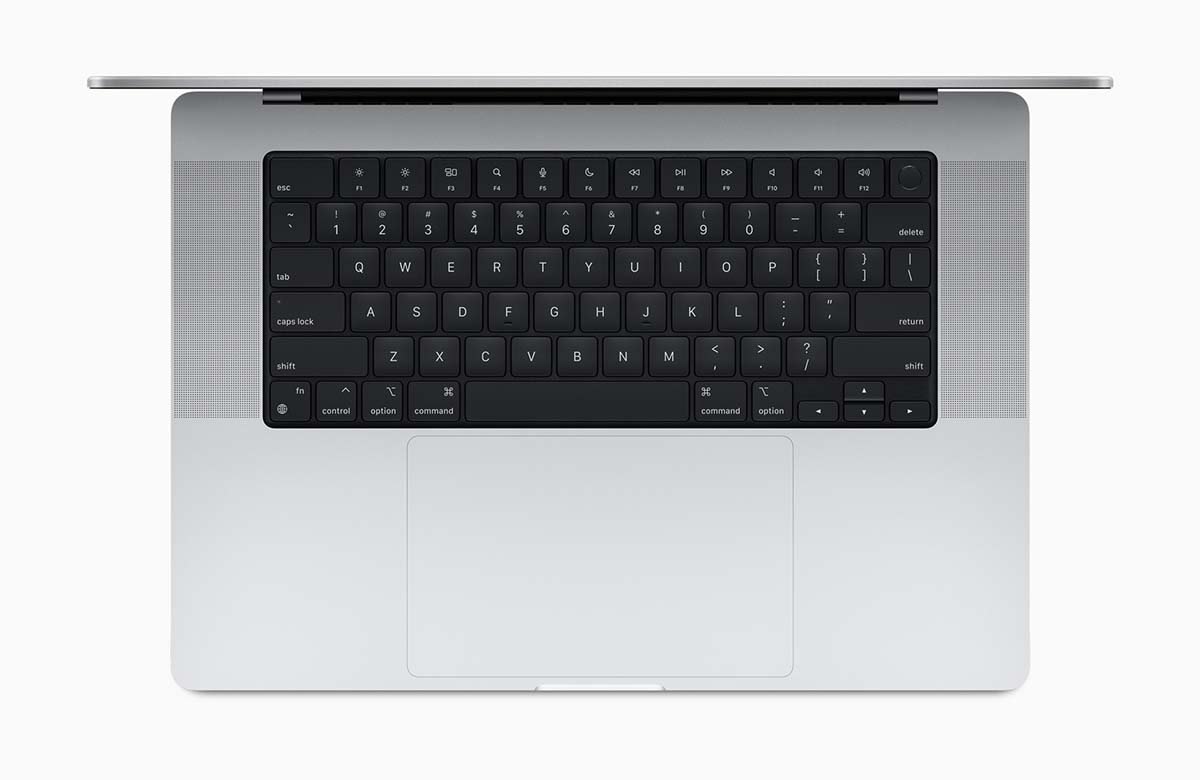 The new MacBook's return to an all-physical keyboard. Image: Apple.

A year after Apple Silicon’s M1 debut, Apple has scaled up its proprietary architecture with two new chip designs which both feature a 10-core CPU which is claimed to be twice as fast at CPU-bound tasks as the previous generation Core i9 MacBook Pro.

(There is an entry-level 8-core CPU M1 Pro, but in the 10-core version it’s notable that we get 8 high performance cores and 2 high-efficiency cores - the original M1 went for 4 of each.)

Unsurprisingly, these are the biggest chips Apple has ever made and as System-On-Chip (SOC) designs benefit from integrating memory directly on chip unlike Intel or AMD. Apple claim the CPUs deliver 1.7x performance with 70% less power consumption - which means more battery life and less heat. For graphics performance, integrated graphics vastly outperform the competition - as is to be expected given target market - but even compared against external GPUs such as the GeForce RTX 3080 the M1 Max outperforms it at 100W less power. And this is just raw power, without taking account of hardware accelerated ProRes encoding and the neural engine. In some applications, it also means 10 hours more battery life than the preceding models.

It’s possible to outfit the 14-inch or 16-inch models with either chip and there are plenty of permutations to choose from but absolutely no way to upgrade after purchase. 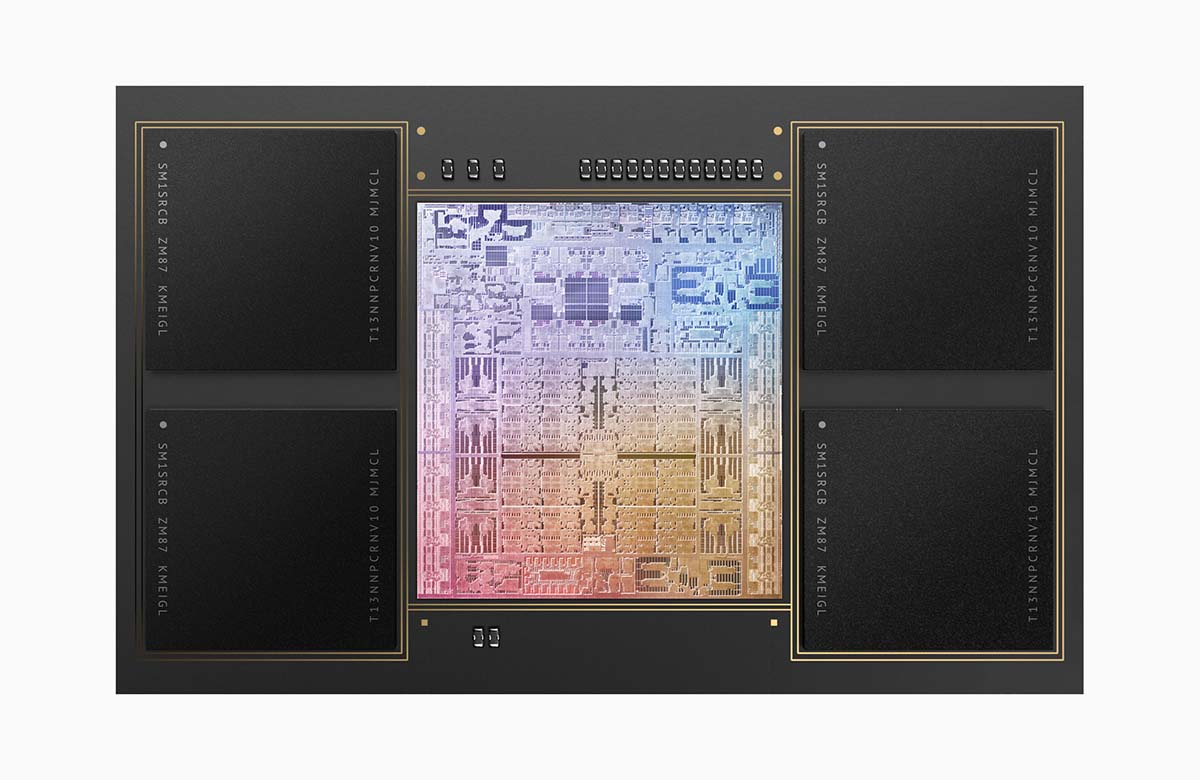 The M1 Max chip is the largest and most powerful chip Apple has made yet. Image: Apple.

Apple call them Liquid Retina XDR displays with 10,000 mini-LEDs delivering up to 1,000 nits sustained brightness and 1,600 nits peak brightness. This million-to-one contrast ratio promises dazzling HDR performance and no OLED-style burn-in, but Apple’s iPad Pro implementation suffered controversy over ‘blooming issues’ since there’s no OLED-style pixel-by-pixel control, so we’ll need to see how these panels perform. On 12.9” iPad Pro near perfect blacks and exceptional brightness were dazzling enough in most applications, but in a darkened room with white text on pure black some issues were visible. Again like the iPad Pro, there’s ProMotion - a 120hz high refresh rate, dynamically varying according to the content displayed, and with the option to disable if preferred for video editing.

The screens also feature an iPhone-style camera notch which allows for cameras which double resolution to 1080P, a larger sensor, wider angle and image processing. There was no mention of FaceID yet, TouchID is still present on the keyboard, but the Mac’s top navigation bar in dark mode allows the notch to disappear in many scenarios. 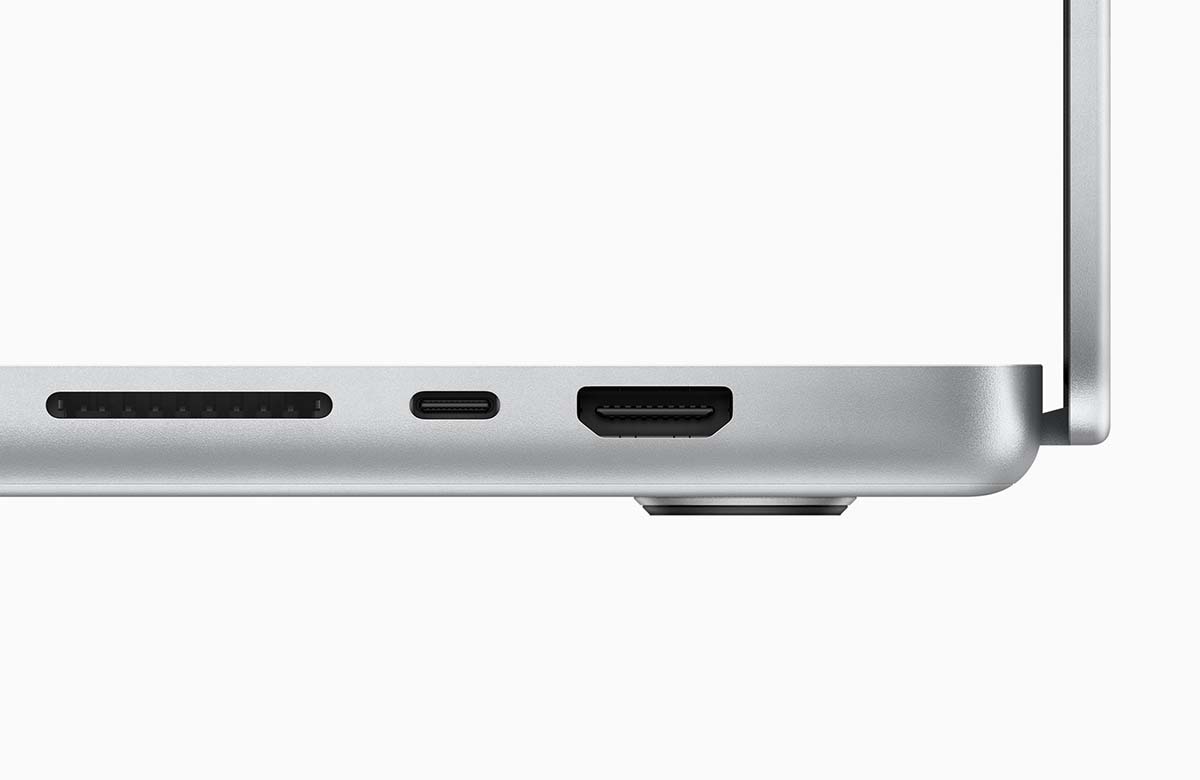 While the Job/Ive era laptops were distinguished by bold new designs that invariably looked more futuristic than anything before them, the 2021 MacBook Pro’s are unashamedly utilitarian machines shaped by the practical requirements of customers today rather than aggressively pushing toward the advanced networking ports and Wi-Fi standards of tomorrow’s workflows. In a sense, perhaps, the requirement to look futuristic is lessened when you’re no longer adapting commodity PC chipsets and are instead running with custom silicon leagues beyond comparable Intel laptops.

The new Apple mantra is no ‘adapters needed’ with HDMI 2.0, full-size SD Card Reader, headphone jack (with support for high-impedance headphones), three Thunderbolt 4 ports and an updated MagSafe design which supports fast-charging. If you leave your MagSafe adapter at home you can still charge via Thunderbolt which is USB-C compatible. The OLED TouchBar is gone and replaced by full-size function keys, while the keyboard is of course the Magic Keyboard rather than the ultra-slim and failure-prone butterfly keyboard.

Although the efficiency of the M1 chips means no fan is needed for many tasks, the chassis is built around a powerful thermal system designed to allow sustained operation at high performance. No more thermal throttling, or at least the envelope is vastly expanded while now targeting silent operation. Both machines are marginally thicker than those they replace, although look more so due to squared off design while the weight is also slightly increased by half a pound. The ‘studio quality’ three microphone system is enhanced, with a 60% lower noise floor, while the six speaker sound system with four force-cancelling woofers delivers 80% more bass and spatial audio.

Adobe famously dragged out their migration to OS X over doubts for Apple’s future. In 2021, that’s not so much a concern. Blackmagic DaVinci Resolve Studio is claimed to 5x as fast in 14” model compared to previous 13-inch MacBook Pro, Adobe PhotoShop up to 3.5x faster. Apple themselves have just updated Final Cut Pro to support editing seven streams of 8K ProRes, Logic Pro now has support for spatial audio and three times as many plug-ins, while Motion and Compressor updates result in dramatic speed improvements. For those in the Apple pro eco-system, this is only the start of optimising for Apple Silicon… but the professional market is defined by niche applications and workflows, some of which will migrate (or not) depending on developer resources. Early adopters of M1 remain mostly enamoured of its performance, while acknowledging the occasional need to work around missing plug-ins and so on. Life on the cutting edge of technology isn’t without hiccups.

As long anticipated, Apple’s bestselling AirPods have been upgraded to a third-generation model that offers adaptive EQ, spatial audio and shorter stems with force sensor controls, much like the Pro model. Battery life is increased to six hours and five minutes charge time gives one hour listening time, but at £169 there’s still no easy battery replacement. Amusingly, the new AirPods launch is accompanied by a new Apple Music plan for half the price of the standard - the catch is Apple Music Voice Plan is controlled by Siri only… There also appear to be Beats Fit Pro earbuds on the way with active noise cancelling while the AirPods Pro have an update to support MagSafe charging.

Last year’s M1 MacBooks delivered on Apple’s promises and got professionals’ attention, now the real Pro laptops are here. We’ll have to wait until 2022 and possibly M2 for pro versions of the desktop Mac mini, iMac and Mac Pro to complete the transition from Intel and provide the full line-up by which to measure Apple’s professional credentials.

Intel’s CEO Pat Gelsinger went on the record before the event saying he hoped to win Apple back by offering superior chips… that looks a tall order right now, but Apple has been haemorrhaging professional support for a while now and excellent hardware is just the beginning of the fight back.