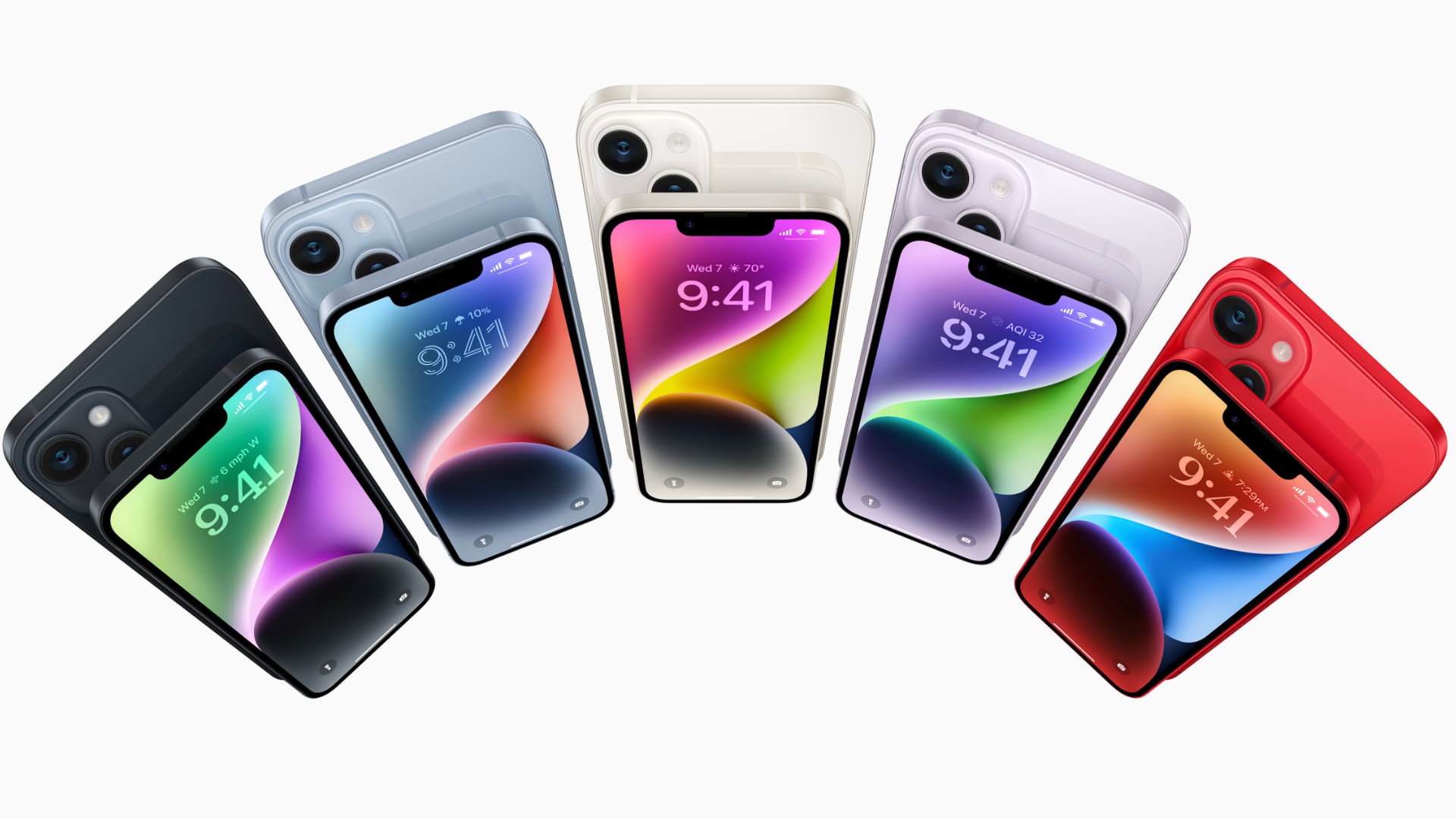 Was Apple’s much trailed ‘Far Out’ event truly far out? K Stewart is your guide to Apple’s latest slew of new releases. 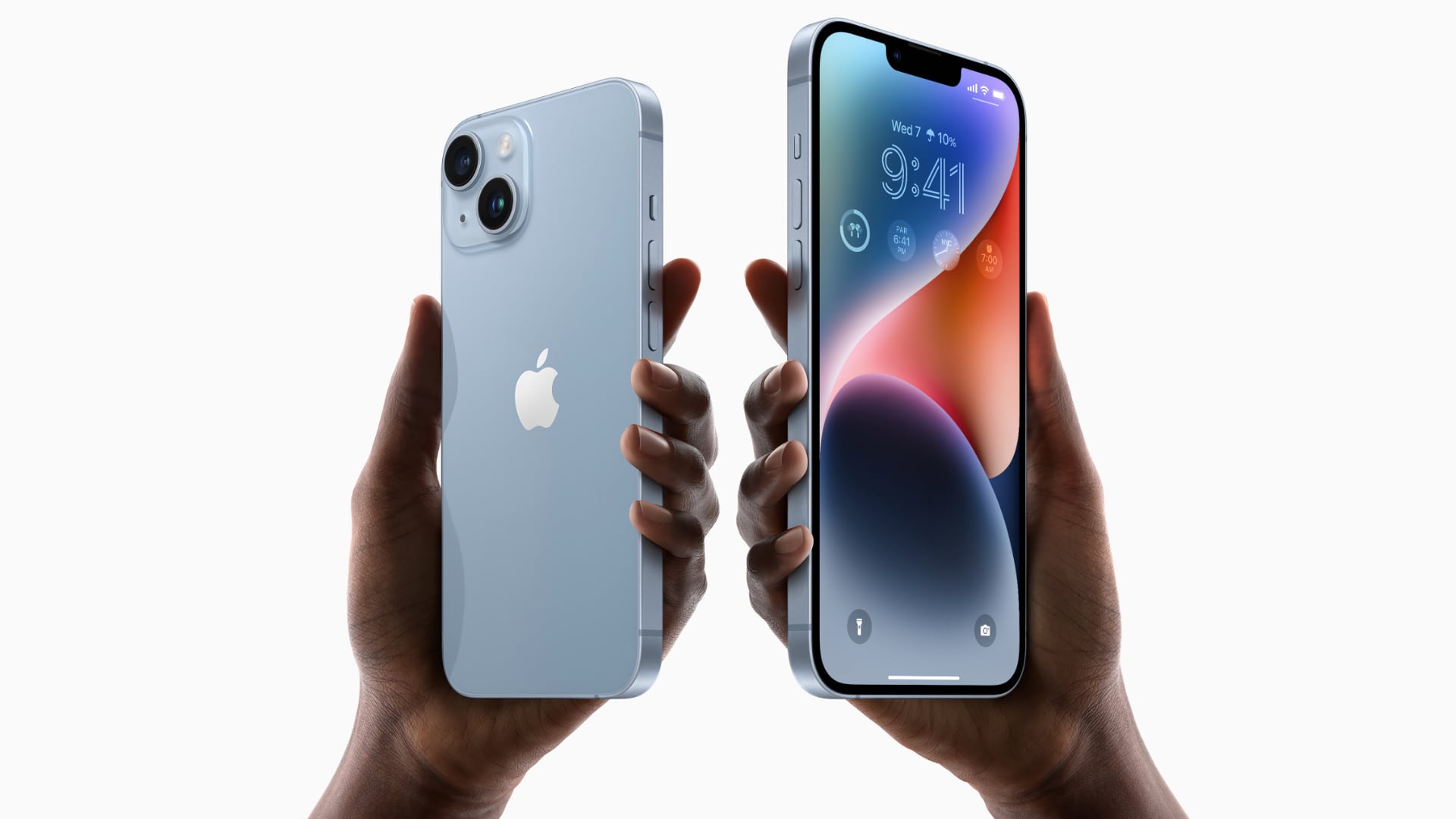 What most distinguishes the iPhone 14 is what it lacks - this being the first generation where the base model makes do with last year’s chip, namely the A15 Bionic - albeit tweaked with an extra GPU core.

There are two versions, the 6.1 inch iPhone 14 and the 6.7 inch iPhone 14 Max but no iPhone mini. The chassis design is externally the same as last year, but the internal design is revised for better thermals.

All this year’s iPhones will come with Photonics Engine that applies Deep Fusion machine-learning even earlier in the imaging process. When shooting video, Action Mode offers advanced image stabilisation.

There’s also some safety features across the range, including car crash detection (same as Apple Watch) and Emergency SOS via Satellite. Initially for the US and Canada only, this relies on a new antenna with on-screen UI to guide you into finding the nearest satellite and maintaining contact as it moves. Text messages are compressed while relay centres facilitate contact with emergency services. It also supports Find My so you can friends more easily in remote locations. The service is free for the first two years, but after that there’ll be a charge. Another US-only change is the removal of the Sim tray to go eSim only.

Sometimes the Pro models seem an inessential upgrade over the standard model, but this year marks a significant divergence. This year’s A16 SoC is exclusive to the Pro models as are the year’s most fun features.

iOS 16 delivers a radical refresh of the home screen with a vast array of smart customisation options and home-screen widgets. But only the Pro models offer an always-on screen. No need to touch your screen to see the latest widget updates such as flight tracking update or sports scores. The screen also offers 1,600 nits brightness - same as Pro Display XDR - and can peak at 2,000 nits - twice as much as before.

The forward looking camera array is comprehensively updated. The true-depth sensor is now under the screen, but rather than have separated cameras punched into the display there’s a notification window that hides and connects them. This ‘dynamic island’ surfaces all sorts of updates. You can have your music player there, a countdown timer or both. This island also animates and expands as needed with your interactions.

How well it will be supported by third-party apps is difficult to say. No-one wants another MacBook Pro TouchBar misfire, but first impressions are positive. It was notable that during the A16 presentation there was mention of dedicated silicon to drive the anti-aliasing of ‘dynamic island’ animations.

The A16 is built on a new 4-nanometer process with 16 billion transistors and a focus on power efficiency, display and camera. The display features include support for 120Hz Pro Motion as before, but also in ‘always-on’ mode a 1Hz capability. The two high performance cores are faster than before, while the four low-power cores maintain performance but deliver better efficiency. The 5-core GPU delivers a 50% boost in memory bandwidth, while the neural engine is now capable of 17 trillion ops per second.

Perhaps the biggest upgrade is to the camera system with a 48MP main camera (compared to 12MP on 8). The sensor is 65% bigger than iPhone 13. In its default mode, the iPhone uses ‘quad-pixels’ - combining the results of four pixels into a single 12MP image to avoid using up to much storage space. A16 can apply up to 4 trillion ops to every single photo. Apple’s ProRAW option is also available with 48MP support.

The housing for the camera array is the biggest yet, while a new ultra-wide camera delivers a 3x improvement in lowlight performance and the flash is a new design with 9 LEDs for up to twice the brightness.

The Pro models are the only ones to shoot video in Apple ProRes, while Cinematic Mode (24-30fps) now operates in 4K. 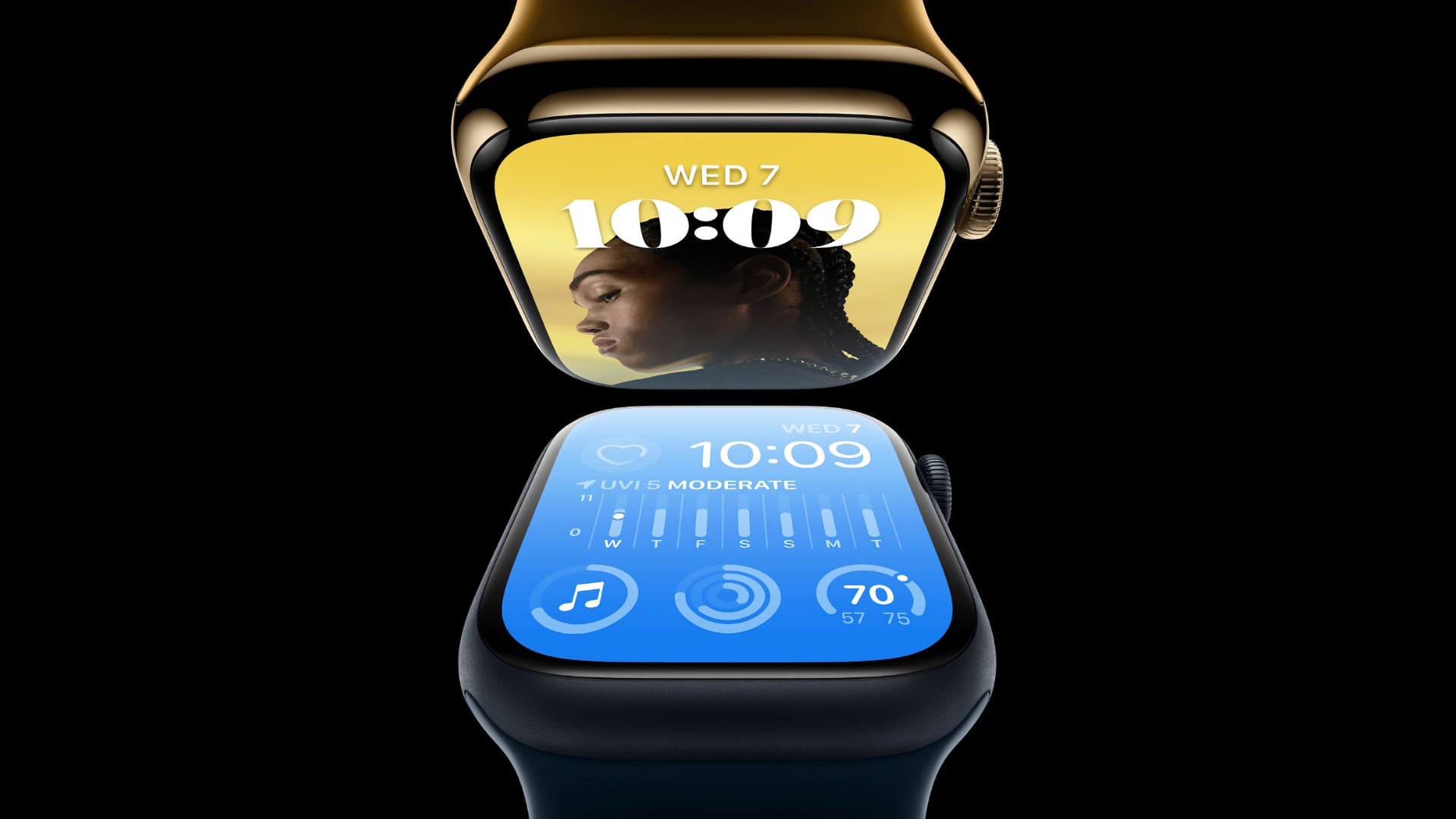 This year’s Watch refresh feels the impact of the intensive engineering devoted to the Ultra model. The casing is unchanged from Series 7 with the same dimensions, the same 1,000 nits always-on display. We do get new temperature sensors, one on the bottom to measure blood temperature and another on the face for ambient temperature. There’s a new 64-bit dual-core S8 SiP chip, but little was made of it and, unlike this year’s iPhones, the same chip is used across all models - including SE. There’s also support for detecting a car crash and calling emergency services which utilises new accelerometers and gyroscopes, while cellular models now benefit from international roaming.

Low power mode can now deliver 36 hours of battery life via Watch OS 9 for Series 4 and above. This OS upgrade doesn’t offer many marque features, but in use its tweaks to text size and animations in notifications makes it feel the best it ever has.

The refreshed entry level model starts at £259 / £299 for 40mm and 44mm versions, plus £50 for cellular. The chip is the same as Series 8, albeit without the U1 chip, and the smaller display lacks the ‘always-on’ feature of the more expensive models. Preorders are open now with availability from September 16. 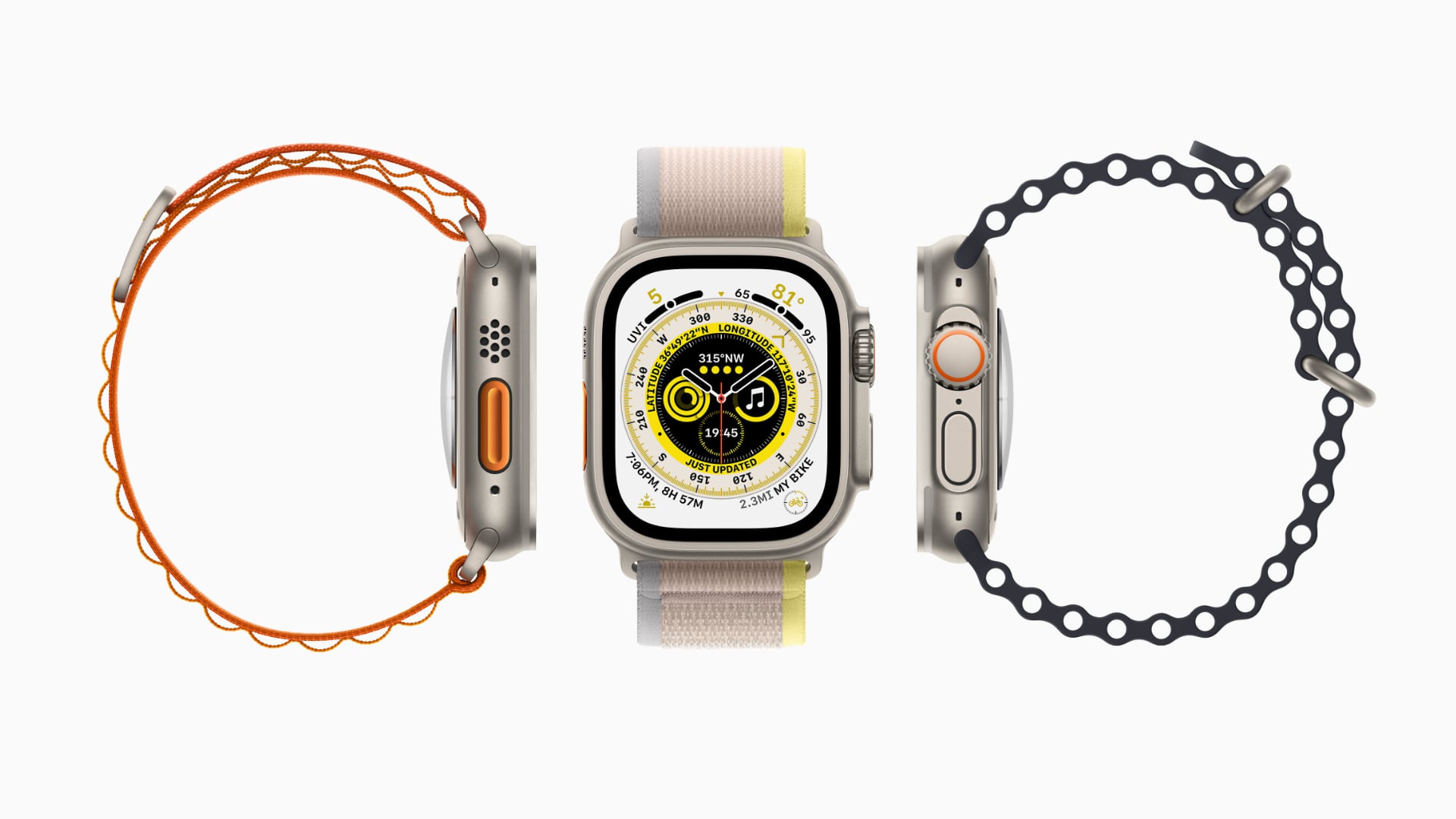 While the original Apple Watch set-out its $6K premium aspirations by simple virtue of a 24-carat solid gold casing, the Apple Watch Ultra is a ground-up re-imagining of what Apple Watch is to suit extreme sport needs.

The Watch itself is easily the biggest yet with a 49mm display and a 14.4mm depth. Titanium casing makes it feel lighter than expected on the wrist (61.3 grams), but there’s no disguising this is a big watch. A digital equivalent of the classic chunky dive watches. Battery life is 36 hours of normal use, 60 hours on low power settings.

The always-on display has twice the brightness - 2,000 nits - for enhanced visibility, while new Ultra Watch Faces take advantage of the extra space to cram in more information. A new night-time mode turns the face red to preserve night vision. A compass app allows for easier waypoint setting and even has a feature to retrace your steps if lost.

There’s a new orange Action button which can be assigned to custom functions, including a new siren feature, plus a protective raised rim around the flat sapphire face. Familiar features are also tweaked; the Digital Dial is enlarged to make easier to manipulate with gloves, the Side Button raised to be more accessible. Inside the casing there’s a GPS Antenna which supports dual frequencies for enhanced accuracy, while Dual Speakers provided improved audio volume.

It’s also EN13319 certified as a diving accessory for descents down to 40 meters and features a new depth gauge sensor. Developed in partnership with Huish Outdoors, an Oceanic+ app serves as a fully functional dive computer for recreational scuba diving.

There also three all-new bands, called Trail, Alpine and Ocean, each distinctly designed for different applications. The Ocean Band features an attachable band extension so you can wear it over a wet suit.

Apple could have made do with a ‘Pro’ model that offered increased battery size and a tweaked case design. This would’ve been an easier and more immediately profitable option. The Ultra model isn’t that. It’s the real deal. Right down to the utilitarian options - a single watch design with integrated cellular for £849. No colour options, just a variety of bands to accessorise with. Ultra bands are bigger, but compatibility is retained with 45mm, 42mm and 42mm bands. Replacing the battery is £105 compared to £85 for Series 8, any other type of repair is £509 without AppleCare.

Pre-orders are available now with units shipping on 23rd September. 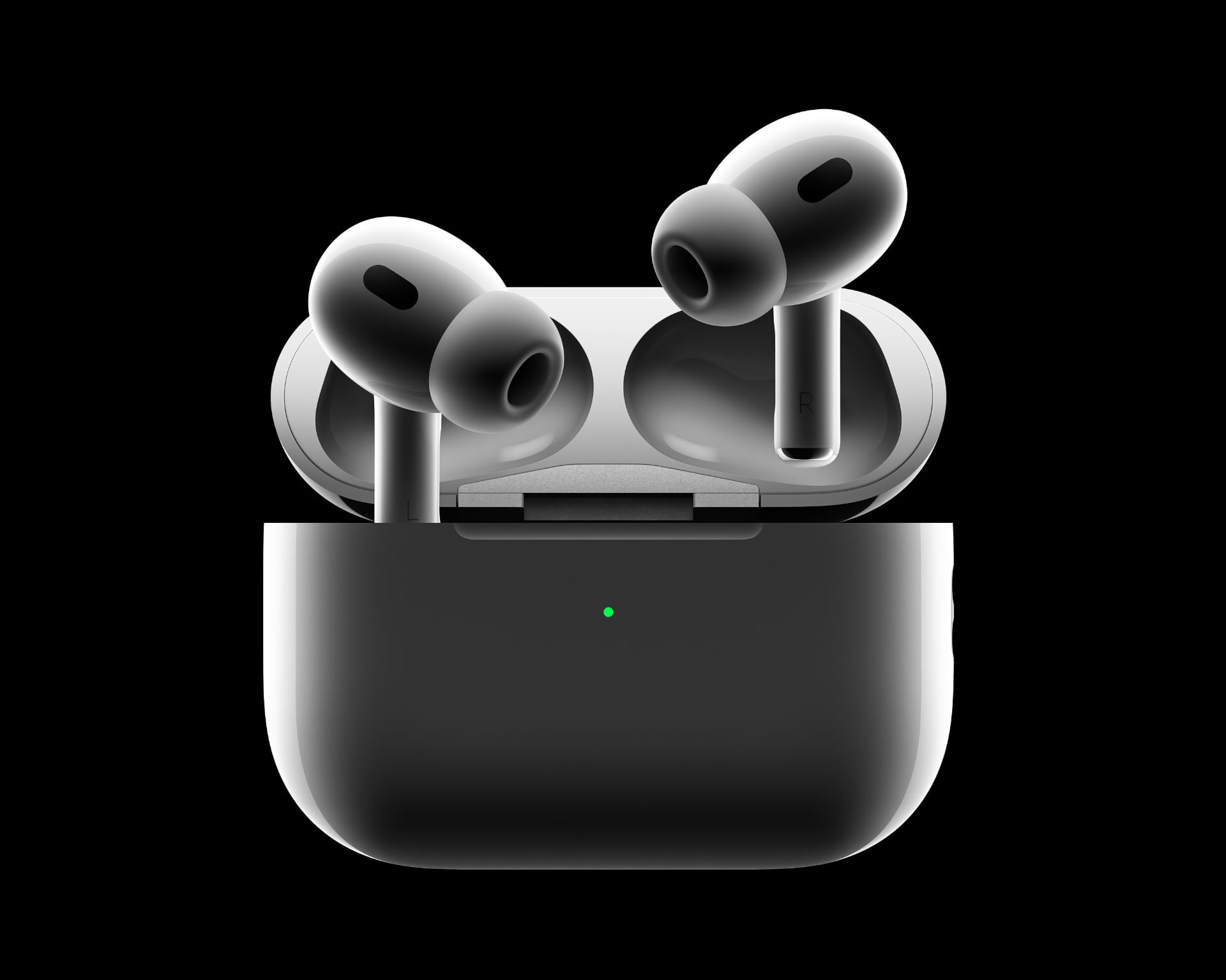 AirPods are the world’s best selling headphone range and the Pros are the most popular. The new model introduces a H2 chip that offers up to twice as powerful noise cancelling, a more sophisticated adaptive transparency mode, improved battery life (up to 6 hours listening) plus support for personalised spatial audio where you can use an iPhone’s true-depth camera to map your ear. A new low-distortion audio driver and custom amplifier support enhanced audio quality, while the case now features a lanyard clip, Find My capability and a speaker to beep so you can find it. There’s also four silicone tips to choose from rather than three, plus new touch controls on the stems.

The second generation AirPods Pro are available from 23rd September for £249.

September is always the month for Apple’s iPhone refresh to dominate, but we’re still waiting on the all-new MacPro to complete the transition to Apple Silicon. There’s also new iPads to unveil in tandem with the delayed release of iPadOS 16 (with its ambitious M1-chip only Stage Manager feature). We also, along with the rest of the world, await the first view of Apple’s long-awaited AR/VR hardware.