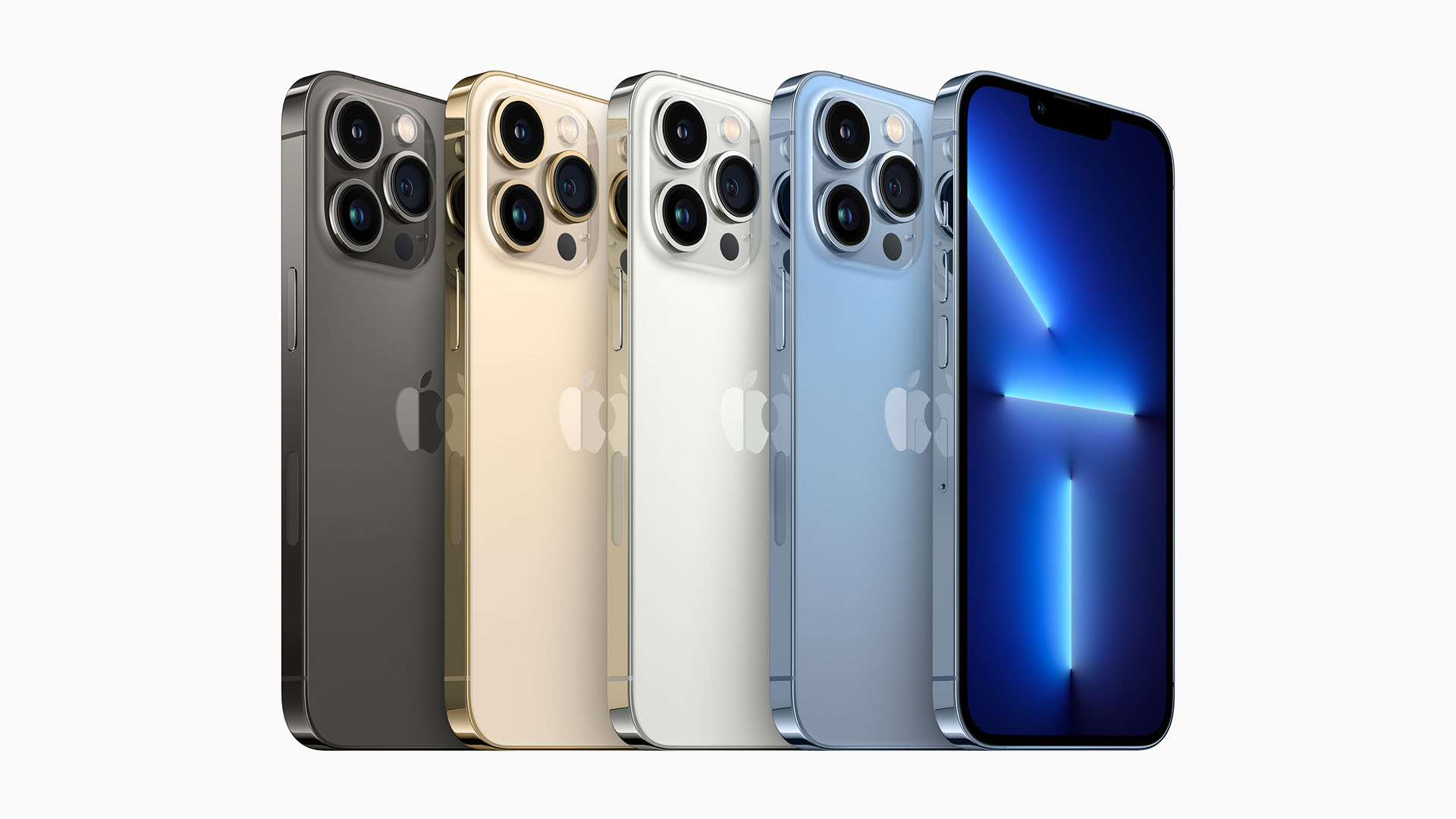 Depth-of-field in stills made its iOS debut with Portrait Mode back in 2016 and its quirks have been reduced, if not eliminated for all the AI and LiDAR depth map trickery thrown at it. Applying this to video is exponentially more difficult, as other smartphones manufacturers have found. However, we expect more from Apple - particularly with Cinematic Mode dynamically changing focus - for example, when the in-focus subject looks to someone else, the iPhone will switch focus to that person just as a cinematographer might. There will be touch controls to manually switch focus if you prefer or you can redo entirely in Photos app, since just like Portrait Mode the video will have depth map info recorded. 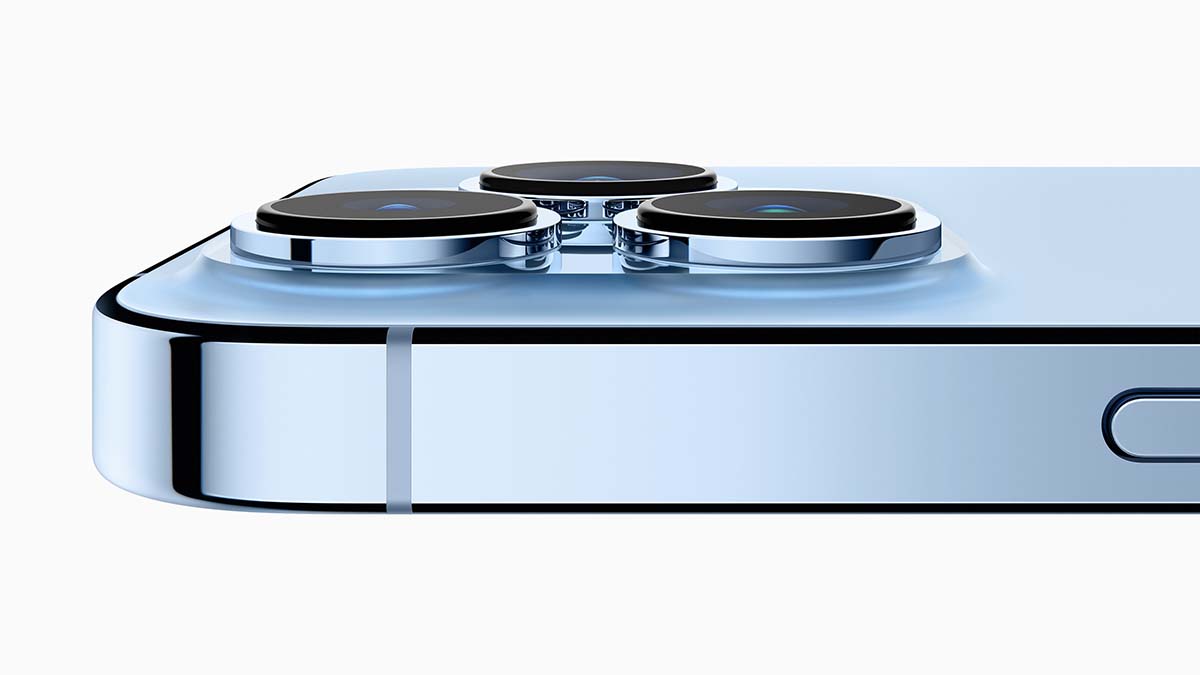 The cameras on the iPhone 13 have received significant performance boosts. Image: Apple.

Workflow is further boosted with hardware support for Apple’s professional codec - ProRes - at up to 4K at 30fps (or 1080P HD on the entry level 128GB Pro model). And alongside ProRes, there’s the ability to shoot in Dolby Vision - introduced last year - so it’s unsurprising that this year is the one where iPhone Pro gets a 1Tb storage option….

The camera system itself is all-new. The Ultra Wide camera supports Macro photography (and video) with the ability to focus at 2cm. The Pro-specific LiDAR scanner is again deployed to support Night mode, but is now available on all cameras. The Telephoto camera has a 77mm focal length and 3x optical zoom.

Another feature setting the Pro models apart is the screen with a 120Hz refresh rate which Apple first deployed on iPad Pro. To conserve power, the refresh is adaptive depending on what’s happening on screen - browsing an article could see refresh dip to 10Hz.

On the standard iPhone 13, the cameras are much the same as last year but low-light performance is significantly enhanced by a switch from optical image stabilisation to the sensor shift technology previously used on iPhone 12 Pro Max. Photographic Styles also appear, allowing you to create your own default looks.

For cinematographers who like experimenting with smartphones the iPhone 13 Pro is going to be the one to get. Video journalists will also be interested in this alongside the Alpha’s and Canon DSLRs crowding out pro camcorders in the low-end market. 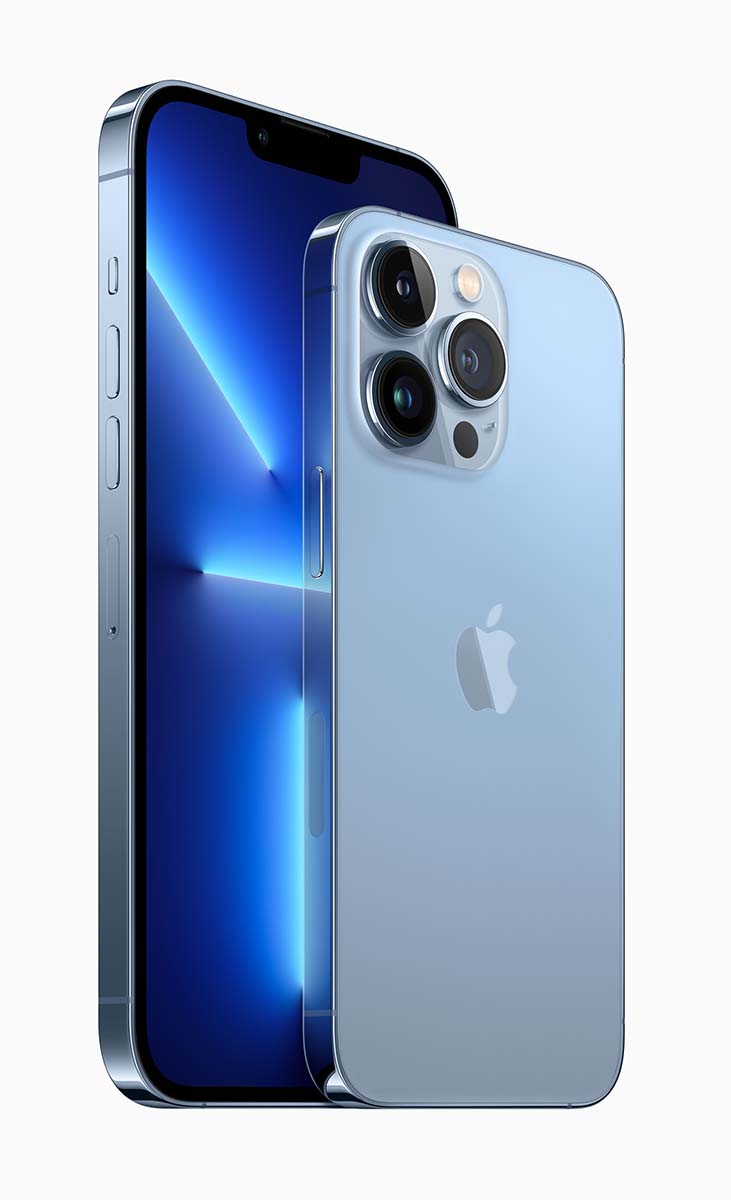 The iPhone 13 design looks almost identical to the 12, however the inside has received major changes. Image: Apple.

In iPhone sales terms, these are ultra-niche markets, so what else is different? Colours apart, the design is much the same. The Pro gets stainless steel, the standard has aluminium. The sensor notch is 20% smaller, but there’s no on-screen Touch ID

According to Apple, the main chassis change is internal with a comprehensive overhaul allowing for a significantly bigger battery. The iPhone mini gets a 1.5 hours endurance bump, while the standard iPhone and iPhone Pro Max is up to 2.5 hours longer. This is a big jump, so it’s interesting to note that this year’s A15 Bionic is being marketed as up to 50% faster than the leading competition, the GPU 30% faster. We’ve grown used to A-Series chips thrashing the competition, so these figures seems more than usually meaningless. It’s likely then this year’s remit was efficiency over performance and, given the A-Series performance advantage, it’s a worthy trade-off. The 16-core neural engine, at least, gets a specific bump - 15.8 trillion ops up from 11 trillion in A14.

It’s also worth noting that the battery life comes alongside enhanced supported for 5G with more bands, although the ultra high-speed mmWave 5G is only available on models sold in US - just as with the 12. The 5G capability and relative lack of major new features help explain why Apple emphasised big carrier trade-in offers. This year’s iPhones may be the most affordable for a while regardless of apparently unchanged pricing starting at £679/£779 with iPhone 13 (5.4/6.1inch) and £949/£1049 for iPhone Pro 13 (6.1/6.7-inch) with entry level 128GB storage. Pre-orders open on the 17th and ship on 24th. 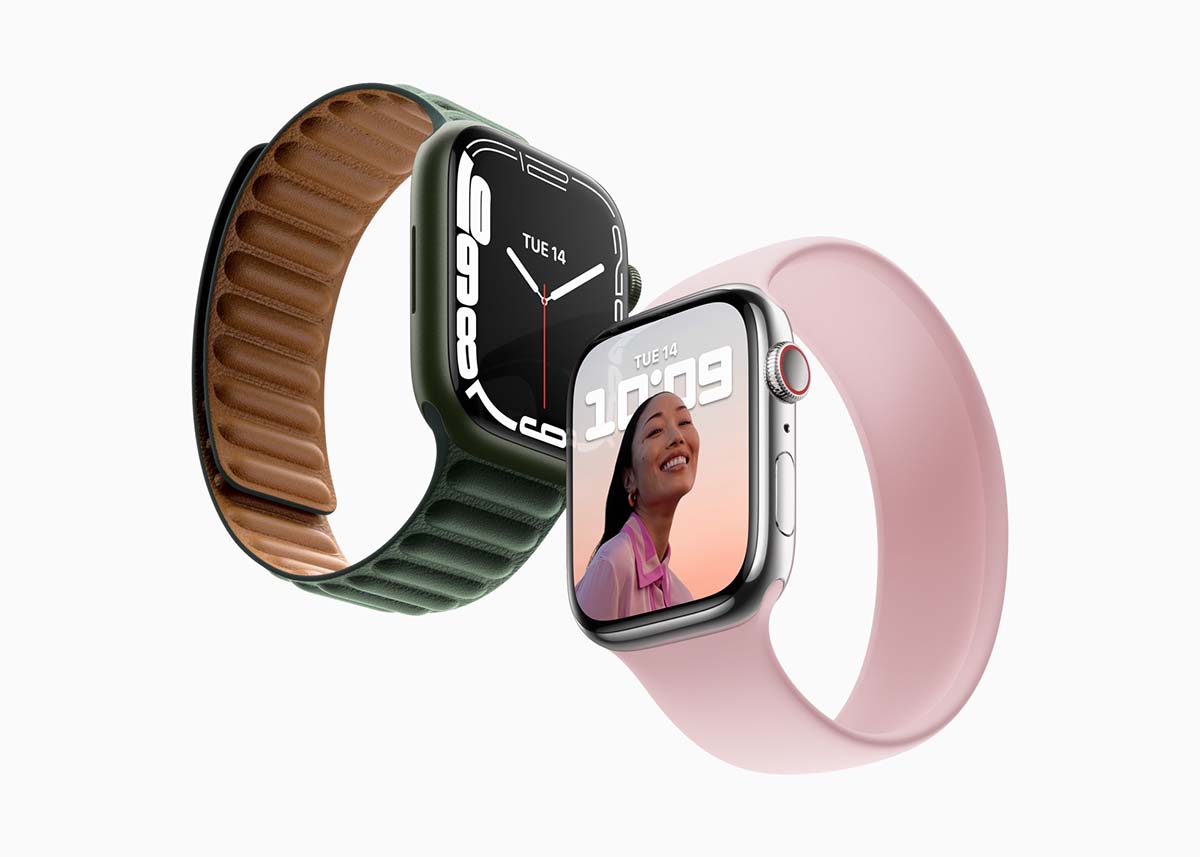 Prior to launch the talk was of a flat-sided new design to match iPad Pro, which while not the most practical for a watch indicated something fresh. The reality is a new retina screen with 20% more screen area and 40% thinner bezels with a chassis that’s a subtle refinement rather than bold new direction. Model descriptions increase by 1mm - to 41 and 45 - but straps remain compatible. The display is more crack resistant due to ‘stronger geometry’ and it’s IPX6 dust resistant for the first time, with 33% faster battery charging.

The 7’s SOC appears to be exactly the same as the 6, which isn’t entirely unprecedented and some previous updates have been minimal, but we do get some new fitness modes. Biking was promoted, which perhaps has added value after Apple announced excessive vibration can damage iPhone cameras. Availability is scheduled for Autumn and prices aren’t yet announced for UK. 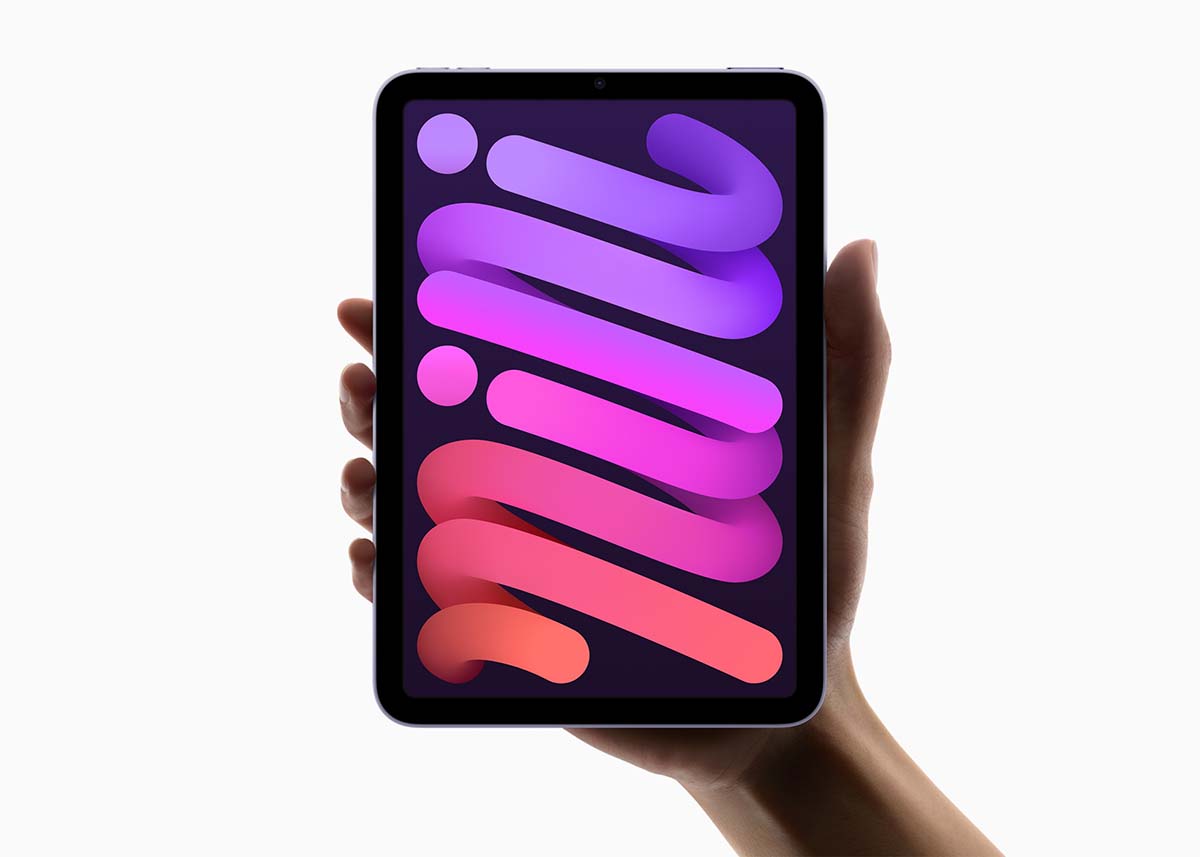 First introduced in 2012 with an instantly classic slimline chassis, the mini saw regular updates until 2015 and then got frozen until a very modest 2019 refresh. The 2021 model is by far the biggest refresh to date, ditching the home button and adopting the iPad Air’s thin bezel design with Touch ID side-button. Thinner bezels allows for a 8.3 inch screen size compared to 7.9 previously, there’s landscape stereo speakers, Wi-Fi 6, 5G cellular option and a 12MP Ultra Wide camera supporting Center Stage - introduced last year on iPad Pro and intelligently tracking people within frame. Lightning is ditched in favour of USB-C, easing connection with cameras and other peripherals. One indication of how long it’s been since the Mini was properly updated is the A15 chip is 80% faster than the A12 in the last mini. This means a price bump with the 64GB base model starting at £479. Orders are open now with delivery due next week. 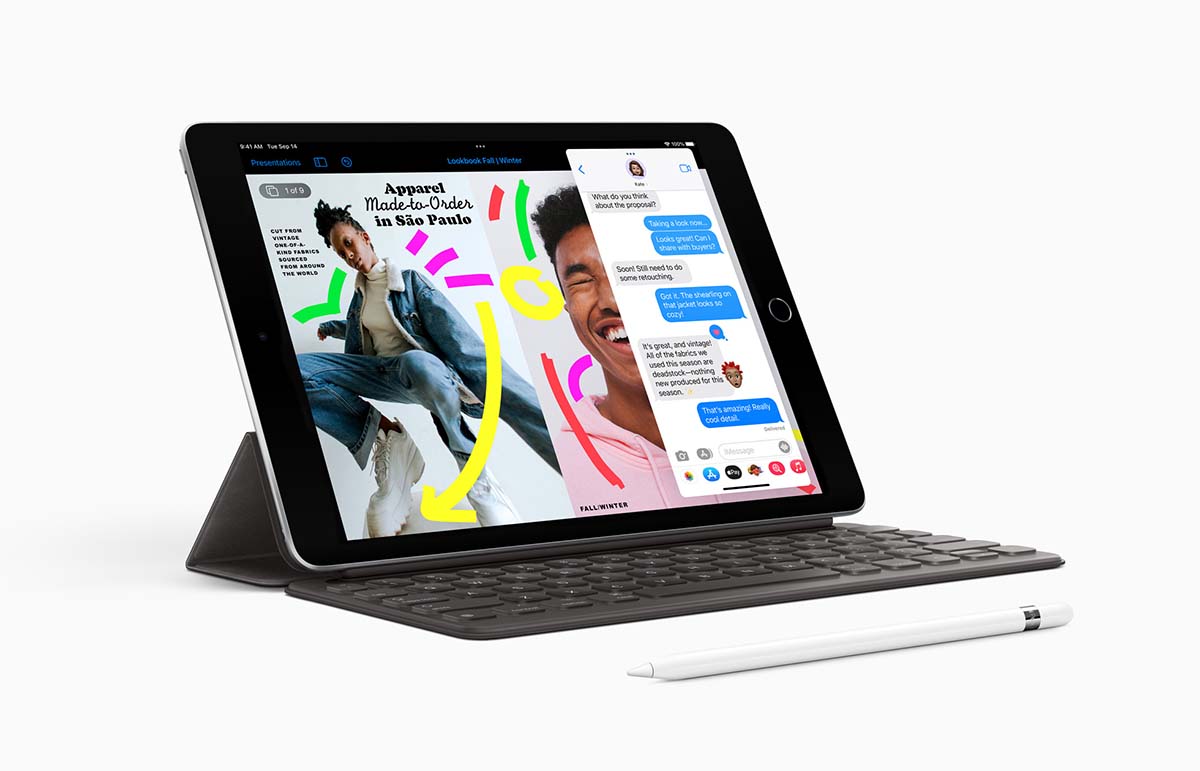 The chassis remains the same, including the familiar Touch ID home button, but the price remains low and there’s valuable improvements. Entry level storage is doubled to a much more usable 64GB, an improved forward facing Ultra Wide 12MP camera offers Center Stage and the display has TrueTone.

Annoyingly, there was no mention of RAM - customarily kept low for iOS but now vastly increased on Pro models. The iPad supports Apple Pencil and Smart Keyboard, but third-party options are much more priced to entry-level. Pricing starts at £319 with availability from September 24th.

While professionals may be intrigued by the iPhone Pro’s new features, what we’re really waiting for are pro Macs. The recent update of Resolve, with native M1 support delivering a 3X performance boost and support for 8K video, has only whetted appetites for pro models with higher RAM options, better multiple monitor support and, of course, an M1X chip with more cores, more performance. Expectations are for another Apple event in October with redesigned 14 and 16-inch MacBook Pro’s plus Mac mini.