Apple has just given a major upgrade to its Apple Music service for many users using newer devices — and it’s done it for free.

Apple has raised the bar for streaming audio fairly significantly with the news that from June it is going to offer both high-quality lossless audio and support for spatial audio through Dolby Atmos to its subscription-based Apple Music service. What’s more, it’s doing this for free. Pretty much all audio subscribers have to do is go to Settings > Music > Audio Quality and opt in to select different audio resolutions for different connection types and speeds.

Based on the ALAC file format, the new lossless audio starts at CD quality, 16bit/44.1kHz, and goes all the way up to 24bit/48kHz natively on Apple devices. There is even a setting above that that takes it up to 24bit/192kHz, which Apple refers to as Hi-Resolution Lossless, but that’s fairly audiophile only and will require adding a DAC to your set up.

20 million songs in the Apple Music catalogue will be available in lossless formats at the start, ramping up to 75 million songs by the end of the year. Users then have to find a device that will play it back. There is a tiny wrinkle here in that not every device in the Apple ecosystem will support lossless audio. That that list includes the original HomePod is no huge surprise given its increasing age; that it includes the Homepod Mini perhaps raises a few more eyebrows; that it also includes the $549 AirPods Max over-ear headphones is frankly a bitflabbergasting.

In fact, no AirPods at all will play the lossless audio as they rely on the AAC codec over Bluetooth to dream their audio and that simply doesn’t have the bitrate to support it. To achieve that Apple is either going to have to come up with a new codec or add WiFi support (weirdly the AirPods Max can’t even support it when plugged in due to complex analogue/re-digitization issues).

However, spatial audio is supported. It will play by default on any AirPods or Beats units running the H1 or W1 chips (it has to be selected don others), as well as the built-in speakers in most recent Apple devices (though not desktops by the looks of it so far). It’s also supported by the Apple TV 4K when hooked up to a compatible set. All of which gives rise to the impression that Apple believes that maybe spatial audio is the real killer app here. 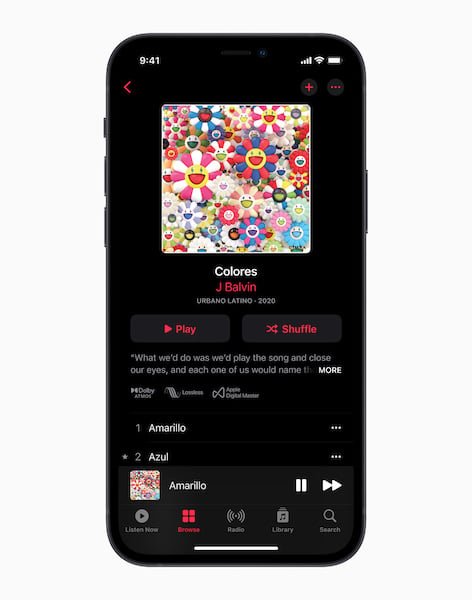 If it is then there’s an interesting parallel to the video side of the business, where plenty of leading companies and organisations such as the EBU reckon that it’s the HDR component that is by far and away the most important part of the 4K HDR offering.

Apple promises ‘thousands’ of spatially mixed songs across all genres at launch and is working with artists and labels to add new releases and unearth more catalogue tracks. A special set of Dolby Atmos playlists will help listeners find Atmos mixes, while albums that are available in Dolby Atmos will have a badge on the detail page for easy discovery.

Obviously, all this has started a bit of a quality arms race amongst music services. Amazon was the first to react, announcing that its Amazon Music Unlimited subscribers can now upgrade to its highest quality streaming audio, Amazon Music HD, for free. The majority of the 70 million songs in the Amazon Music HD catalogue are in standard 16-bit/44.1kHz files ( in other words, CD quality), however. Only 7 million songs are in what it calls Ultra HD, which ranges up to 24-bit/192kHz, but it is growing.

Elsewhere, Spotify has already unveiled plans to launch a new HiFi Tier, at least in what it refers to as ‘selected markets’, though pricing is yet to be announced. And Tidal has a Tidal Masters tier which comes at a $10 monthly supplement.

But Apple seems to have done here what Apple does best, use its size in the market to completely change the game and leave everyone slightly struggling in its wake. It’s not so much that it’s adding the services, it’s that it is doing so for no extra charge that is the real potential revolution. And in an era where some TV services are still charging extra for HD, that is a welcome upgrade.