AJA Ki Pro GO review: Solid and well engineered, and virtually anyone can use it 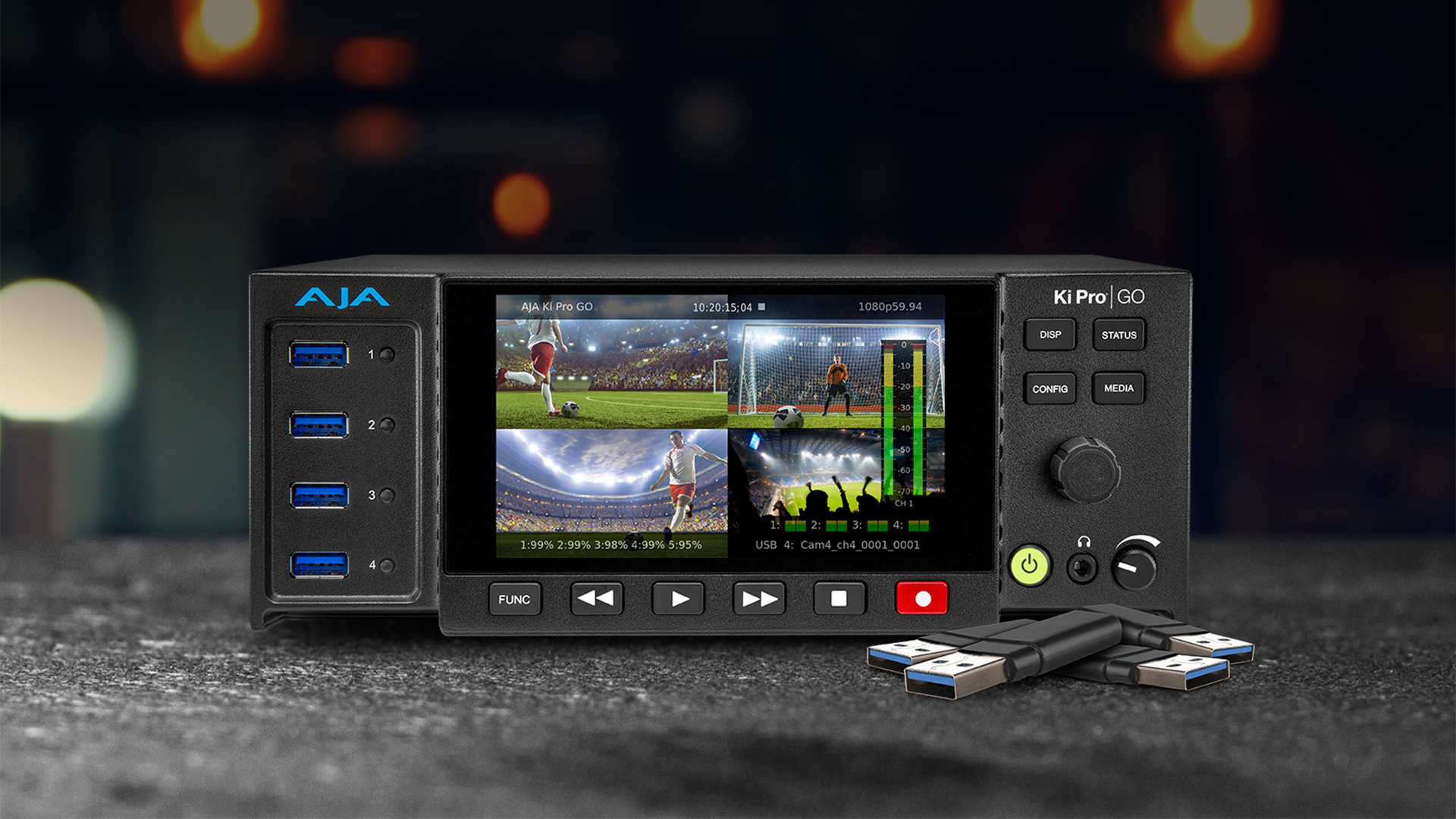 I must confess that when first seeing the product at NAB 2019 in its first firmware version 1.0, I was a bit perplexed. In a world where 4K shooting has become the norm and we’re now even talking 8K and beyond, why bother with SD or HD 1080 recording? But just listening to AJA’s press briefing for a few minutes helped move me from my production mindset to the needs of a broadly different range of users.

Ki Pro GO is a remarkable device that can accept up to 4 HDMI and 4 SDI video inputs and allows you to record any combination of 4 total inputs simultaneously to up to 5 USB devices (4 primary channels and 4 redundant back up channel recordings) in resolutions up to 1080 in various bit rates, with MP4 wrappers and available for immediate playback on any device which plays MP4 files. In other words, this is the 21st century broadcast/industrial VTR.

Let’s just start with the device itself. Like all AJA products, it is engineered for professional use. It can sit standalone or be rack mounted with the KPU Shelf. The rear panel hosts dual 4-pin XLR DC in from either the included AC adapter or from a battery source. With its mission-critical design, power supplies are redundant. And even if there is a power interruption, the unit restarts automatically after power is restored and it preserves the last video frame recorded.

Additionally, the rear panel hosts the HDMI and SDI inputs, an additional USB port for redundant recording as well as a LAN port. AJA products all offer configuration via a browser interface and with Ki Pro GO, it is quite simple. Either connect the device to a router or directly to host computer via ethernet crossover cable, browse the configuration menu to determine device’s IP address and just enter that in a browser. I connected via my ethernet switch, confirmed that Ki Pro’s settings were for DHCP, ascertained the IP address from the menu and entered that into Firefox. The Ki Pro UI appeared immediately, and I was able to configure the device perhaps a bit more directly than via the front panel.

Also on the rear panel are XLR audio inputs for overriding source audio input. And there are four SDI outputs to loop out to other devices as well as HDMI and SDI monitor outputs. That monitor output can be set up for any single channel or for a quad split of the four recording channels during capture.

So, let’s turn for a moment to the front panel and configuration options.

There are 4 USB 3 ports on the front which will support USB SSD drives (I for example, have a Samsung T5 portable SSD) as well as recommended thumb drives. A large display screen shows configuration menus, error messages and up to 4 inputs in a matrix. Note that this is not a switcher allowing choice of which input is recorded. That would be nice but would add a level of complexity and cost to the unit. It’s not really what Ki Pro GO is designed to do. Users wishing to switch multicam could easily use even a simple switcher and the Ki Pro GO as the switched video recording device.

I note that for many users configuring via the browser UI will be simpler and less daunting for non video engineering types. I had noted that Ki Pro GO is like a 21st century VTR, and in its menu structure it is also reminiscent of a pro VTR. Lots of options but lots of menus and submenus can confound some of the target user base. It takes me back to the last time I configured a DigiBeta deck about 13 years ago with items like Menu 25.1, 25.2, etc. The web UI has tabs for each option with easy to identify pull downs for choices. 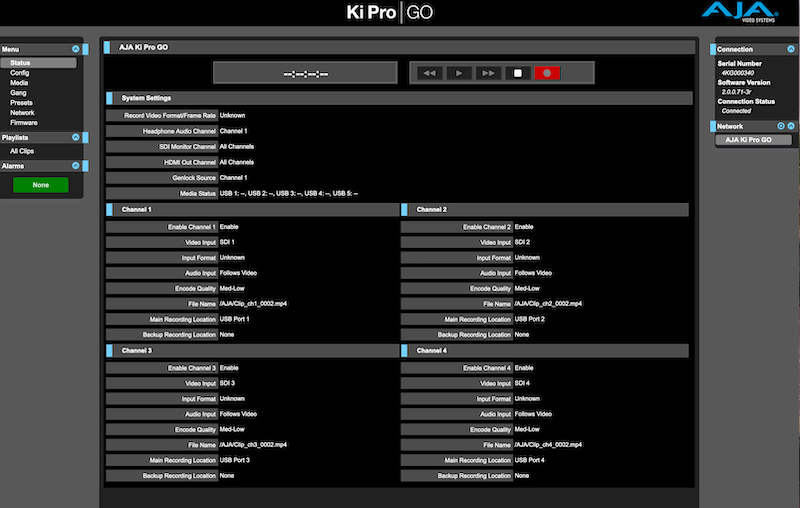 Still setup does require some work. The unit defaults to SDI and to accepting 4 inputs of SDI. If using HDMI as I did in some of the tests, the specific input channel has to be switched to HDMI. It also defaults to all 4 outputs active. Took me a couple of minutes to realize that I had to enable the specific input channel I was using and when using only one USB recording media, to disable the other 3 outputs. Setups can be saved as presets for quick recall. Autosensing certainly would be nice.

I was also met at first with a Genlock error message which seemed to disappear when I reformatted the media drive (it happened to be the Samsung T5).

Once I was over the initial configuration, recording was as simple as pressing record on the front transport button. Haven’t pressed a button since VTR days. I kind of liked it.

The Ki Pro GO can record 4 independent videos from mixed sources (you just have to specify HDMI or SDI in the configuration menu on device or browser UI) which can then be routed to whichever attached USB drive you desire.

The four input scheme can also provide genlock and allow output of a genlocked signal. I would see this as a major feature for users (such as churches or educational institutions) using low budget cameras, including DSLRs for up to 4 different angles, saving enough money on frame syncs to afford the Ki Pro GO.

Important to note that the device does not cross convert or otherwise transcode files. It will only play out one single channel at a time, rather than all 4 channels.

Where will the Ki Pro GO be used?

The product is squarely in the wheel house of religious institutions, live events, education and athletics just to name a few. While of course files can be transferred to NLE applications for editing, simply the ability for, as an example, coaching staff to shoot up to 4 angles of a pitcher’s delivery, save to inexpensive thumb drives and have available both for athlete and staff immediately makes it worthwhile.

It is noteworthy that the recently released version 2.0 firmware was used in my testing subsequent to its June 2020 release. This adds 5 levels of compression settings as well as an option of 4:2:2 or 4:2:0 bit depths. AJA noted to me that this satisfies clients who were editing KiPro Go acquired material for VOD or for work-at-home projects. This represents a significant increase in image quality. 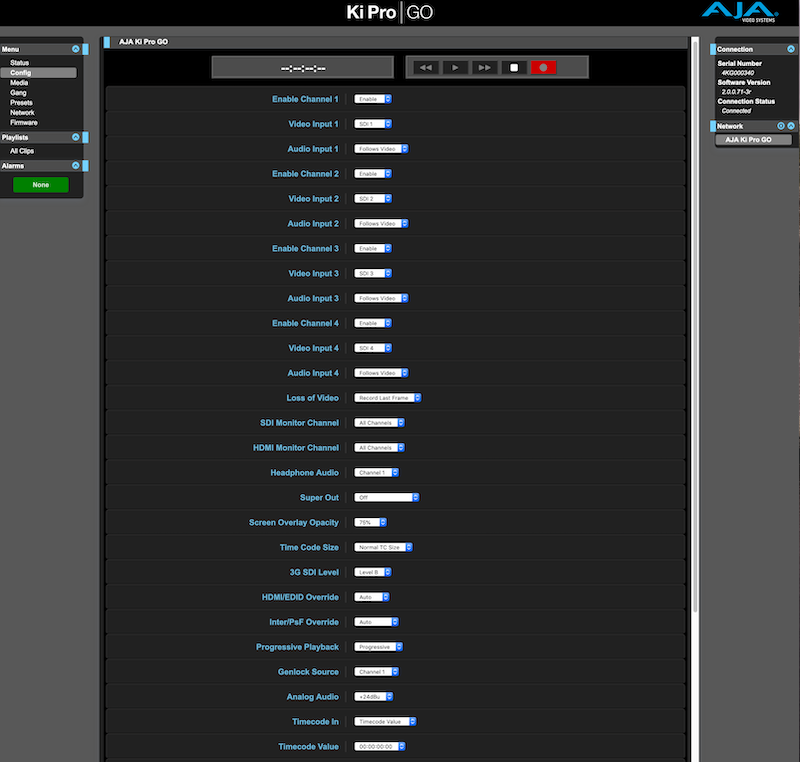 At a list price of $3995, the Ki Pro GO is an engineering achievement worthy of the AJA product line. Initial configuration might require some degree of knowledge and expertise but once configured, virtually anyone can use it. And that really is a strength of the product. The ability to deep dive into menus and configuration with absolute simplicity of use once configured means that a less-experienced operator of the unit can take advantage of powerful features preconfigured for them and leave the set up to the technical department.

Yes, it is a specialized product. And it proves that you don’t have to tout resolution as a product’s selling point. The Ki Pro GO does what it needs to do for a target market with specific video needs. And it does it in a solid,  well-engineered box. I would hope that target markets take a good look at it.