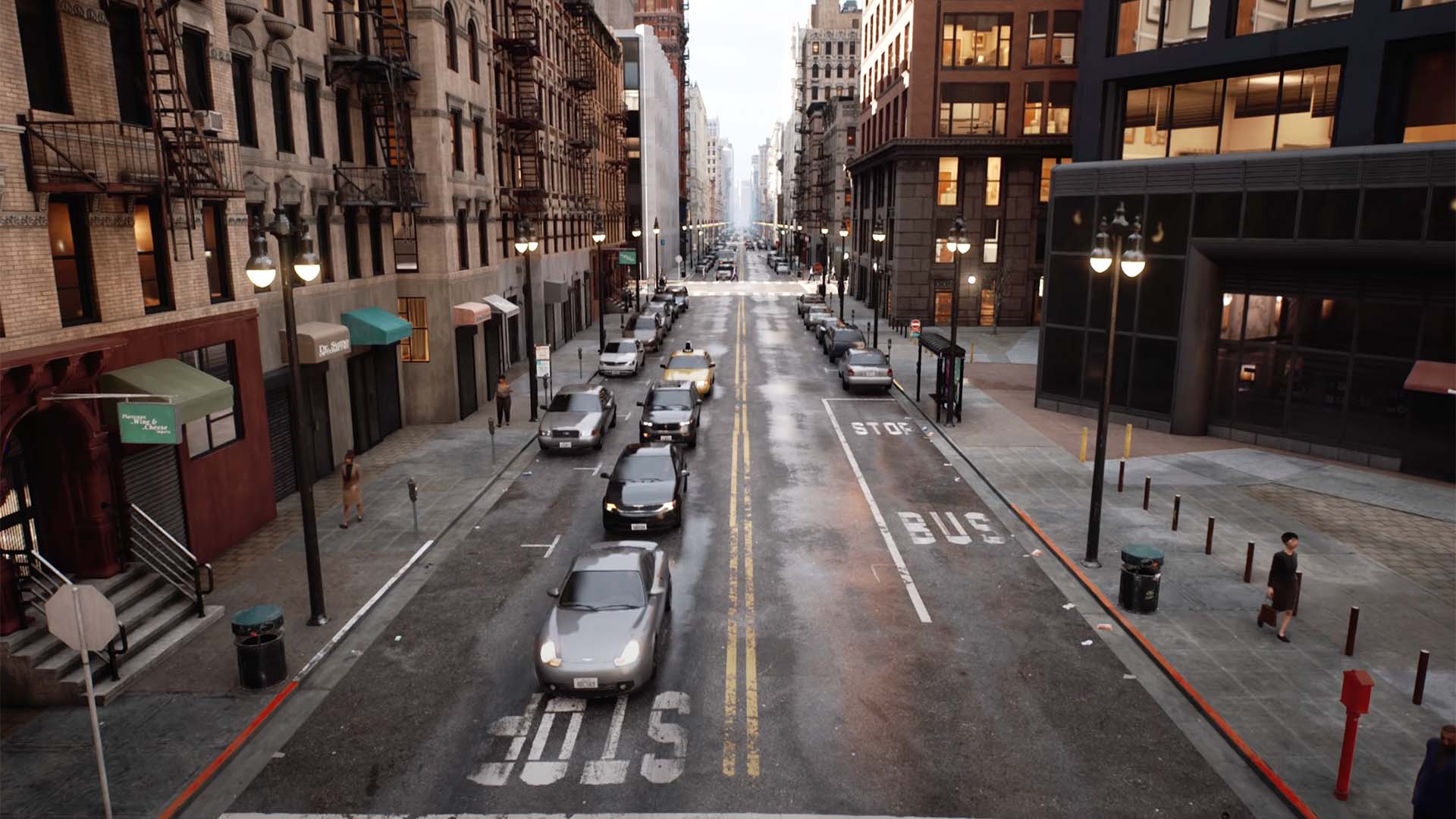 6 minute read
This is not a real city. It's entirely computer generated, in realtime, in Unreal Engine 5.

Replay: With the sheer quality of Unreal Engine 5, could filmmaking as we know it be on a knife edge?

A technological singularity is, according to Wikipedia "a hypothetical point in time at which technological growth becomes uncontrollable and irreversible, resulting in unforeseeable changes to human civilization."

Whilst Unreal Engine 5 might not change civilisation as we know it, it, and its successors, will fundamentally change filmmaking.

I feel like I'm coming full circle here. Before I was involved in video my main interest was in 3D animation and games development. In fact one of the reasons I moved into video was because the computer technology that was available to mere mortals at the time wasn't very good. Animation, particularly of human characters, was incredibly time consuming and difficult, as well as extremely frustrating. Render times were pitiful, and the results were nothing like what we can achieve today.

I moved to video because the animation was done for me by the camera. But the problem with filmmaking is that it takes money. Even a decent low budget movie is beyond the scope of most people. Yes, certainly, people like Peter Jackson cut their teeth on home grown films that they managed complete with the help of friends and family and/or getting themselves into huge amounts of debt, but whilst we often see modern examples of filmmakers on YouTube producing some pretty good looking stuff, there's a huge leap from making something only a few minutes long in a limited location and something like The Matrix or Spiderman: No Way Home.

Do we need cameras?

I'm going to call something here, and that's that I believe we have possibly reached a  point where you do not need a camera to make an epic movie. We featured a recent tech demo for The Matrix using Unreal Engine 5. The entire city in that demo not only looked almost indistinguishable from a real one, but it was 'grown' inside a computer. The modellers only needed to tweak things, but all those buildings you see were not individually modelled by people. Importantly it 'starred' the virtual avatars of Keanu Reeves and Carrie-Anne Moss, who also provided their characters 'acting', alongside an entirely computer generated 'Meta-human'. It did this almost seamlessly.

The Matrix demo is one of many appearing out there, albeit one of the most impressive, but there are also examples of realistic looking mountains, different planets, old medieval villages etc. And the thing that is most surprising about them is that they weren't created by huge teams of people working night and day for months on end, but by individuals and very small teams and then shown in realtime. Unreal Engine can be downloaded and used by anyone, and whilst there is a decent sized learning curve to using it, it is almost plug and play in comparison to the 3D modelling and animation systems of even the recent past.

Facial animation can be made incredibly realistic, with skin looking real, rather than plastic, and with fine details like individual hairs on a beard being modelled. In the video at the end of this article it is pointed out that in The Matrix tech demo this was the first time that elements such as chain link fences were full geometrical models, and not a texture as they would have been in the past.

The past reliance on texture mapping was one of the things that held back realtime graphics from looking convincingly realistic. Although advances were made, even in recent games you can see the drop in resolution as you approach certain objects close enough. With a system like Unreal Engine 5, textures are largely made redundant because pretty much everything is modelled physically in 3D space.

Unreal Engine is already being used for virtual sets, famously on productions such as the Mandalorian, but also increasingly on many others. It works because nobody watching the finished film or programme would know that the background was in fact realtime CGI. As viewers, unless we've been told, we're totally oblivious to the fact. Given how realistic it is, the next logical step is to make the entire film within the system and bypass the need for a physical studio altogether.

Such a thought will send shivers down the spine of any camera manufacturer CEO, and send earthquakes through Hollywood itself. However, the facts are this. Unreal Engine 5 is already pretty much perfectly photo real. There are still some aspects that need tweaking and improving, mainly related to human characters, but the unescapable truth is that we are right at the point where things can be made so indistinguishable from reality that very soon anyone will be able to make an epic movie from their bedroom.

If you dismiss this as nonsense, I've got some bad news for you. We're already there. Sort of. Already small teams have started using Unreal Engine 5 to make sci-fi shorts. We're still at a point where human characters veer from totally convincing to 'something isn't quite right', but this will improve and only get better. Clothing, too, will need some work. For example generating real time creases in a leather jacket as the arms move, or even physically modelling clothing layers. However, the fact we're 95% there won't put off many who just want to get their story produced. And let's not forget that Unreal Engine 5 is still an early access release, not a finished product yet.

The truly game changing aspect of Unreal Engine, and the thing that now makes it much more of a threat to traditional filmmaking, is that its graphics are rendered in realtime. When before you would have had to wait a long time for renders to complete, making full, photo real CGI animation on a Pixar level impractical for 'virtual filmmakers' as a whole, realtime animation, lighting, and environments changes that in a fundamental way. Take a look at the video below for examples of some ultra-realistic environments, played back in realtime by artist Andrew Svanberg Hamilton, using the previous version of Unreal Engine.

The interesting thing about developments like this is that the traditionalists will come out and say that it won't happen, or that the traditional way of doing things is too big an industry to disappear, that the unions or whatever powers that be won't let it happen, and that directors and crew will always like working on real locations with real cameras and real actors. All of these things are valid points to bring up. Personally I would much rather be on top of a real mountain than hunched in front of an LED monitor, so I can fully empathise with the last point.

There is one rather gaping hole in such an argument, however, and that's that the army of people who will see systems such as Unreal Engine as way to make the movie they want, without any of the traditional constraints, will just go ahead and make their productions anyway. All it takes for an industry to die is for the younger generation to see it as irrelevant.

The other problem with the argument against is that it sees doom and gloom where there isn't any. Instead of paying actors millions of Dollars, wouldn't it be better for good stories to be developed instead? It doesn't matter what a movie is made with, the story is the key thing, and many great ideas for films never get made simply because an executive with tunnel vision somewhere has deemed them not profitable enough to get a green light.

Want to set your film in Morocco when you live in New Zealand? No problem. Want to stage a huge space battle with lots of frickin' lasers? You got it!

Remember I mentioned that animating people used to be really hard? Well now you can purchase a Rokoko mo-cap suit for £400, capture the movements you need, and attach them directly to characters within Unreal Engine. Facial animation can be taken care of by devices as straightforward as your smartphone.

Will the process be easy? That's another question. Unreal Engine 5 has made a lot of steps to making human animation much better and easier with Metahuman. However Corridor Crew made a video about the trials and tribulations of producing a short film in Unreal Engine 4, which you can watch below.

You could argue that filmmaking will still require talent. Well yes, of course, that much will never change. You could also argue that we're in for a deluge of awful acting and storytelling, making it harder to find the good stuff. You'd be right again, but none of these points has anything useful to say about the fact that this will all happen whether we want it to or not.

What we're seeing unfolding here is a democratisation of both computer animation and modelling, as well as potentially a further democratisation of filmmaking as well. With regard to the latter I don't think there's really much of a discussion to be had about whether this is the way things are going. We know it is, regardless of whether you like to idea of making your movie in front of a computer or not. The change is already beginning to happen. Even if you won't be making a full film with the system, the pre-viz applications are rather astounding in their scope, and DPs can experiment with lighting and looks well before they hit the set.

Do I believe that systems like Unreal Engine 5 will take over filmmaking or make traditional filmmaking obsolete? No, I don't believe they will. Instead I can see them existing alongside physical filmmaking, giving an alternative route for creatives to tell the story they want, without the traditional constraints. If we're being realistic, physical sets and actors will always have a place, but virtual filmmaking will still have huge effects on the industry, many of them positive, while some of them could be contradictory to the idea of democratised filmmaking.

For example we will see Unreal Engine set and production design experts becoming more common. We will see character designers being in demand. All of these, and more, could push up the cost of making a top tier Unreal Engine movie. But with all that said, the heart of any good film is a good script and story,  and with Unreal Engine being free to use, most of the limitations will be with the filmmaker's imagination. Although we best not mention the idea of making any money from it...