3 minute read
Dr Evil would be proud. The Sumolight Sumolaser.

A light with a fricken laser on its head? You betcha. This is the Sumolight Sumolaser. But don't worry, it doesn't orbit in space and you won't have to pay one-million Dollars*.

Until recently, in order to create a very hard, collimated beam of light we’ve used parabolic reflectors in devices like a Molebeam. It’s the sort of thing that LEDs really don’t do very well in 2022 – yes, you can get collimated beam attachments for all the big LEDs, but it’s not exactly a parabolic reflector three feet wide with a 12K HMI in it.

A light that’s designed to do similar things while still being sort of an LED is Sumolight’s new Sumolaser, which looks and sounds like something a feature-film bad guy might use to bisect a captured spy. Lots of things have been called lasers without actually being lasers, but it seems Sumolight’s new device really is based on laser emitters. The low-level details of the engineering matter here, as we’ll see below, but the numbers are encouraging.

At the lowest level, the fundamental physics used in diode lasers is similar to the way an LED works; the difference is mainly one of scale. Individual diode lasers are extremely tiny, and while there will be a lot of them inside a high power lighting device such as Sumolaser, the small size is  helpful when trying to focus them into a beam that doesn’t diverge very much. The specification  suggests three degrees of beam divergence, which is very, very small, and difficult to achieve with conventional light sources, at least without enormous inefficiency. 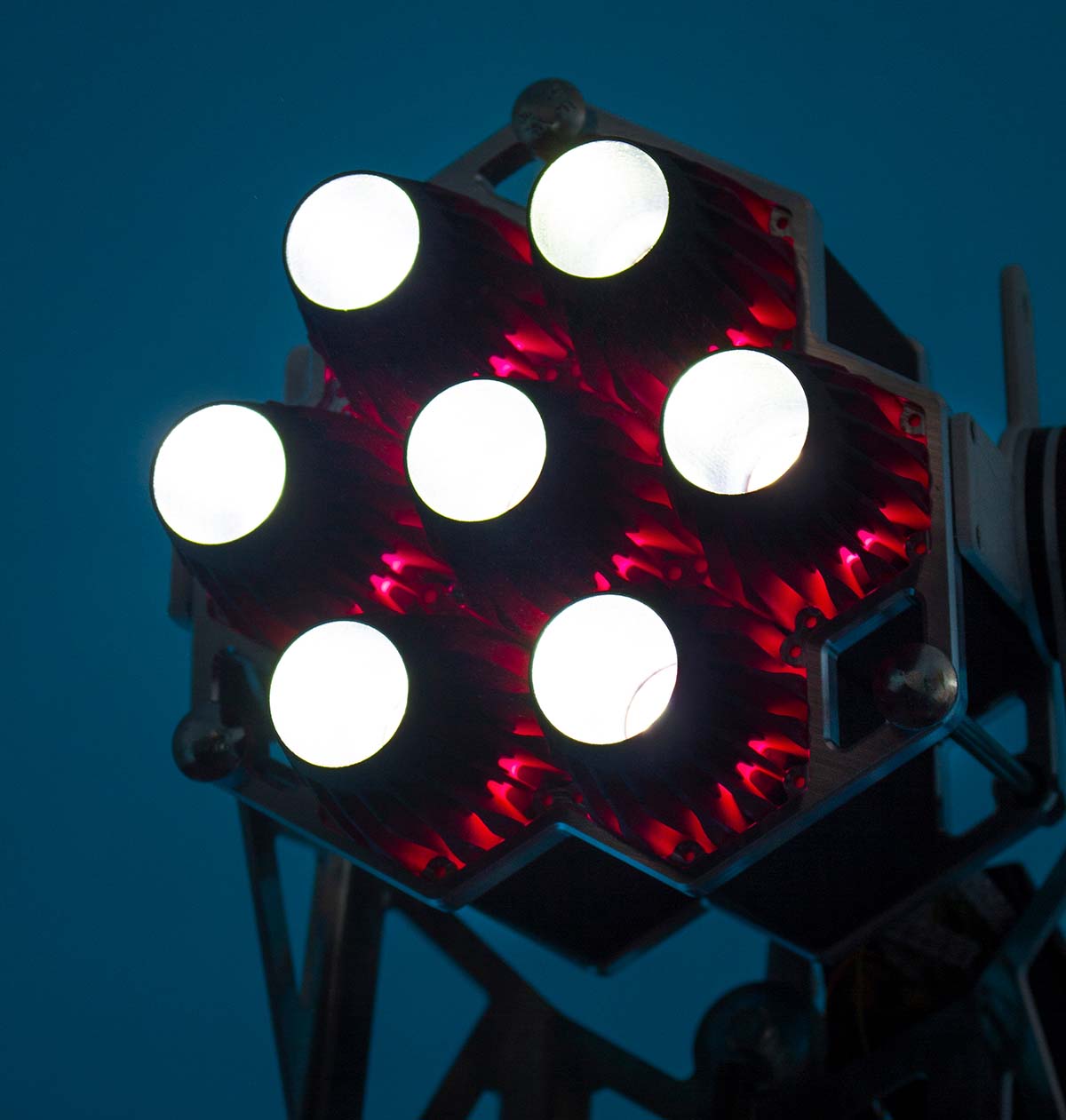 It's much better than a tank of killer sea bass.

That well-collimated beam does mean we have to be careful how we interpret the output numbers. The company’s press release makes comparisons with an 18K HMI. Given the Sumolaser is rated at 175W, we would need very specific circumstances for that comparison to be meaningful. The light reportedly measures 150,000lx at 100m, which is a big (very big) number. It’s important to understand what we’re talking about here is a point intensity measurement, since lux measure the absolute intensity at any given point within the beam, not the total output. If we’re after lancing beam effects, though, we’ll certainly get them.

Using multiple small emitters may be useful for another reason, depending how the device has been engineered. Generally, lasers produce speckle. Anyone who’s aimed a simple laser pointer at a wall will have noticed the pattern of tiny black dots in the illuminated area. That’s caused by constructive and destructive interference and it doesn’t happen with conventional lights because their output contains light waves which aren’t all moving in step. Avoiding this is an issue for Christie’s laser-driven projection people, who rely on multiple emitters (which will not be in phase with one another) to reduce the appearance of speckle. It’ll be interesting to look closely at the output of a Sumolaser with this in mind.

As a device built from sub-modules, there’ll presumably be at least some variation of intensity within the beam that might be visible under some circumstances. That three-foot mirror on the Molebeam is large – larger than the Sumolaser in any dimension – but it has the benefit of being able to create a reasonably homogenous beam that approaches the diameter of the reflector. How well Sumolaser does that remains to be seen.

The other question is how Sumolaser achieves white-light output. Cars have been released with laser-driven headlights, though that relies on a blue laser to drive white phosphor. The advantage here is that diode lasers, despite using roughly equivalent physics, work better at higher power than LEDs, which suffer efficiency shortfalls when we crank up the output, for various complex reasons. Alternatively, work going back to the early 2010s has combined multiple coloured lasers to create white light, though the colour quality, while attractive to humans, was probably a little dubious for film and TV work, much like mixing RGB and amber LEDs to create white.

However it’s been made, Sumolaser is an interesting special-purpose device and should be capable of projecting spots of light onto clouds or simulating lancing sunbeams through windows. Because it’s that rarest of creatures – a fairly new and unusual unusual technology - there are several interesting questions outstanding. We’ll look forward to getting a Sumolaser in for a few days so we can answer them.