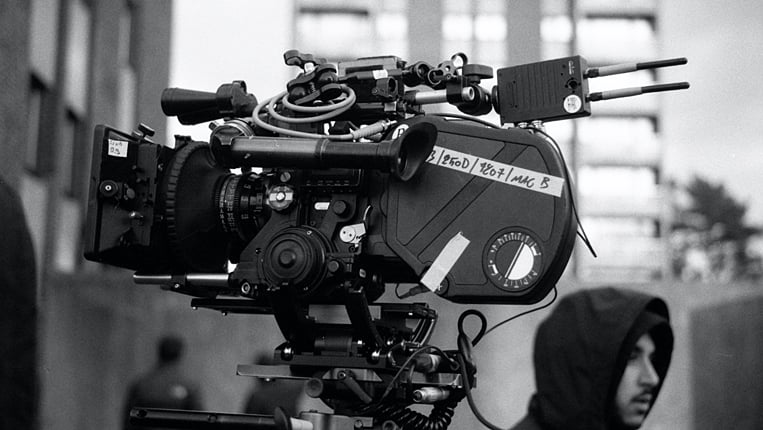 Shooting film is not always the spine-tingling, you-have-arrived moment it’s cracked up to be. I’m just about old enough that the first film I shot was Super 8, although even then we were doing it to make a point. It had the advantage of almost invariably being projected. Kodachrome has a certain look to it, to begin with, and throw that on the bedroom wall with a halogen projection bulb and the reds are red in a way that few pieces of electronics can manage. Film doesn’t need no stinkin’ triangle on a CIE chart (well, it does, but you know). It didn’t look like a mainstream action movie, though, which is what we all wanted. Modern technique makes Super 8 look a lot better than it usually did at the height of its popularity, not only because it’s possible to use finer-grained negative stock, scan it, and then stabilise it digitally. It can almost look like bad 16mm, but it never really looks like a real movie. 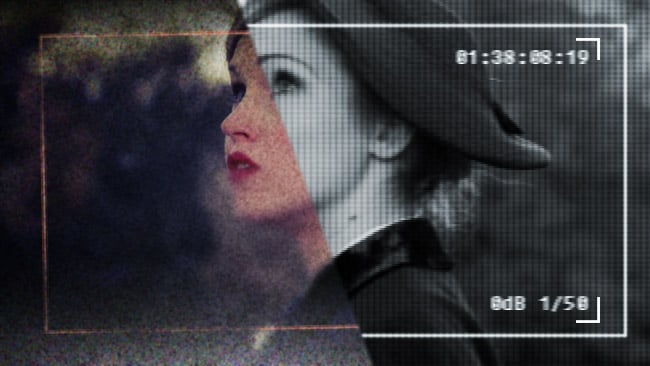 Colour and fuzzy, or mono and stripy

So very few people are shooting professionally on Super 8, a few daring wedding video specialists notwithstanding. The first time that most people shoot film intending that it does look like a real movie will be on 16mm at least and even 35, given that cameras are now cheaper than ever and 35mm short ends are more available than 16 in most markets. And, if modern scanning can make good 8 look like bad 16, can it make good 16 look like a Hollywood? On paper, sure. 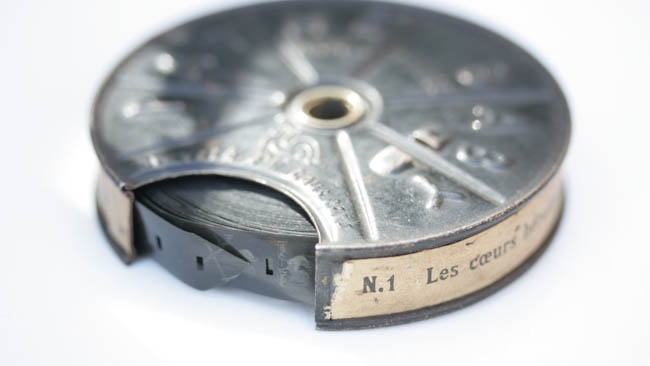 Let's all shoot 9.5mm. It's film, after all, and therefore has no downsides

In practice, the cold shower of reality is never welcome.

My first 16mm shoot used an Arri 16SR, a camera from the 1970s. It had been converted to Super 16mm using, if I’m any judge, a carefully sharpened chisel and overarm blows from a blacksmith’s hammer. As a result, any view of the right-hand side of the frame relied on leaning hard to the left and squinting and anything past the right-hand third suffered vignetting in the viewfinder that we all prayed would not be replicated on film. Tilt the camera too far and the ground glass would slip out of place, defocusing the image on one side and moving the framelines, although to be fair the framelines were barely visible to begin with and seemed to have been done with a sharpie after a few pints. 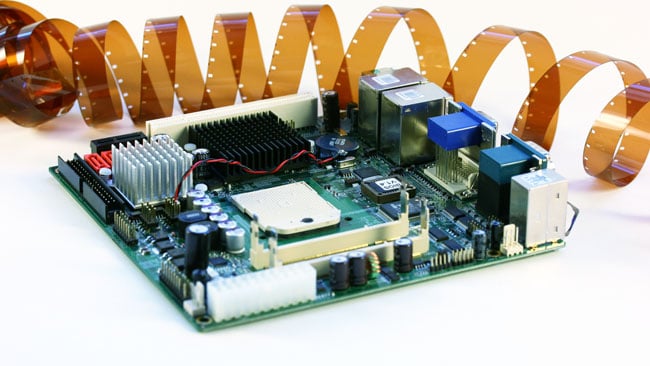 Old acquisition formats do well in conjunction with new technology

Taping the magazines shut on this camera was an obligation, not an option, because none of the latches on the magazine doors worked properly and changing lenses required ten minutes and careful levering with a screwdriver. It made a sound like a malfunctioning sewing machine and the sharp-edged square base left parallel red weals on the shoulder of anyone incautious enough to try to handhold it for any length of time. Compared to the Sony DSR-500s and DVW-790s which were popular at the time, it was a grievous lump of barely usable mechanical heartache in clockwork form*.

Let’s garnish this salad of misery with a few rolls of 7217, which is a 200-speed film (don’t really want to go faster; it’s only 16, right?) that has the cast squinting into what, by modern standards, is a veritable tornado of photons. Since this is pre-LED and we’re on location in someone’s apartment, before long, we’re all sweating so hard that the camera assistant (the estimable Anna Carrington, as I recall, who will hopefully find her personal heaven populated with much nicer gear) was concerned about dribbling perspiration all over the film while working in the changing bag. 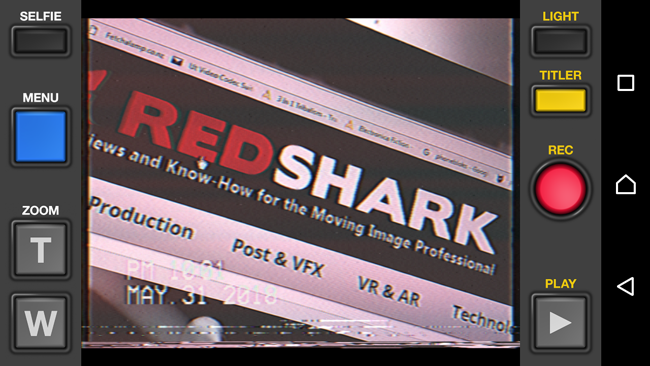 It was hard not to cackle with glee when, just a few years later, that particular SR1 went to the great rental house in the sky having fallen in the sea off Brighton.

And did the results have some spectacular power to impress? Not really. It was a bit soft — we never figured out whether that was because the camera’s flange focal distance was off or because we couldn’t pull focus, although it was consistently off in a way that spoke of something odd going on. With that viewfinder, it was impossible to know. It was fine, but it wasn’t anything special. Would it have been even less special on video? I honestly don’t think so and that’s only partly because of my much greater experience with early-2000s standard-def video cameras. 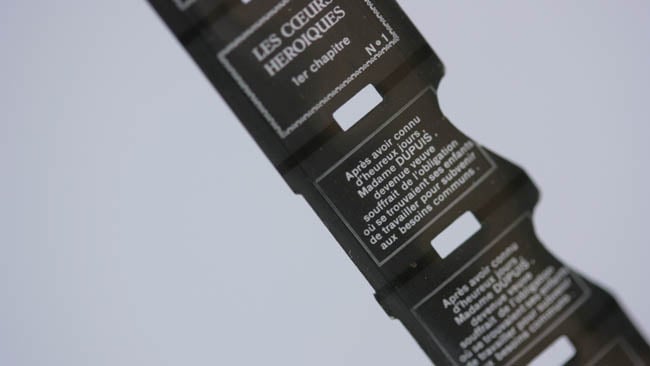 Better than 4K ProRes, except for the grain, dirt, weave, and slight lack of colour

There were upsides. Something that went nicely about that shoot was that the SR1’s owner had contacts at Arri’s then-rental facility in Uxbridge, who were very, very, very nice to us. That miserable body came from the owner-operator, but otherwise, Arri showered us with a complete shooting package which barely fit in a Volvo and wouldn’t have looked out of place on any set in the world. Kodak did us a favour. The lab did us a favour. The transfer house did us a favour. People liked it. Shooting film as a young, independent filmmaker helps make friends. That might even still be the case now.

Writing this article feels uncomfortably like a betrayal of that friendship, although neither the lab nor the transfer house involved exists any longer. We should remember the late, great John Pytlak of Kodak, without whom this would have been another PD150 shoot. John is probably revolving rapidly in his grave at every other sentence in this piece, but he would understand the subtleties we’re playing with here. Really badly shot film looks like a 1970s holiday movie no matter what the format or gear and the experience we’re talking about here is not typical of what people encounter on big productions.

Shooting film has very few drawbacks on a fully-funded production. A director of photography on a big movie has (to the chagrin of his department) almost no concern over ensuring the camera has a decent viewfinder and doesn’t make too much noise, that the pictures are in focus, or that the shoulder kit is available if we want to go handheld. He or she also has very little concern for the cost. But this isn’t really about that. Yes, film is expensive and people pursue it for all kinds of reasons. But is there somehow some unknowable, indescribable special factor behind it? Eh, maybe.

Is it worth the privations? That’s harder to say.

* The SR1 was, barely, in the world of battery power, but it felt clockwork.