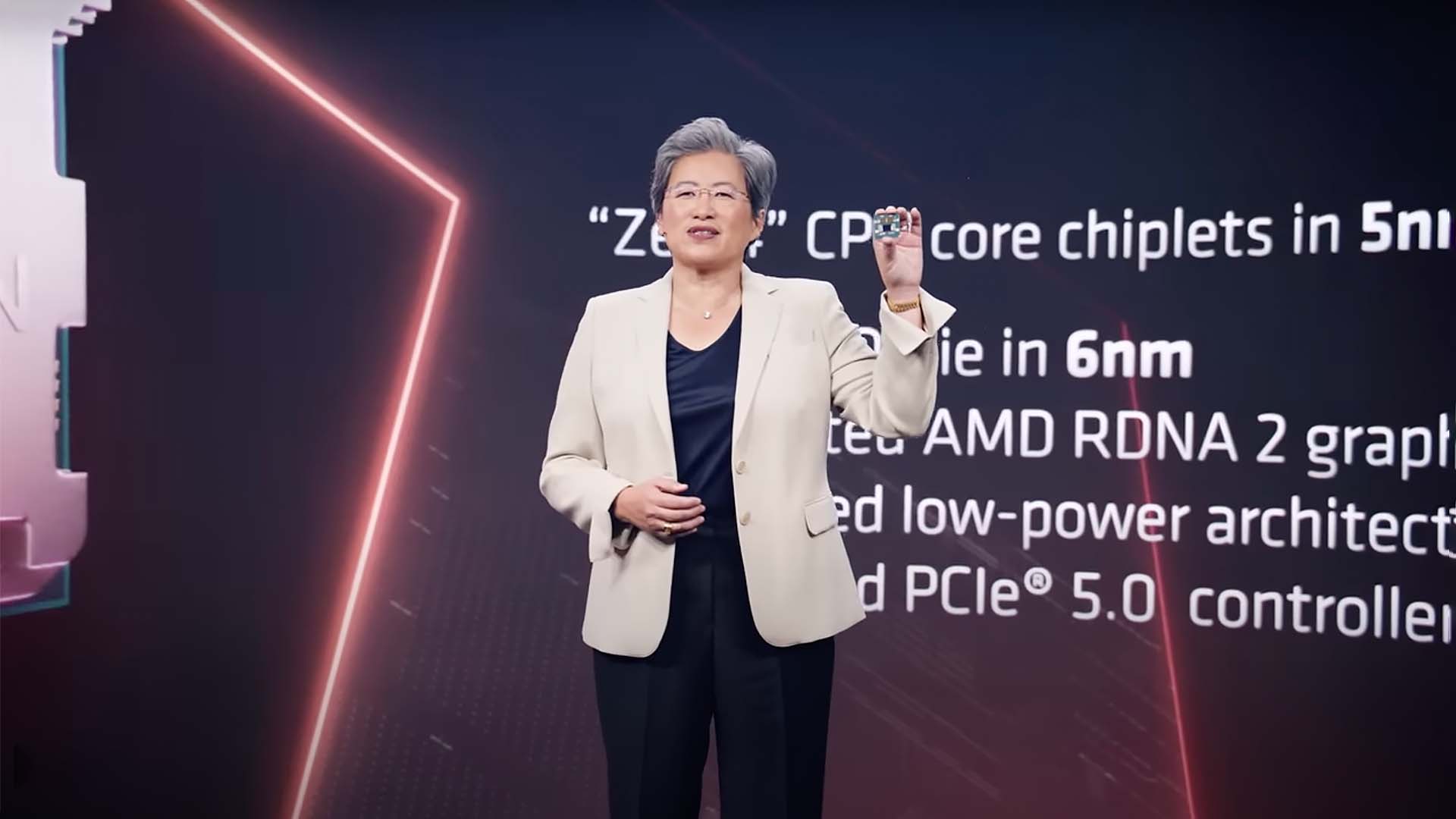 Another year, another Computex. As usual, companies like Nvidia and AMD offered keynote presentations showing more about upcoming products.

Once again, AMD kicked off the conference with Lisa Hsu’s opening keynote, emphasizing personal computing, primarily the CPU side.

AMD has been an underdog to Intel for decades. Even when it finally achieved performance leadership over Intel with Zen2 AMD remained the budget alternative rather than the premium option.  With Zen3 and RDNA2 AMD has continued its rise, culminating thus far in acquiring Xilinx earlier this year.

After that recap, AMD introduced the AM5 platform. AMD has been using the AM4 platform for more than four years, and plans for AM5 to last at least as long. The new socket uses a land-grid array with 1718 pads (hence the name LGA1718) and adds support for a TDP (Thermal Design Power) of 170 watts, yet remains physically compatible with existing coolers.

For memory and I/O AM5 has up to 24 PCIe 5.0 lanes to the CPU, dual-channel DDR5 support, and up to 14 USB SuperSpeed 20Gbps ports. AMD is clearly thinking about bandwidth for the future. For budget friendly systems, there will a version using PCIe 4.0 for graphics instead of PCIe 5.0.

There are also updates for technologies like WiFi 6 and DisplayPort 2, along with a lot of optimizations for optimizing power consumption.

To better take advantage of PCIe 5.0, AMD partnered with Phison to develop PCIe 5.0 NVMe SSD host controllers, with the SSDs incorporating them coming from Crucial and Micron in time for the AM5 launch.

Next up AMD officially unveiled Zen4, AKA Ryzen 7000. It will be the first CPU made for the AM5 socket and the 5nm process that AMD and TSMC have been collaborating on. The new Zen4 cores have a revamped cache and CPU architecture and exceed 5GHz. AMD cited a more than 15% improvement in single threaded performance over Zen3.

In Lisa Hsu’s demo, the CPU cores were reaching clock speeds of 5.5 GHz. Whether that’s all cores or just a few remains unclear, but it’s still a big jump for AMD’s maximum clock speeds.

The performance uplift is significantly smaller than the leaks had implied, and which AMD has since confirmed is due to sandbagging: AMD doesn’t want to tip its hand too early, or set expectations higher than it can meet.

The launch lineup will include a maximum of 16 cores, initially for desktops but with 16 core mobiles coming as well. The new I/O die that AMD is using for Zen4, manufactured using TSMC’s 6nm process which is actually an optimized version of its 7nm process, will all include basic graphics hardware. Upcoming APU models however will team eight Zen4 cores with gaming grade RDNA2 graphics.

Though AMD has confirmed plans to continue the Threadripper line, it’s not clear whether there will be a consumer version as before, or a high end server/workstation variant only.

AMD isn't the underdog any more. Even though it's still a smaller company than Intel, now that it's acquired Xilinx and Pensando, it's now a premium brand.

Following the “I am AI” presentations  GTC and CES, Nvidia's keynote emphasized AI quite heavily. The market for AI computing is potentially as large as $150B, and cloud based game streaming another $100B. Due to the massive power consumption of modern data centers, power efficiency is a very big deal and naturally nVidia touts the potential for saving power by moving from CPUs to GPUs for datacenter computing needs.

Meanwhile, Nvidia introduced the new CPU called Grace based on an ARM architecture. It’s available in two flavors, one called the Grace Superchip and one called Grace Hopper. The Grade Superchip has two Grace CPUs for a total of 144 cores, 1 TB of LPDDR5X memory, and a 500 watt power draw. Grace Hopper has a GPU in place of the second Grace CPU. Both models include NV Link for cache coherent connectivity with other processors from nVidia as well as from partners implementing NV Link connections.

Nvidia then described its new Bluefield-3 NPUs – network processing units. These are designed to provide high performance network connectivity for datacenters and for supercomputing.

Of course hardware needs software, so nVidia also showed some of the software it’s working on, like its Isaac robotics platform, which integrates with Omniverse. nVidia is working to make its Omniverse Digital Twins more and more realistic, closing the gap between simulation and application. Also on the robotics front, the dev kits for the Jetson Orin as well as production systems using it are now available, and several nVidia partners unveiled them at Computex. Later this year nVidia will start shipping reference implementations of the Nova Orin, which doubles up the Jetson Orin computer and teams it with a suite of sensors including LIDAR, ultrasonic, and optical for fully autonomous robots.

While the only way that most gamers will ever interact with Grace and Grace Hopper are through cloud gaming services and platforms like Omniverse, Nvidia did present some of its upcoming consumer gaming technology as well.

Reducing latency for cloud gaming is a big deal, so Nvidia spent a fair bit of time demonstrating its Reflex technology dedicated to reducing latency before getting to the hardware.

The Nvidia Studio ecosystem continues to expand and mature, and Omniverse is as well. New features include Audio2Face and Omniverse Cloud, emphasizing virtual production and machinima.

Having no horse in the personal computing CPU race, the competition from both AMD and Intel will put Nvidia in an interesting situation, and it's unclear what Nvidia's plan is to address that. The growing Omniverse ecosystem is probably part of that strategy.

The Computex presentations so  are hint at some exciting times for technology enthusiasts, as the CPU and GPU wars are both heating up to a degree never seen before, and this time with AMD participating as a premium brand rather than a budget brand.