Minority Report for real: HoloLens 2 is AR on an industrial scale 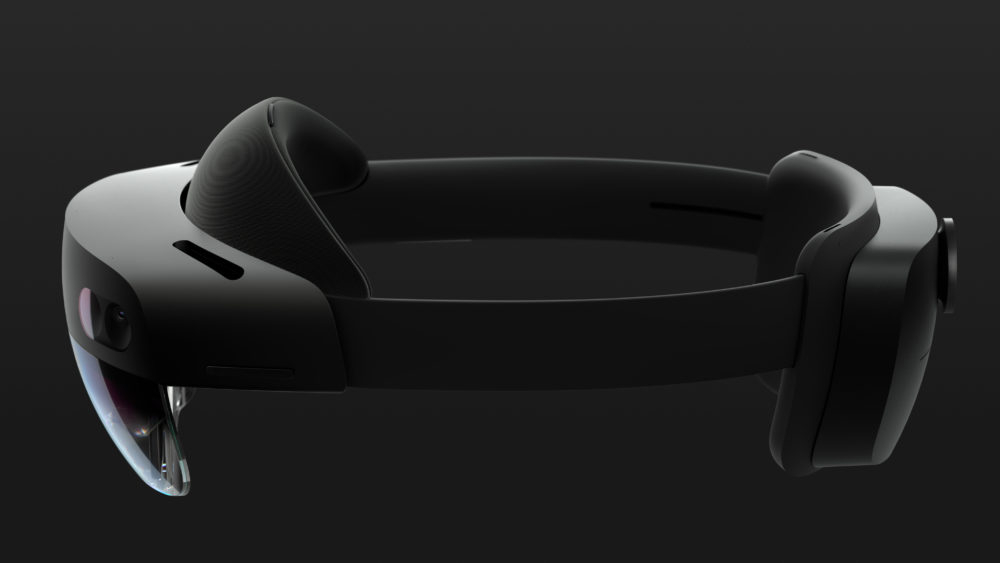 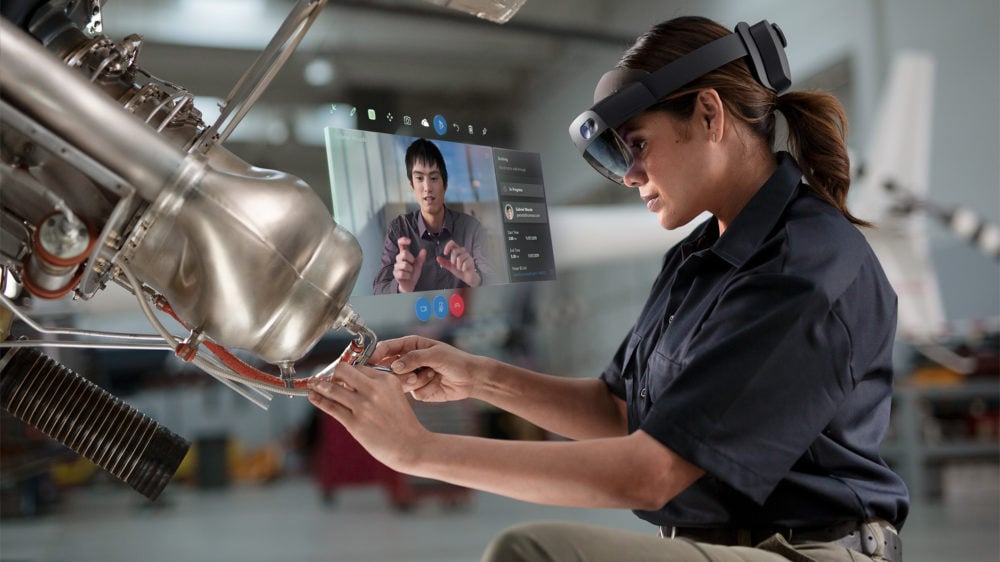 Microsoft has unveiled HoloLens 2, an upgraded version of the mixed-reality headgear and the nearest thing yet to being able to interact Minority Report style with the dimensional internet. But this is not aimed at gamers, visual entertainment, office workers or casual punters. This is a hardcore piece of computing for industry which takes AR very seriously indeed.

Microsoft CEO Satya Nadella said at the launch event in Barcelona that it was targeting use by large corporations in manufacturing, design, training and even warfare. Actually he didn’t mention war or that the firm has already drawn the ire of some of its own employees by selling an arsenal of HoloLens 2 kit to the US military.

Like Google, Facebook and noisy start-up Magic Leap, Microsoft thinks of AR as the next level of computing, one that frees us from being tethered to hardware and that opens up a spatial dimension to interfacing with the matrix.

“This new medium is just the beginning of experiencing what's possible when you connect the digital world to the physical world to transform how we work, learn and play," Nadella said. 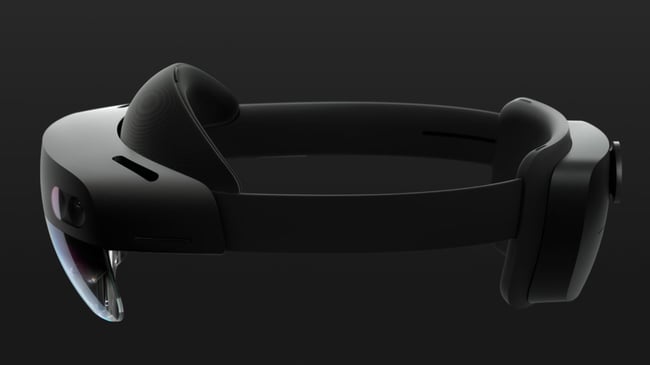 So, let’s run down the key advances.

More comfortable: Had to be really didn’t it? Each iteration will get lighter, and more discrete. Although, a few ounces lighter the principal reason for an allegedly more comfortable experience (Microsoft said it is three times more comfortable) is that some of the system’s weight has been shifted to the back of the head. Unlike Magic Leap One, the H2 doesn’t need its processing to be worn in a belt pack, so it’s still more bulky than its nearest rival, but the ergonomics of the new design are winning some plaudits even if it has been likened to wearing a welder’s helmet. Maybe that’s the point?

Flip-up visor: Like a welder’s helmet you can make eye contact with a real human and then flip the glass down again for more virtual/reality fusion. 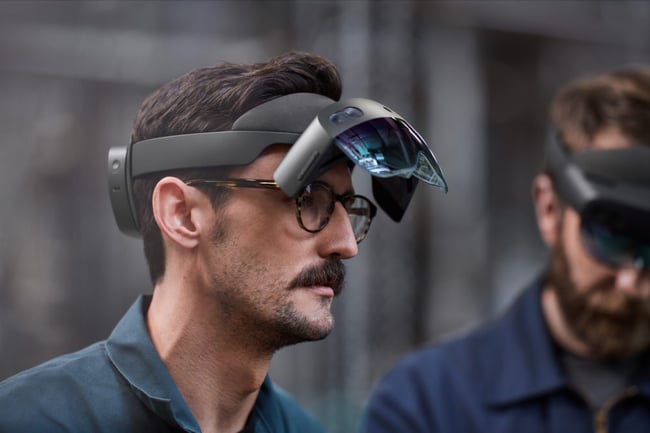 Double the field of view: The original HoloLens had a 34-degree diagonal FOV; the new version has been upped to a 52-degree diagonal FOV. In addition, resolution has leapt from 720p to the equivalent of 2K per eye. It has a Qualcomm Snapdragon 850 processor an on-board custom AI holographic co-processor.

Connects to Azure: Microsoft has never been a hardware company and it isn’t about to change now. HoloLens 2 is built to be a cloud connected device and not just into its own Azure cloud but via Azure to connect users of Android and Apple devices. It would mean a user could generate a hologram in one place and have it shared by users on multiple devices.

SDK for app developers: Microsoft is rolling out a number of Dynamics 365 branded apps for HoloLens. They include Dynamics 365 Product Visualize for showcasing products in 3D, Remote Assist for helping visualise product or system repair issues (as mundane or as practical as fixing a lift in a skyscraper) and a coming Dynamics 365 Guides application for 3D training at scale. Those that have tried this out liken the experience to a floating Lego manual for reality. Which sounds like it’s fun and easy and satisfying to me. Better than say a floating Ikea manual for reality. 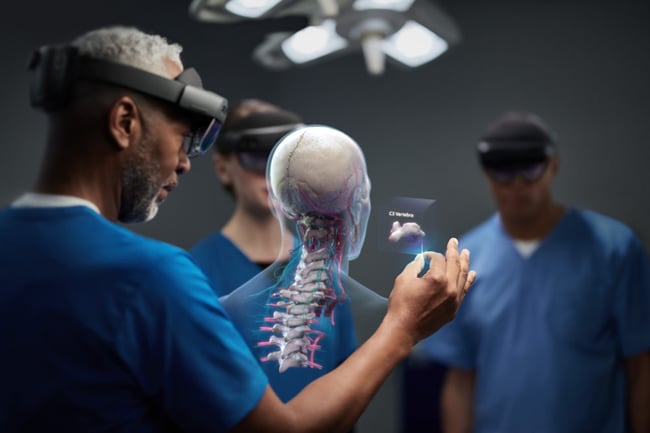 Retina tracking extraordinare: Here’s where it gets even more interesting. Internal cameras will track your eyes and recognise where you're looking so you don't even have to move your head at all. That’s not new of course, but Microsoft has given this the most full-bloodied representation yet. Eye tracking measures your eye movement and uses it to interact with virtual objects. For example, this means you can read a news story on a holographic browser, and the page will scroll for you. There are incredible uses here for communication by the physically disabled when all you need to pick, point and alter objects are your eyes.

HoloLens 2 will also track your hands without any additional controllers. It means you can walk up to a virtual object in HoloLens 2 and manipulate it (push, hit, squash it) with your hands. Microsoft calls it articulated hand gestures which means you can pick up a hologram and move it in space. You can imagine all sorts of ways of interacting with virtual objects including text, photographs and video with this alliance of eye movement and physical gesture. It may eventually become as second nature as scrolling with a mouse or typing on a keyboard.

Eye-tracking is also used for biometric security, too. The HoloLens 2 has iris scanning via Windows Hello, so users can instantly log in to Windows and launch their personal account or remember personal headset preferences.

Brain-wave tracking: Microsoft’s AR chief Alex Kipman said the HoloLens 2's eye-tracking cameras could also measure your emotions via tiny eye changes. CNET reports that at Microsoft's Human Factors Lab in Redmond Virginia, they are testing an EEG-sensing headpiece to measure brainwave activity. "We didn't necessarily use this much on HoloLens, but we see this as an opportunity ... we're using it on some other things,” says the Microsoft spokesperson cryptically.

Shipping: Second half of this year.

Costs $3,500: A pricetag which reflects its target industrial market. Microsoft is also offering HoloLens 2 as a bundle for three years along with a subscription to its Dynamics 365 packages. Companies like Airbus, Bosch, Honeywell and Saab are already test partners for HoloLens 2 and may value the ability to speed product design or diagnose problems on an oil rig or production line with holographic imagery and save the cost of physically sending technicians. Magic Leap One goggles aren’t much cheaper at U$2,295 – but they are cheaper.