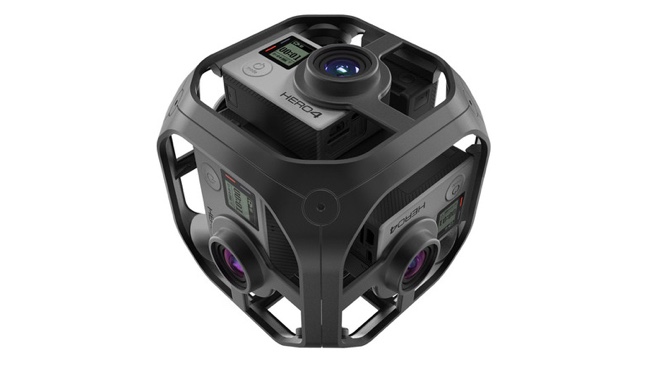 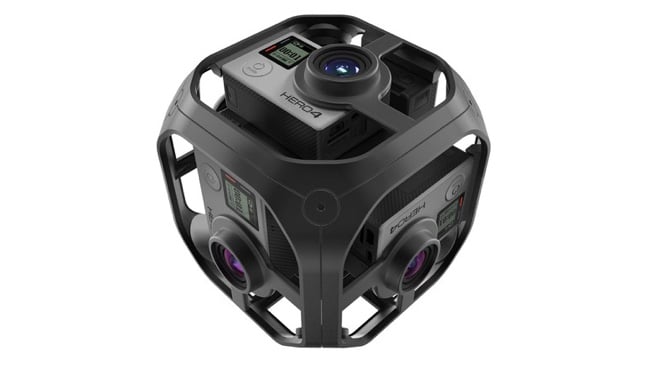 Seeing in all directions: The $4999 Omni rig

As predicted, VR has been at the forefront of many discussions at NAB. While YouTube’s introduction of live-streaming 360º video has generated many headlines, on the capture front GoPro is leading the way with its new Omni rig.

The GoPro Omni is not the only VR rig from this year’s NAB — we hope to cover some of the others, including one developed specifically for Blackmagic cameras, later in the week — but being GoPro it is the one making the most noise.

Essentially it’s a cube mounting six Hero Blacks in a synchronised array to provide full 360º coverage. The company claims pixel level synchronisation for the unit using proprietary software and that all six cameras act as one (the user interacting with a designated primary unit to configure settings and initiate start/stop). Stitching is via Kolor’s AutoPano.

As is the way with spherical content, a certain amount of attention has also had to be paid to the workflow and working with the resulting images. Users therefore have a choice and can remain in just the sort of almost complete GoPro ecosystem that will be familiar to long-standing action cam devotees: using an Omni Importer for preview, data management and rendering; Autopano for tweaking; the GoPro VR player for proofing; and finally publishing on the GoPro VR website. Or they can follow a slightly more high-powered route that has seen the company collaborate with Adobe to enable native handling of 360-degree video up to 8K resolution within Adobe Premiere Pro CC, and Adobe After Effects CC.

Indeed, the company also states that Omni may also be used to over capture at 8K and extract an HD deliverable, which is something we’d quite like to see.

There are two flavours available: an all-inclusive package that should be able to operate straight out of the box and even includes six 32GB microSD Cards and card readers, or a standalone rig. Prices are $4999 and $1499 respectively, with UK orders taking a rather large hit on exchange rates and currently listed at £4199 and £1299

Pre-orders are open now and the GoPro website is currently listing ship date as 17 August.