Send in the Drones 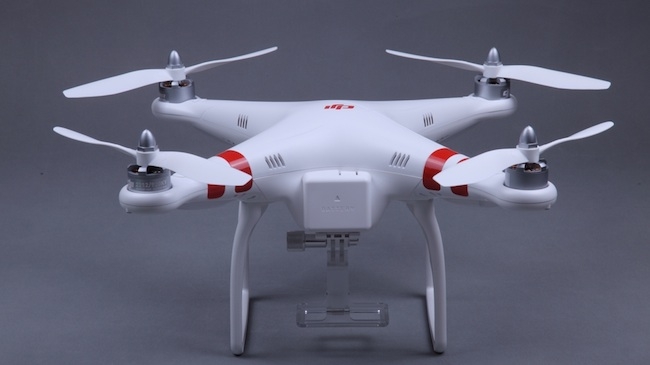 We have become a bit addicted to UAV or drone flying videos here of late, partly because they produce some astonishing images and partly because the skill of the pilots involved is occasionally phenomenal. The good news is that it’s a field rapidly taking off (ahem) and prices are tumbling, all of which makes it easy to get involved yourself.

Of course it’s the ubiquity of the GoPro camera that has brought the Unmanned Aerial Vehicle out of the realm of the military and into the range of not just the broadcaster but the hobbyist as well. Now, for somewhere under £1000 – and that covers camera and vehicle – you too can start flying your own semi-pro rig.

DJI’s Phantom Quad probably represents the low end of the market at the moment. It flies right out of the box, meaning that all you have to do is attach the four propellors, charge the LiPo and install the transmitter batteries before use. Control distance is roughly 300m (it operates in the 2.4Ghz ISM band) max speed is 10m/s horizontal and 6m/s vertical, and a fully charged unit will give you somewhere between 10 to 15 minutes of flight time. It also features a host of flight aides to help the novice pilot, probably the most useful being a Return to Home function aided and abetted by its inbuilt GPS which triggers when it flies out of control range.

If you want to step things up a notch, the company also does a hexa-rotor platform which can carry loads up to 2.5kg and adds another £1000 to the price. As is usual with a rapidly developing market, there are a serious amount of different systems available now in this mid-price range with four, six or eight rotor blade configurations. Equally they are capable of carrying a variety of different weights for a variety of different durations. Still, at least the research process if you’re looking to buy one should be fun.

After that, things ramp up a bit. If you really want to invest in improving your aerial images stabilisation is key. Of course, this can be done in post with varying degrees of success depending on the quality of the original images and how much grunt you can throw at the problem. Or you can invest in a gimbal whose inbuilt server motors react quickly enough to damp down any image vibration. This is a particular problem for live TV, and the reason why so many sports events use blimps as they provide a stable, if immovable, image platform, Gimbal prices start at around £2000 for a model lightweight enough for aerial work and head rapidly north from there very quickly.

Of course, at the hobbyist end of the spectrum you can’t typically lift enough weight to be looking at live video (though Parrot’s tablet and smartphone controlled A.R.Drone will stream live video via its internal 720P camera with a few hacks over the Wi-Fi hotspot it generates for itself for control purposes – look to pay about £250). For that you need something like Freefly Systems’ CineStar 8, an octocopter that will set you back somewhere in the vicinity of £6000 – more with gimbals etc - but has a payload capacity of 2.3kg, which is big enough to mount a camera such as a RED Epic or all the various electronics you’d need to be beaming back a live signal over RF.

In fact, there is a sometimes happy/sometimes incandescent subgroup of fliers online busy explaining and investigating different tweaks, hacks and modifications so that they can pull enough juice out of various vehicle’s batteries to power more onboard kit for longer without melting things or crashing. The whole scene really has a fecund Maker/Hacker vibe going.

Above that, things start to get seriously expensive. Flying-Cam’s SARAH 3.0 is a single rotor electric machine that filmed the opening bike chase over the roofs of Istanbul’s Grand Bazar for ‘Skyfall’ with an Epic and can take a maximum payload of 8kg up into the atmosphere. The company has also developed a Pilot in Relay system, which allows a second pilot to take over operation of the craft if it moves out of its 400m flight control envelope. Cost for that? Considering that the only things that take to the air between it and the full-sized, manned helicopters with the £200k FLIR gimbals are military UAVs capable of doing rather more (and sometimes rather more lethally) probably more than most people will want to spend.

But, for the real advance that we would like to see, check out this BBC story about the University of Minnesota's Institute for Engineering in Medicine department harnessing the power of thought to guide a remote-control helicopter through an obstacle course.