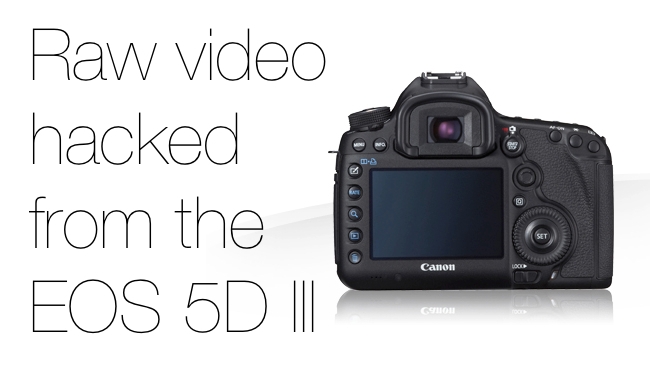 The 5D mk III has been hacked to output raw video. It's not all plain sailing, though!

For those not familiar with Magic Lantern, it’s a non-destructive firmware replacement that sits alongside the existing camera firmware on the Canon EOS series of DSLR’s such as the Canon 5D and adds a number of extra features to the camera including much improved support for audio recording.

Now the people behind the Magic Lantern hack have had a big breakthrough. It appears they have worked out how to extract 14bit RAW DNG video from the cameras!

So far they are managing to write about 15 seconds of 720p RAW video @ 24fps (without audio) to fast compact flash cards. Not much you may think, but it could be enough for some styles of music video or commercials.

The problem with RAW

It’s possible they can take the discovery further over time but they face some nasty technological hurdles. The problem with RAW is that the file sizes are really quite large, this means there’s a lot of data, and getting that data onto a compact flash card, let alone an SD card, is difficult when you are having to do it in real time. You face the problem that the data may be arriving faster than it’s possible to write it to the card. The answer to this of course might be some kind of compression. In theory that’s great, and there is even a standard for compressed cinema DNG (the one that Blackmagic are hoping to use for their Pocket Cinema Camera) but they then face the issue of whether the processor will be able to handle the load of doing all that compression in realtime. I think this can be done, but it’s probably going to take a fair bit of work as some poor soul has to write the compression code and whether it will ever be possible to write out 1080p at 24fps remains to be seen.

Cropping may be the answer

Far easier in the short term might be to crop the RAW data before writing it to the card. If the data is cropped to a 2.40:1 cinema-scope style aspect ratio for example, that will be a lot less data to write to the card. I guess there’s also the possibility of cropping to 1.85:1 too, but whether that would be a significant enough reduction in data to be worthwhile might be an issue.

Lower frame rates will be far easier of course.

One last possibility might be to find some kind of way of outputting the data through the HDMI port, but there is no standard for RAW data over HDMI so you have the question of what you are going to output the data to. (What are you talking to at the other end of the HDMI cable?) In addition there is unlikely to be existing code to write raw data to the HDMI port so it’s probable the developers would have to come up with a custom solution.

All the same, despite the 15 second limitations, this hack is presently capable of, this is a really nice addition to the toolbox of Canon users. Those who are experimenting with it are already saying they can see more detail coming out of their 720p RAW files, than they get when they record 1080p in .h264 on the camera normally and of course they have the additional benefit of having a huge amount of flexibility in terms of colour correction when recording in RAW too.