All the RED stuff at NAB that didn't make the headlines 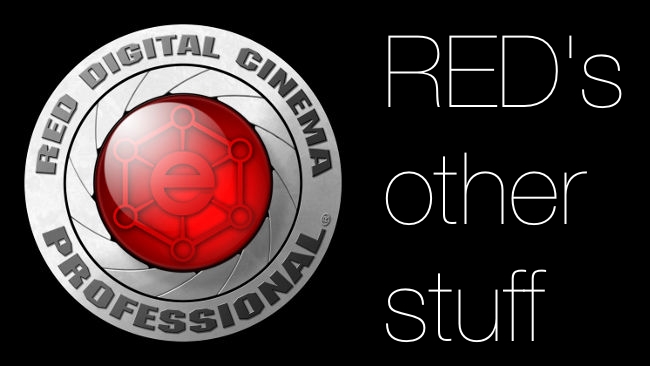 With REDs Dragon sensor grabbing most of the headlines, there was some very interesting tech launched by RED at NAB that you might have missed. Heres a roundup

Well RED have been very busy indeed! Not only with developing the new RED Dragon sensor but also buying Element Technica (to be called RED Element in the future) - and finally with making lots of new accessories for their cameras.

The two most significant releases are probably the new Red Rocket-X and The Red Motion Mount. The Red Rocket-X is a slot-in card for your computer (PCI-Express) which is capable of processing .R3D files from Scarlet, Epic MX and Epic Dragon cameras up to 5x faster than the current Red Rocket! Great for fast transcoding to 1080p. The price is $6750 but if ordered at the same time as a new DRAGON camera or when upgrading the Epic then the price is discounted to $4495. It’s Shipping this Summer 2013 and works with both Mac and Windows based computers.

The Red Motion Mount is an unusual product that’s a bit hard to explain but is basically a replacement lens mount that provides a global shutter and built in 8x electronic N.D. filtering to existing cameras. It’s claimed it “Eliminates Shutter Judder and defeats aliasing”. Initially it will be available as a PL mount but down the line a canon mount version is also expected. The price is due to be $4500 and it will be shipping in the Fall (Autumn). This is actually a pretty groundbreaking device and we’ll have an article from Adam Wilt specifically about it soon in RedShark.

The new Red fans I wrote about before will be available at the end of May. The DSMC FAN 2.0 Upgrade Kit provides you with user replaceable top and bottom fan systems to provide a quieter more robust cooling system for your Scarlet, Epic or Dragon camera. It’s $450 for a kit (both fans) or $250 each fan.

A new red lens motor is one of the first products combining the talents of both RED and Element Technica. It’s shipping in the summer and basically provides electronic lens control. Given that it fits onto a standard 19mm rail, I don’t see it should be a problem to use it with cameras and lenses outside of the Red stable too! The price of each motor is $1250. Here are some specs:

- Compatible with the Meizler Module as well as most lens control systems, the RED LENS MOTOR combines a small package with higher torque than the small Heden.  - 270 Degree rotating connector allows for much easier configuration and mounting.  - Fits onto a standard 19mm rail (15mm with insert)  - Friction or Geared Interchangeable Gear heads ( left or right )