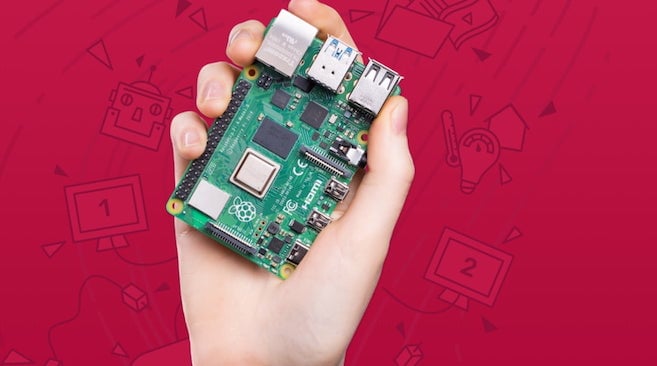 Actually, while it is an easy label, calling the Raspberry Pi Foundation’s diminutive box of computing tricks a hobbyist computer is not being entirely fair to it. It is eminently hackable, gloriously extensible, and can be found in a growing number of niches throughout the industry driving motion control rigs, powering IP cameras, and more.

The credit card-sized Raspberry Pi 4, which launched on 24 June, is an impressive three times faster than the previous model. In fact the Foundation estimates that the new Broadcom BCM2711 base chip featuring four 64-bit Armv8 Cortex-A72 CPU cores clocked at 1.5GHz, is comparable to an entry-level x86-based system. Not bad considering it starts at $35.

The hardware is happy to drive H.265 encoding which is handy given the presence of two 4Kp60 outputs. The slight wrinkle in this perhaps is that that is all via two type D micro HDMI connectors rather than the type A mounted on the v3 unit. Including two of those in the new model would have made the card two tall, says the Foundation. But all the same, being able to drive two 4K monitors out of it is going to see it make fairly decent headway in areas like digital signage.

Joining the historic 1GB version are new 2GB and 4GB models (the latter bumping the price up to $55), providing additional headroom which ought to make Linux work a bit more smoothly amongst other benefits. Connectivity is managed by Bluetooth 5 and a couple of USB 3 ports. Connection tends to cost — this is a bare bones machines and any cables etc need to be bought separately, though it has to be said prices are in line with the Pi itself and tend to be on the low side. You might also want to think about cooling.

And, in terms of the longer term investment, the Foundation’s roadmap says that the Pi 4 will be in production though till at least January 2026.