Last year's phones, from all manufacturers, were viewed as being blazingly fast. The latest iPhone is a clear show of just how fast these devices are now becoming.

I am of course bracing myself for the inevitable barrage of comments about how RedShark is the Apple Fanboy centre of the universe. But the fact remains that in a recent benchmarking test on Tom's Hardware, the new iPhone XS and XS Max didn't just beat out the competition, they beat it out by some considerable margin.

The other manufactuers will doubtless respond with their own upgrades to current models, and so the cycle will begin again (and hence proof that we are not blinkered fanboys, but fully acceptant of the fluidity of the market and the technology that drives it). However right now, if you want the fastest phone, it would seem that the iPhone XS series is the one to go for. 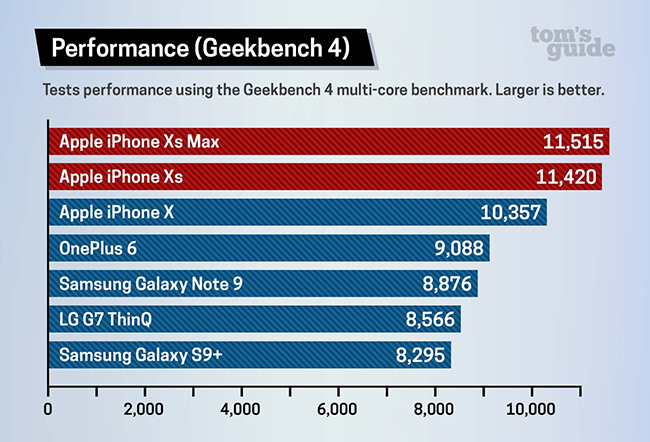 The fact that not only is the main 6-core A12 chip so much faster than last years model, but the GPU is as well, demonstrates that far from being a small iterative update of the original X, this is quite a step forward. An illustration of this is the video transcoding test, which took a 2-minute 4K video and transcoded it to 1080p. The iPhone XS took 39 seconds, compared to 2:32 on the nearest competition.

Now before you all jump onto your horses from on high and start telling us about how Apple phones are overpriced and therefore the born evil, and that Apple owners are sheeple, consider the much bigger, and important picture here. Back in 2017 the iPhone 8 and iPhone X with the A11 chip were found to be more powerful than the 13-inch MacBook. Now with such a significant increase in performance the latest iPhones are now even more powerful processing wise than Apple's base MacBook model. Think about that for a moment. A device that is mm thick and a few inches in width and length is as powerful as a good laptop.

When commentators complain about lack of innovation or over pricing, it is a good thing to take stock of what these devices are capable of doing. And by that I mean across the board of different manufacturers. $1000 seems like a huge price to pay. But it isn't if you think about what the device actually does and what it is now capable of. This is a device with computing power that absolutely trounces some super computers from the past that took up a whole room, and yet it fits into your pocket, and it can be used and operated by anyone. Perspective is a good thing to have when discussing the merits or otherwise of current technology. I grew up with computers (albeit beginning with the ZX80, then the Acorn Electron through to the Atari ST and then PCs onwards), and yet I still sometimes have to proverbially kick myself that the technology we see now actually exists and is real. Even sci-fi writers of the past, whilst getting some wider predictions right, struggled to suggest that devices of the power we see now would be available in such slimline, small and convenient packages.

It is obvious that Apple's laptop range will increase in speed as well as time goes on, but what will be interesting is the path that Apple takes with this. The writing has been on the wall for a long time as to whether the company will move away from Intel chips in its desktop and laptop computer range, with some rumours saying that it is planning to make the move by 2020. There are hurdles involved in doing this, but Apple has been here before, and the latest A12 points to such advances being made that we could well be looking at the tipping point.

Meanwhile, I am still waiting for my phone to project a keyboard out next to it while wirelessly sending an OS desktop over to a foldable display that I can put into my pocket...