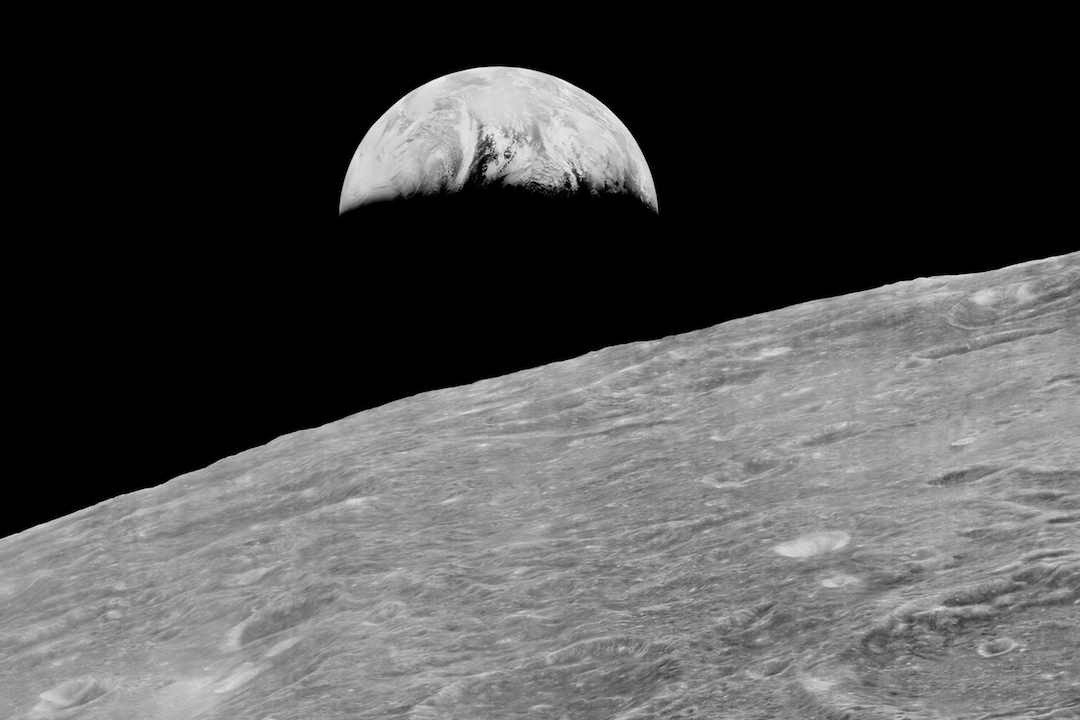 The first picture of Eathrise, taken from Lunar Orbiter 1 in 1966

The pictures that we’re used to seeing from the NASA Lunar Orbiter missions in the 1960s were nowhere near as grainy and low-res in real life as we were led to believe.

We’re familiar in this day and age with the way satellite images of Earth available to the public don’t have quite the resolution that the spooks get to use — US law, for example, limits the resolution that can be sold to the public to 30cm per pixel, where it is likely government agencies can access images closer to 7cm per pixel and above. But it turns out this game has been played for a long time. In the 1960s, a succession of Lunar Orbiter vehicles took photographs of the Moon’s surface in order for NASA scientists to assess decent spots for a planned landing. Captured on 70mm film, the pin-sharp images were then stitched together into giant mosaics that NASA pored over in immense detail. However the public never got to see anything like them.

On RedShark we’ve covered before how the video imagery of the Moon landings that we are used to seeing was nowhere near the quality of what was actually captured and the original tapes were wiped. If you subscribe to the cock-up view of the world, that was a pretty perfect example of the genre. However, the Lunar Orbiter images neatly support the opposing conspiracy view, as the ones made available to the public were blurred and made increasingly grainy in a deliberate attempt to disguise the capabilities of the US’ spy satellite cameras which had fed into the Orbiter design process.

This was the height of the Cold War after all, and the US government did not want the Russians to know how good their satellite imaging capabilities were. Nor, indeed, search through the Orbiter photos to find a landing site for their still very much active Moon landing program.

The Orbiters were essentially the greatest analogue photo booths ever invented. The 70mm film was developed internally in space and then raster scanned with a 5 micron spot, giving 200 lines per mm resolution, before being losslessly beamed back to the three ground stations. They were then recorded to magnetic tape using refrigerator-sized Ampex FR-900 drives.

Unlike the debacle with the Moon landing tapes, these ones were kept safe, which meant that a restoration team could attempt to pull images off them in an abandoned McDonalds building (rather wonderfully dubbed McMoon). Over the course of seven years from 2007, the Lunar Orbiter Image Recovery Project brought back 2000 images from 1500 analog tapes, including the first ever picture of an Earthrise at the top of this piece.

As co-lead and founding member at LOIRP, Keith Cowing, put it to Wired in 2014, that was “an image taken a quarter of a fucking million miles away in 1966. The Beatles were warming up to play Shea Stadium at the moment it was being taken.”

The actual LOIRP website has been mothballed for a few years now since the final photos were handed over to NASA in 2014. But you can access the resulting gallery of images, some of which are impressively large, here.