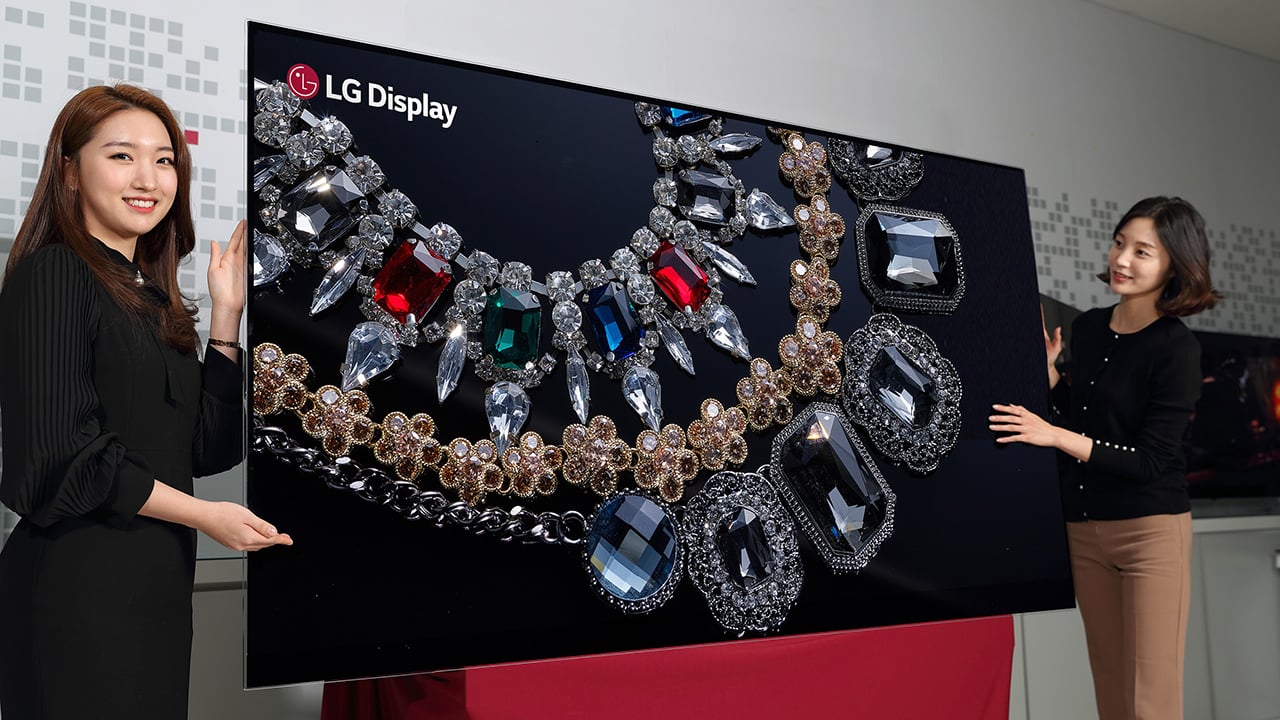 8K is gaining a lot of momentum

LG gives us a glimpse of 8K television with a staggering new 88-inch OLED display.

It is currently the largest OLED display that has been produced, but the fact that LG’s new TV screen is 8K shows clearly the direction in which manufacturers are heading. We can debate it, we can argue over it, we can poo-poo it, but 8K is coming to the mass market, and probably far sooner than anyone had anticipated.

The new 88-inch display is of course currently just for demonstration of the technology, but it is anticipated that it will make it’s way into a television that you can buy very soon. Albeit most likely at a price that contains five figures. No matter, if we look at how quickly the price of 4K screens came down, we are likely to see the same trend with 8K screens, like it or lump it.

LG’s rival, Samsung, has also recently demonstrated it’s own 88-inch display, costing £20,000 using its own QLED technology. Although Samsung claim that the display can show 100% of the DCI-P3 colour gamut, it still requires a backlight meaning that it is not capable of the deep blacks of competing OLED screens.

LG's new screen will be available for viewing at CES, which kicks off next week.

While the drive for 8K is confusing to some, it is extremely important for applications such as 360 video and VR, certainly at the acquisition stage. 2018 has just got off to an interesting beginning. Official press release follows on the next page.

SEOUL, Korea (Jan. 1, 2018) – LG Display, the world’s leading innovator of display technologies, announced today that it has developed the world’s first 88-inch 8K OLED display. This industry-leading product will be showcased at LG Display’s booth at CES 2018 in Las Vegas this month.

The newly-unveiled largest OLED display in the world boasts the highest resolution with 33 million pixels (7680×4320) – 16 times more than FHD (1920×1080) and four times more than UHD (3840×2160). This expansion of its OLED product portfolio reflects LG Display’s commitment to lead the high-end premium TV market.

“The successful development of the world’s first 8K OLED display is a milestone for the 8K era and underscores the exciting potential of OLED,” said In-Byung Kang, Executive Vice President and Chief Technology Officer at LG Display. “OLED is clearly a next-generation technology leader and for this reason, LG Display is accelerating its research and development into OLED so that we can provide differentiated products to customers and markets.”

The 8K OLED displays can also maintain their slimmer design, as the self-emissive OLEDs do not need backlight units. LCDs with 8K resolution, however, inevitably get heavier and thicker because backlight units need to be placed directly behind the panels to achieve the same level of brightness and picture quality as 4K products.

As LG Display, the sole large-size OLED display maker in the world, uses its in-house innovations in panel design and fine processing to create 8K resolution OLED displays, the company is set to lead the extra-large and ultra-high resolution panel market.

In fact, DisplayMate, a professional, US-based display-testing and rating body, praised OLED TVs in a recent report as visually indistinguishable from perfect with the highest absolute color accuracy, the highest absolute luminance accuracy, and the highest contrast ratio. In addition, OLED TVs have consistently won top rankings in quality and performance evaluations conducted in North America, Europe and elsewhere.

This cutting-edge display and many other products can be experienced at LG Display’s booth (#N 228) in the North Hall Meeting Room of the Las Vegas Convention Center during CES 2018.