How many cameras should you take to Mars? 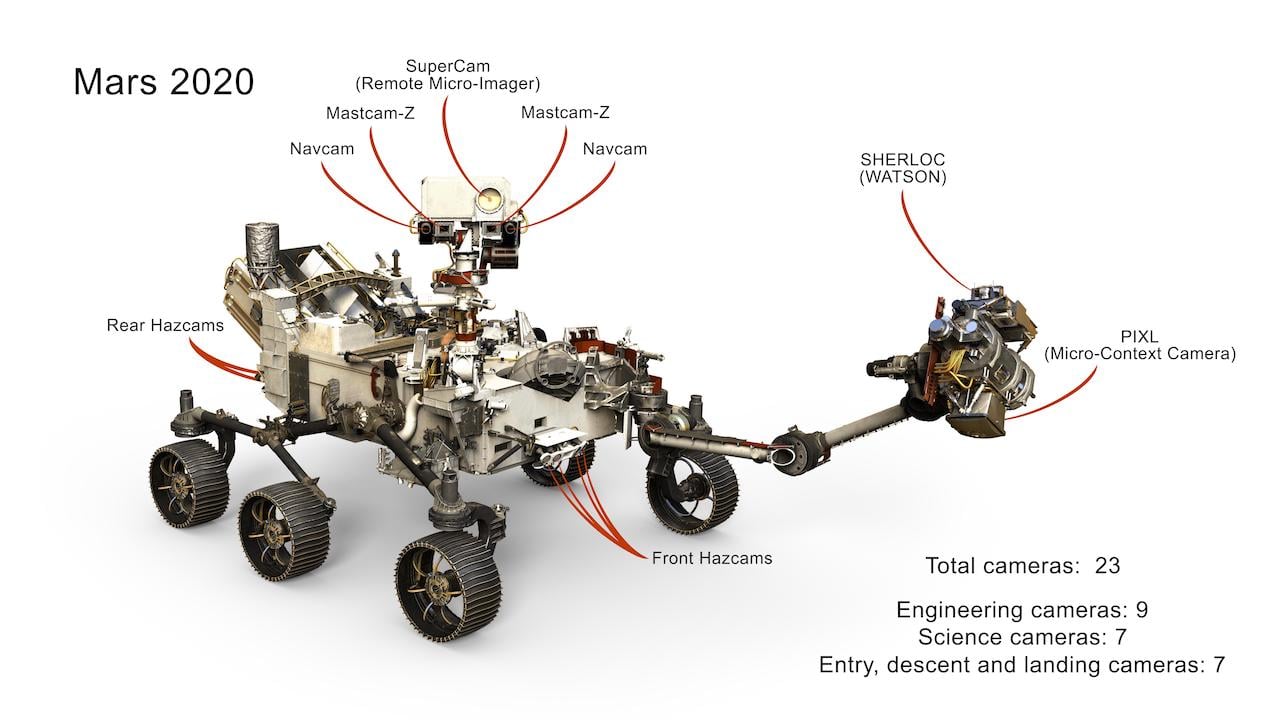 In 2020 NASA is planning to send the aptly-named Curiosity 2020 probe to Mars. In 1997, its Pathfinder probe had five cameras on it: this one will have a grand total of 23.

From two in 1976 on the Viking Landers to five in 1997 (two on a pop up mast, three on the Sojourner rover) and now 23, Curiosity 2020 will be the most camera-laden object ever sent to the Red Planet.

In fact, there are so many cameras on the probe that it’s worth splitting them into categories to list them all.

And if that seems like a lot it’s because not only is there a lot of engineering data that can be captured from this stage of the mission but NASA also acknowledges the importance of carrying what it calls ‘public engagement payload’. Given its plan to use existing satellites in orbit round Mars as relays, we ought to get to see these pictures fairly swiftly too.

The engineering cameras have all been upgraded from 1MP in the previous rover to 20MP. Six HazCams detect nearby hazards and also allow the engineers to move the robotic arm accurately, while two sets of colour stereo NavCams mounted up on the rover’s mast can detect a golfball from 25 metres and help engineers navigate Mars 2020 safely, particularly when the rover operates autonomously.

A CacheCam has been designed to take pictures of samples inside the rover before the tube is sealed on the material for possible future return to Earth (details on this are still being worked out, but it would involved a new mission and 2026 is looking like the earliest possible date).

Then we get to the five specialist scientific cameras.

SHERLOC's main tools are spectrometers and a laser, but it also uses a macro camera to take extreme close-ups of the areas that are studied. This provides context so that scientists can see textures that might help tell the story of the environment in which the rock formed.

The WATSON camera is one of the tools at the end of Curiosity's robotic arm and provides views of the fine-scale textures and structures in Martian rocks and the surface layer of rocky debris and dust.

MastCam-Z is a pair of cameras that takes color images and video, three-dimensional stereo images, and has a powerful zoom lens to see details of faraway targets. SuperCam fires a laser at mineral targets that are beyond the reach of the rover’s robotic arm (up to 7 meters away), and then analyzes the vaporized rock to reveal its elemental composition. And PIXL uses X-ray fluorescence to identify chemical elements in target spots as small as a grain of table salt and has a Micro-Context Camera to correlate its elemental composition maps with visible characteristics of the target area.

As the Twitter account of the current Curiosity Rover beavering away on the Martian surface put it, “I mayyy have a case of camera envy…”