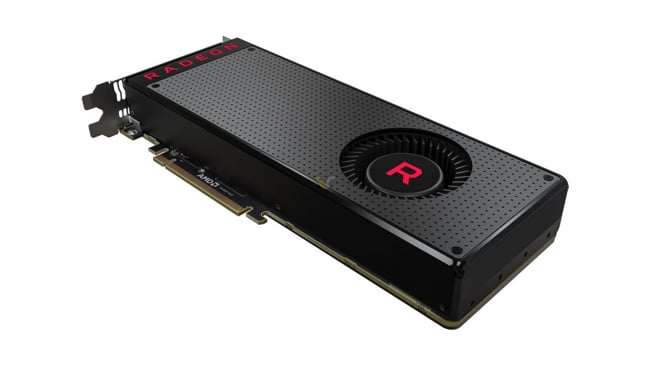 Another few hours and it will finally be here

AMD launched its Radeon RXVega graphics cards today after months of drip-feeding information about it that in the end answered the two big unknowns about the introduction of any new graphics card; how it will perform and how much it will cost.

[Ed's note: This piece was written by Leo Waldock before the official launch of the RXVega on 14th August. He was bang on the money about it all though so we've left it as it is.]

We don’t yet know about performance, although your correspondent made an educated guess many months ago that it would match Nvidia’s GTX1080 Founder’s Edition and that still seems the likely mark. The second point about pricing has now been answered by AMD, however, the situation is somewhat complicated so we’ll come to that momentarily.

Radeon RXVega is the first implementation of the Vega 10 GPU which uses a new architecture called GCN (Graphics Core Next) 5th Generation which seems like a subtle change from the current GCN 4th Gen used in Polaris GPUs which are sold as Radeon RX 580 and previously as RX 480.

The biggest change with RXVega is a move from HBM (High Bandwidth Memory) to HBM2 where most graphics cards use GDDR5. The problem with the HBM used on Polaris is that you get either 4GB or 8GB of fast memory with a massively wide memory controller, hence the name HBM. High Memory Bandwidth is a good thing, but 4GB simply isn’t enough.

HBM2 allows higher density memory chips, but in the first instance Vega will ship with 8GB of HBM2 and the professional Radeon Pro WX 9100 will have 16GB, so we’re talking about more memory, but it’s still not very much memory.

Inside the GPU Vega uses the same fabrication process as Polaris. The surprising thing about Vega is that the core clock speed has been cranked up considerably from the 1300MHz found inside Polaris to the best part of 1700MHz in the fastest version of RXVega.

There are three versions of RXVega that sit above the existing Polaris GPUs in AMD’s product stack for the time being. That ‘for the time being’ implies AMD will bring out mini Vegas that will replace RX 580 and RX 570 in time. The basic Radeon RXVega56 has 56 Next Gen Compute Units (clusters of shaders) and 3,584 Stream Processors, while the more grown up Radeon RXVega64 is the full chip with 4,096 Stream Processors.

There is a third Vega which is a water-cooled version of the 64 that is called Radeon RXVega64 Liquid Cooled Edition. This card has a base speed of 1,406MHz, a hefty boost speed of 1,677MHz and a power draw that climbs to 345W. The liquid cooler on the Radeon FuryX was made by Cooler Master but for the Vega Liquid Cooled Edition, the cooler appears to made by Asetek.

Those power draw figures appear fairly high – about 50W higher than we would like to see, and perhaps 100W above the ideal – which suggests that AMD has overclocked Vega to raise the performance to an acceptable level. Having said that, provided Vega delivers the correct level of performance and costs the right amount we can probably forgive and forget.

And how much, you may wonder, do you have to pay for Radeon RXVega64 Liquid Cooled Edition? It seems the answer is $599, however you won’t be able to buy this graphics card as a straight purchase. Instead, you have to buy it as part of a Radeon Pack, which is the complicated part of the equation.

It’s a similar story with the Radeon RXVega64 where you will pay $599 for Radeon BlackPack, so you pay the extra $100 and get the same discounts on the same products.

If you want the high-end liquid-cooled GPU you will pay $699 for the Radeon AquaPack that provides the same discounts.

It seems that part of the thinking behind Radeon Packs is that AMD wants to keep their new Vega graphics cards out of the hands of crypto currency miners, but no doubt AMD is also keen to shift related products such as Ryzen 7 CPUs. When Vega has been launched we shall have to see whether or not the etailers will offer Vega for sale to everyone, and not only to those in the market for a Radeon Pack.

And of course, we shall see how well Radeon RXVega56 competes with GTX 1070 and whether or not Radeon RXVega64 can take on GTX 1080.