Better iOS photos with Halide: an app with pedigree 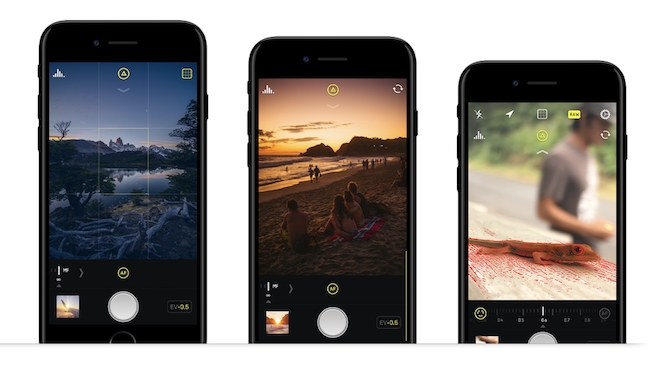 Halide: rethinking the iOS camera interface one gesture at a time...

Halide is a new iOS photography app with serious chops written by former Apple designer Sebastiaan de With and Twitter engineer Ben Sandofsky who previously worked on the iOS version of Twitter and the Periscope video processing stack.

Halide aims to rethink the user interface for photography applications to make them both easier to use but at the same time more powerful and professional in results. It has a gesture-based interface which aims to make controls and features which might normally be thought of as more advanced into something that anyone can wrap their head around easily. It also features a "Smart Auto Mode" that you can easily switch to quickly if you suddenly just want to take a quick snap in a hurry.

One of the more interesting user interface enhancements is a slide to focus function which allows you to bring objects into focus at varying distances as you slide your finger across the focus dial. If you have an iPhone 6 or above then there is also a focus peaking feature available with the in focus edges highlighted in red. This is available by just tapping a small button in the corner of the user interface.

Getting focus the way you want it seems to be something Halide has an emphasis on which is understandable as it can be such an important part of photography, both in the everyday manner of wanting to make the image clear to see and understand as well as the more creative uses of focus.

Halide has a fast live histogram to help get the exposure just right too.

Sliding your fingers up or down on the screen adjusts the shutter speed and there is also an option for changing the ISO. Sadly white balance is limited to just 4 presets, you can't slide to adjust the colour temperature in kelvin or anything like that. There is also an auto white balance feature.

The app supports shooting both ordinary jpg files and in RAW so if you really want to do a lot of post processing in Adobe Lightroom or something you have access to the extra data that raw files provide so you can push the image further. RAW support is only available on the iphone 6 and above however.

There is a grid overlay for helping with shot composition and there is a levelling indicator that works when you activate the grid as well.

You can review your photos with a Tinder-inspired interface where you swipe left to delete a photo and right to favourite it. Swiping up and down on the other hand allows you to move through the photos you have taken.

There is also an option to add your GPS location to the exif data.

Halide doesn't try to replace the stock iPhone camera interface but instead intends to compliment it. To that end Halide appears to try and limit the interface to what is important to get the job done so it doesn't feature a lot of additional and potentially confusing modes. One down side of this is that the app does not presently support shooting video. Perhaps that will come in the future or there will be a specific app designed especially for that from the Halide team, but for now Halide makes for a really interesting look at the direction user interface design for cameras might go in the future.

And you can take very nice photos with it too of course.