AMD’s Revolutionary Ryzen: Is this the chip to make you move from Intel?

One chip to rule them all, one chip to find them?

A lack of real competition in the CPU market recently has seen prices drift steadily upwards while the gloss has come off performance progress, all of which means that AMD's new Ryzen CPU has the potential to be a real game-changer and a proper challenge to Intel's hold on the desktop industry.

Back in January, I previewed the new AMD Ryzen chip, all of which was broadly correct. There has been one significant change as AMD has already announced the server Naples chips which suggests they are coming much earlier than we expected and, on paper, we expect Naples will give the latest Xeons a very tough time.

Ryzen 7 has 8 cores with 16 threads while Ryzen 5 has either 6 cores/12 threads or 4 cores/8 threads, depending on the model.

The CPU dies are fabricated on a 14nm FinFET process from Global Foundries and use Socket AM4. They have an integrated dual-channel DDR4 memory controller that is compatible with memory running at 1,866MHz-2,667MHz depending on the layout of the memory chips. In addition to the maximum Boost speed, the CPUs also support a mode called XFR (Extended Frequency Range) that is worth an extra 100MHz, depending on CPU temperature. You won’t be surprised to learn that XFR is the clock speed AMD usually quotes.

When Ryzen R7 1800X launched it received a great deal of favourable press and this continued over the following two weeks with R7 1700X and R7 1700. It is fair to say the tech world has been desperate to see Intel face some competition as the desktop PC world has stagnated while prices have steadily drifted upwards and, happily for AMD, the goodwill seemed to be entirely deserved.

The simple message about Ryzen R7 1800X is that it gives Intel Core i7 LGA2011-3 a damn good fight and is considerably cheaper. If you are currently considering an Intel X99 motherboard with Core i7-6900X you should seriously think about swapping to AMD X370 and Ryzen R7 1800X which will save you at least £500. The combination of core count and clock speed works in your favour and the fact that Intel can offer quad channel DDR4 memory support doesn’t really mean much for mere mortals outside the server room.

On the other hand, if you are a gamer who needs high clock speeds, the smart move is to pick Intel Z270/Z170 and Core i7-7700K or 6700K. The fact the Intel CPU ‘only’ has four cores really doesn’t matter at the moment. Many games rely heavily on a single core and make little use of the extra cores. This will certainly change over time as software becomes better suited to multi-threading, but right now gamers gain little or no advantage if they are packing six or eight cores under the hood. 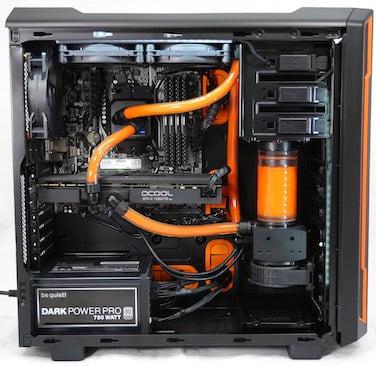 Unfortunately, there is another side to Ryzen that isn’t quite so pretty. I ordered a Ryzen R7 1700X for launch day, along with an Asus Prime X370-Pro motherboard, which came to about £550. On launch day I was contacted by the retailer who told me that X370 motherboards were unavailable and would I fancy buying a Micro-ATX Asus Prime B350M-A for a mere £80, which I did.

The next day my motherboard and CPU arrived and I assembled a PC with Alphacool liquid cooling (pictured up top). Mounting the water block on the CPU was tricky as something was clearly off with the new mounting kit. Alphacool told me they had been given incomplete dimensions for AM4 with the result that the CPU block wasn’t clamped correctly on the CPU. The same was true for other cooling companies including Asetek, which means that every liquid cooler on the market requires a revised mounting kit for AM4. Air coolers from the likes of Noctua use a crossbar mounting system that works just fine so anyone building an air cooled Ryzen won’t notice the problem.

Once my new Ryzen was running I hit a second problem as the CPU temperature was curiously high. It idled at 50 degrees C, went up to 60 degrees under mild load and sat at a steady 70 degrees under stress test load, which are the same figures I saw when reviewers first tested Ryzen. That made little sense as liquid cooling should reduce the temperature significantly. I also had science on my side as the temperature of my liquid cooled GTX 1080 graphics card was 15 degrees cooler than the CPU. The CPU and GPU were on the same cooling loop so this either suggested inaccurate numbers or some sort of problem with the cooling system.

The answer is that AMD has added a 20 degree offset to the temperature figures that are produced by 1800X and 1700X, so my CPU actually idled at 30 degrees and ran at 50 degrees under extreme load which are perfectly decent figures.

AMD didn't make this clear to reviewers. We are told that Ryzen 7 1700 produces accurate figures and hope the same is true for Ryzen 5 so it is only the 1800X and 1700X that is affected this way.

One for your next workstation?

It is tempting to recommend that you build your next video editing workstation around AMD Ryzen R7 as it packs eight cores with SMT and can run close to 4.0GHz with support from some reasonably fast DDR4 memory.

The price is much lower than comparable Intel hardware but balanced against that you will find that AMD Ryzen takes about ten percent longer to process videos than the high-end Intel kit.

AMD’s apparent lack of preparation for the launch of Ryzen suggests there will be gains in performance as motherboard manufacturers update their BIOS files, AMD updates its drivers and the likes of Adobe get to grips with the new CPU.

AMD Ryzen has the potential to be a real game changer but it feels like the wise move is to wait a few months and see how it all shakes out.