A drone light show to go Gaga over 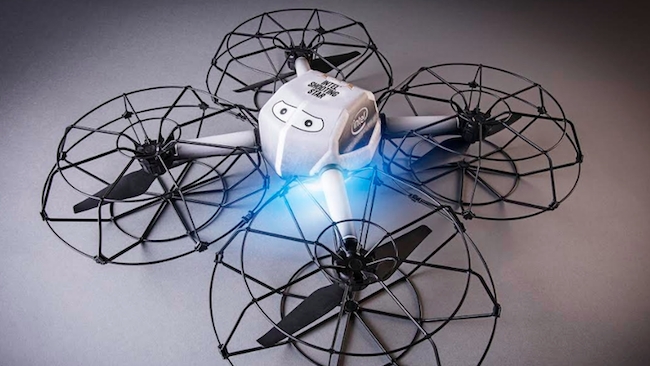 At 280 grams the Intel Shooting Star drones are remarkably lightweight

While the drone-based light show that lit up the start of the Super Bowl LI half-time show last weekend was impressive, the technology behind the Intel system is even more remarkable.

For anyone who has caught even the most passing news about the recent Super Bowl, the half time concert performed by Lady Gaga will be the most likely thing you will have heard about.

Renowned for her sense of spectacle, the concert didn’t disappoint. But one of the main talking points wasn’t about Miss Gaga, but the aerial light show that went on behind her during one segment.

Performed by the Intel Shooting Star team, 300 drones lit up the sky in a perfectly choreographed performance. The story about this drone performance spread far and wide, permeating even the mainstream press. The performance itself was pre-recorded earlier in the week before the show, due to safety considerations, so it wasn’t exactly ‘live’.

But the Shooting Star system that was used to create the light show warrants a closer look. The system isn’t new. It has been used to set records before. Initially Intel flew its Drone 100 system, which, as the number indicates choreographed 100 drones together.

The Drone 100 UAVs weighed in at over 2lbs. So for the new Shooting Star system, the company went about designing the UAVs from the ground up. This resulted in drones that were not only an order of magnitude lighter, at 280 grams, but their construction was also much more simplified, using lightweight materials such as polystyrene for the fuselage cover for instance.

The Shooting Star drones also incorporate propellor guards. But while they do appear to look like children’s toys, their full specification is actually very impressive. They are splash proof, so they can perform in light rain, and they can hold a solid position in winds of up to 10m/s. The system uses the same flight control system used in Intels’ Falcon 8 industrial drone, and the manned Volocopter VC200. This is a highly robust, and proven system, and as can be seen by its use in the Volocopter, is deemed literally safe enough to hold a human life in its hands. Everything about the Shooting Star boils down to safety and reliability.

As an illustration of how far Intel has come, unlike the older Drone 100 system, which took nearly five months to design a show, and needed more than 15 people to run it, the Shooting Star system can be prepped in a few days, and can be run by a single operator if required.

In addition, the software that runs the system can analyse graphics such as logos, and will automatically design the flight path and number of drones required to reconstruct it in the air. This is then simulated so the event organisers can see how well it runs, before taking it live.

While the Lady Gaga show was impressive, the Shooting Star team has flown many more drones simultaneously. 200 more to be precise, bringing the total to 500, to set a Guinness World Record for the most UAVs in the air simultaneously. The shows no doubt will only become more spectacular as time goes on.

The system does open up some intriguing possibilities way beyond the entertainment space. For example, a high number of drones armed with cameras could be used for very fast area mapping, or search and rescue, covering a vast area all in one go.

In the meantime, have a look at the world record 500 drone light show below.