Corsair debuts another nail in the hard drive coffin 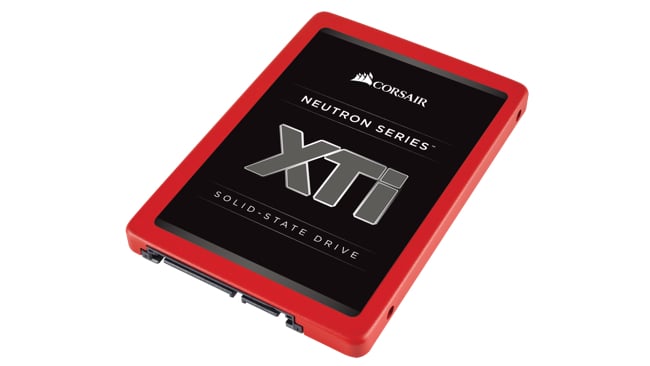 Corsair has announce its new high-performance Neutron Series XTi SSDs in capacities that range all the way up to 1920GB.

Corsair currently lists three 960GB models of SSD, so 1.92TB is a big step forward and represents yet another nail in the hard drive coffin.

The bad news is that Corsair has only officially announced 240GB, 480GB and 960GB Neutron XTi drives, with the 1.92TB unit 'coming soon’, which is a bit of a shame.

Neutron XTi has a great deal in common with the current Neutron XT and appears to have carried over the quad core 8-channel Phison S10 controller. The change comes with a doubling of memory density which appears to be a result of a shift from 19nm to 15nm Toshiba MLC NAND.

It is worth mentioning that Patriot announced a 2TB Ignite SSD at the start of Computex that also uses the Phison S10.

Judging by the pricing of Neutron XT it may well be the case that Neutron XTi prices are a straight one dollar equals one pound with the 1.92TB model hitting £600. We have to hope that prices drop by a significant percentage to make Neutron XTi competitive.

Here's the essence of the Press release:

With a blisteringly quick quad-core Phison controller and performance MLC NAND, Neutron Series XTi offers SATA 6Gbps-saturating transfer speeds of up to 560MB/sec and excellent sustained performance consistency with even the most demanding of workloads.

The Neutron Series XTi utilizes a dedicated quad-core controller for top tier top tier speeds with sustained performance and low command latency. The result is exceptional transfer speeds of up to 560MB/sec, 540MB/s sequential write, 4KB random read of up to 100K IOPS and 4K random write of up to 90K IOPS; up to the tasks of today’s most demanding end-users.

The Neutron Series XTi is also equipped with end-to-end data path protection, ensuring data is protected against corruption from the host to the NAND gate. Combined with power loss protection with advanced SmartFlush and GuaranteedFlush technologies as well as a host of error correction technologies, the Neutron Series XTi secures your drive for an ultra-consistent and reliable experience.

End-to-End Data Path Protection (ETEP): ETEP protects the entire data path within the SSD controller. From the host to the NAND gate, ensuring data is protected against corruption.

Static and Dynamic Wear-Levelling: The lifespan of the drive and its overall reliability are greatly enhanced by wear-levelling.

Advanced Garbage Collection: Overall performance and NAND endurance are enhanced.
Compatible with Corsair SSD Toolbox: Access a number of crucial software tools for getting the most out of your SSD.

All four are backed with a five-year warranty and Corsair customer service and technical support.