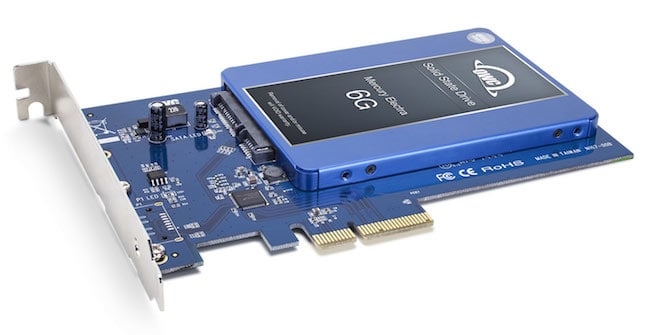 Boiling down press releases to deliver the essence to the readers of RedShark News is a daily occurrence, but we nearly came a cropper when OWC (Other World Computing) sent us information about its new SSDs.

Boot Camp allows users to partition their drive and install Microsoft Windows directly onto their Mac, enabling the simultaneous use of Windows and providing a simple transition between operating systems. While many OWC products already support Boot Camp, a few solid state drives were previously incompatible with the utility once installed - until now.

The innovative company has now released a free download that eliminates this barrier with a simple yet pivotal solution. OWC drives have amplified their overall functionality and effectiveness with the inclusion of Boot Camp capability. With OWC’s new enabler, consumers can now install Windows with the following products:

Those longing for Boot Camp capability can now fully enjoy the first and only PCIe-based flash storage upgrade for these mid-2013 and later Mac laptops.

Moreover, the OWC Aura SSD for 2013 and later Mac Pro, available in 1TB, 2TB, and 4TB capacities, adds Boot Camp to its already impressive internal capacity upgrade of 16 times the factory drive. On top of the higher performance and capacity, the enabler will further expand the possibilities for content creators with recent Mac Pro models.

This made little sense to me as I am a Windows PC user who had foolishly believed the official Apple word on Boot Camp. You know, install Boot Camp on your Mac, prepare the drive, install, choose whether you boot into Windows or Mac OS. Simples.

OWC lists many SSDs for Macs and the specific models they mention look quite conventional. Admittedly the Aura with its M.2 form is more familiar than Mercury Accelsior S and Accelsior E2, which are SATA drives on a PCI Express riser card, but why do you require OWC Dual Boot Enabler for Apple Boot Camp to make the things work correctly?

It took a couple of days to get the answer.

'The one problem with the mentioned products in the press release was that the Mac products recognized these SSDs as an external drive rather than an internal drive once installed. Boot Camp does not run on external drives; however, with the new enabler, the drives are properly read as internal and thus compatible with Boot Camp.'

My guess is that OWC has used an interface chip or controller on these drives, with the result that Boot Camp sees the adapter rather than the drive. I have exactly this problem when I connect an SSD to my PC using an adapter called Apricorn SATAwire, which is great for transferring files and useless for imaging a drive with Acronis.

So now we have unpicked the Press release, we learn the real story here is that anyone who fancies the idea of changing the SSD in their Mac Pro. Mac Book or iMac and intends to use Boot Camp had better do their research in advance.

Thankfully it seems that OWC has played its part to make life easier for Mac Jockies and I have learned something in the process so, all in all, job done.