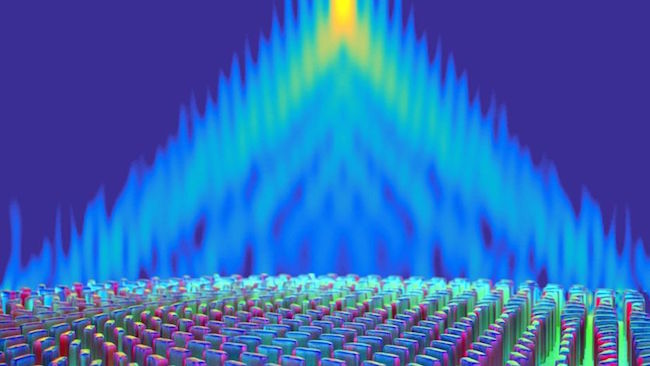 Lenses are curved, we all know that: that’s how they bend and focus light and that’s how they’ve done it since around the time of Aristophanes who wrote of a ‘burning glass’ that was used to light fires in his play The Clouds around 2500 years ago.

As we’ve seen recently with advances in the fields of computational photography and the like though, just because a thing is one way it doesn’t mean it necessarily always has to be so. And a new paper in the US journal Science, ‘Metalenses at visible wavelengths: Diffraction-limited focusing and subwavelength resolution imaging’ points the way to a very different future indeed.

Metalenses are flat. Very flat. And possibly cheap to produce too.

As reported by the BBC, the lens developed by the team behind the paper is made of a thin layer of transparent quartz — paint whitener, or titanium dioxide to be exact — which effectively coast a sliver of planar glass in millions of tiny pillars, each just tens of nanometres across and hundreds high. Individually, each of these pillars reacts with incoming light, their combined effect being to “slice up a light beam and remould it as the rays pass through the array.”

At the moment we’re talking very much about the micro scale — the prototypes produced so far have been limited to 2mm across due to the constraints of the manufacturing equipment at Harvard University where the research has been carried out. But so far the new optics have performed rather astonishingly; outclassing top end lenses used in research microscopes by removing the aberrations inherent in the glass and producing an image rated as 30% sharper.

Of course it is very early days, but the technology here could truly be a game-changer for the optical industry. The new metalenses could be made in the same fabrication plants as computer chips for a start, and with mass production also comes the potential to scale up the size.

"Once you have the foundry - you want a 12-inch lens? Feel free, you can make a 12-inch lens. There's no limit,” comments Professor Federico Capasso of Harvard University, the senior author of the report.

Cell phones are the first target of the tech, with Prof Capasso also reeling off a list of other uses such as quality control in factories, light-weight optics for virtual-reality headsets, even contact lenses (as the metalenses can be made with soft materials). Production lenses? We’re still at the first prototype stages, so it’s not quite time to stick that case of Primes on eBay just yet. But we are getting enough inputs now to suspect that a tipping point may not be too far in the future. The future decades of image capture could be very different from the ones that have gone before.

Update: The Harvard John A. Paulson School of Engineering and Applied Sciences SEAS have developed a centimetre-scale metalens in the visible spectrum that can be manufactured using conventional chip fabrication methods. Read about the new research here.