Improved cameras, modular phones, and the next wave of VR at MWC 2016 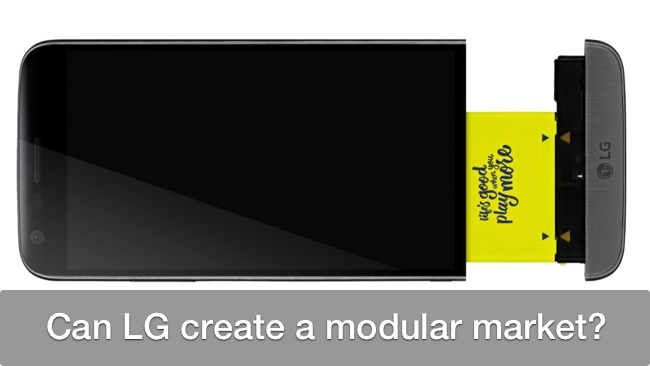 Due to the impact mobile phones and the mobile internet are having on every facet of life, Barcelona’s Mobile World Congress is rapidly becoming one of the most important tech shows on the calendar. And this year has been no exception as rival manufacturers have sought to position their technology in front of everyone else in a fecund market.

How fecund? Well, Cisco estimates that global mobile IP traffic alone will reach an annual run rate of 367 exabytes by 2020, up from 44 exabytes in 2015.

Mobile phone manufacturers often try fairly whacky new things, but not many do it with their flagship product. Nevertheless that’s exactly what LG has done with its newly modular G5, adding an accessory line dubbed (with needless cutesyness) Friends. These snap in to the plain vanilla model: just take the base off, take the battery out, add it to the friend, snap the new assemblage back in place.

Not only does this instantly solve the problem of building an all-metal phone with a replaceable battery, a feature that’s going to be popular with a lot of people, but it offers some interesting user-configurable functionality and usability enhancements. At launch these included a 32-bit digital to analogue converter (DAC) made by no less than Bang & Olufsen, which LG says vastly improves the audio output of the unit, and an ergonomic camera controller that improves one-handed operation, adds a zoom dial, and ramps up battery life by 40%.

This might be useful because the phone also has an upgraded camera in the form of a dual-lens approach: one standard, one 135-degree wide angle, which might mean the end of wobbly panoramas albeit that the wide-angle shots are limited to 8MP, half that of the main lens.

There seems to have been a slight scattergun approach to LG’s recent R&D. The company also showcased a drone controller in a link-up with Parrot, a 360º camera accessory, and even a rather odd rolling ball robot which also featured an onboard camera and a laser.

But with Google’s own modular Project Ara stalled for the moment, there is a chance that LG might just ignite something with its own modular approach to the future. More Friends are apparently in development…

Samsung goes Back to the Future

Samsung’s latest flagship, meanwhile, have added a few features back into mobile technology that many people have been missing: MicroSD cards to expand storage and the ability to endure a quick dunking in water without becoming irretrievably dead.

Beyond that the Galaxy S7 and Galaxy S7 Edge are largely iterative releases, until, that is, you get to the camera. An f/1.7 aperture lets in double the amount of light that the old f/1.9 lens did before, which should help improve low-light performance. Plus, and this is a biggie, it is the first non Canon-product to feature the company’s dual pixel autofocus technology, which should mean much quicker stills focus lock and smoother focus tracking in video.

Part of the consequence of all this is a possibly less welcome retro move and a step back to 12MP from the 16MP that featured in the S6. But ranked alongside MicroSD ramping up storage to a potential 200GB, a new high capacity battery that can achieve a claimed 15 hours of HD video playback, and IP68 water resistance (1.5m of water for 30 minutes - i.e. dropping it and bricking it via the toilet bowl will be a thing of the past) it seems possibly a small price to pay.

VR, The Next Wave

So, after a long wait, HTC has announced the consumer pricing of the HTC Vive VR headset will be $799, an unwelcome $200 over and above the price of Oculus Rift but at least it does include two wireless controllers with haptic feedback, two location sensors and two games — Job Simulator: The 2050 Archives by Owlchemy Labs and Northway Games’ Fantastic Contraption.

LG had its own 360 VR gear on show, which has its own inbuilt screens making it notably smaller and lighter than rival Samsung’s Gear VR. It can also show higher resolution images (638 pixels per inch), and in concert with LG’s almost wilful desire to buck trends at MWC 16, also connects to the phone handset via a USB 3 cable. On the downside this means you have a tether on your headset on the upside it means you can use your phone as a touchscreen controller. for the content.

Not much new in the VR arena from Samsung, though it did have a nice 360º camera on display which, in common with its retro theme this year, looked very much like an old eyeball webcam. Two f2.0 195-degree lenses are mounted opposite each other, with the extra 30º of overlap being precisely where the software stitches together the image.

It still managed to help create what could well be the defining image of the technology to date: Facebook’s Mark Zuckerberg strolling past serried ranks of oblivious journalists to the stage of its press conference where he was unveiled as if it had been a magic trick. 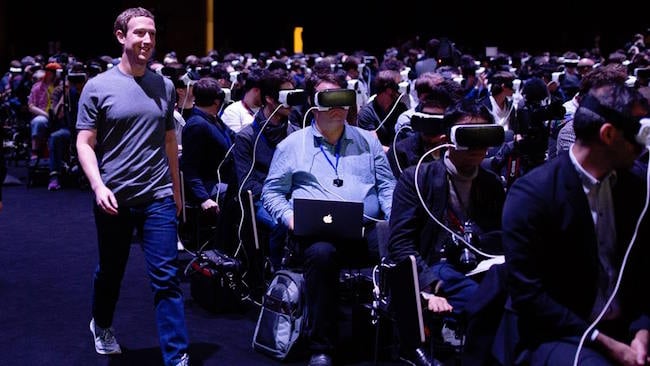 Technology be damned. The fact that a) it proves that immersion in VR can make you miss what’s under your nose, even if that is one of the world’s most famous billionaires walking right past you and b) that a near riot ensued as a result of his sudden appearance, with an undignified stampeded of journalists and photographers towards the stage, might well be the story of the show.