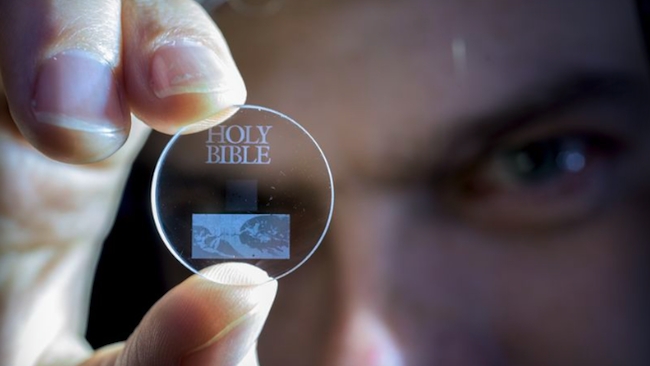 RedShark Replay: How long do you want to keep your data safe and secure? How does 13.8 billion years sound?

We’ve written about seriously long-term storage a couple of times before, both Piql’s technology and the only slightly ironic prospect of Kodak using current film stock’s longevity to provide a safe harbour for your images for the next 100 years.

In a bit of idle speculation towards the end of that latter article, we wrote this:

"The best (solution) we have come up for so far at Red Shark is pictorial information carved on stone tablets and lifted to the Lagrangian points of gravitational stability in the Earth / Moon system (L2 is our favourite as it's nice and out of the way on the far side of the Moon). That should hopefully give us several billion years until the Sun turns into a red giant. In fact, we could even monetise this idea as a service to the rich and famous: look out for us on Kickstarter soon, we need a rocket."

Turns out we were a long way short of the mark.

As The Verge reports, using nanostructured glass a team from the University of Southampton has developed a recording and retrieval processes of five dimensional (5D) digital data using femtosecond laser writing.

“The storage allows unprecedented properties,” writes the team, “including 360TB/disc data capacity, thermal stability up to 1000°C and virtually unlimited lifetime at room temperature (13.8 billion years at up to 190°C) opening a new era of eternal data archiving.”

As a bit of a head-turning, PR-friendly demonstration of the technology, it has created digital copies of four landmark publications — the Universal Declaration of Human Rights, Newton’s Opticks, the Magna Carta and the Kings James Bible — on one-inch glass discs which could now comfortably outlast a) the human race and b) pretty much everything else as well (depending on your views of entropy and the eventual heat death of the universe).

The documents were recorded using an ultrafast operating laser, producing extremely short and intense pulses of light, and the file is written in three layers of nanostructured dots separated by five micrometres. Glass is used because it’s very chemically stable and, providing you can keep it at a temperature of below 1000°C, won’t melt or warp.

The self-assembled nanostructures created by the laser change the way light travels through glass, modifying the polarisation of light, that can then be read back by a combination of optical microscope and a polariser.

It’s neat technology, provides an astonishing leap in data capacity (it’s estimated that a Blu-ray sized disc could hold 360TB of data, around 3000 times more than Blu-ray itself), and now firmly joins the list of next gen storage techniques under development if the Southampton team can find commercial partners for the venture.