The Toaster Problem and what it tells us about technology 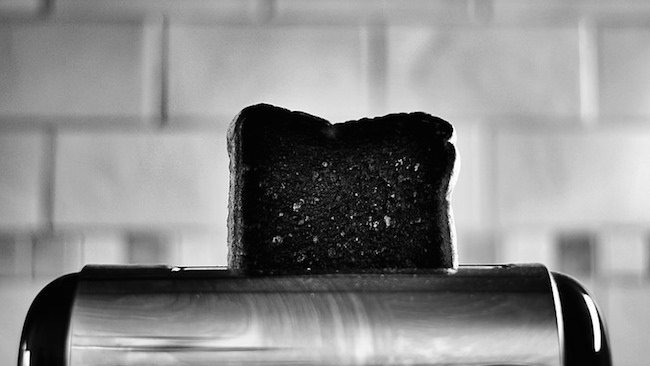 Recently, I had to buy a new toaster. You would think this was a simple process: it’s not. And the problems I encountered along the way tell us a lot about what is wrong with buying technology today.

Quickly browning two slices of bread at the same time should not be a problem that vexes modern technology too much, but trying to buy a modern toaster that a) works how you want at b) a price you are prepared to pay is a step into a vortex of deeply unsatisfying compromises.

And this is important, because this process can be easily mapped to other products, such as cameras.

Toaster A is thought of as okay by 50% of people, loathed by 20%, and costs £35. Toaster B costs £120 and is considered a religious experience by 60% of buyers, but the manufacture apparently switched to China in 2012, the new components are shoddy, and the recent reviews are poor . Toaster C meanwhile is £15 but the slots are too small for large loaves. Then there is Toaster D whose walls are made of glass so that you can see the toast browning inside. Toaster D looks great, costs £150, but is apparently not so good at making toast.

Every single time I stepped down the decision tree on a likely candidate, I ended up coming across a deal-breaker and reversing my course. It took days and, in the end, I ordered a variety of Toaster A which is sitting in the kitchen at the moment. It looks all right, the bread fits, it toasts unevenly, it feels plasticy, and — if I’m lucky — it might last me a couple of years. It is the classic ‘meh’ purchase.

Currently, I’m just very glad I’m not sitting here with a £500 (or significantly more) camera in my hands going ‘meh’.

So, what is going on here? How has the consumer experience become quite so complex and unsatisfying? I reckon it’s down to the interplay between two factors: an over-reliance on the Wisdom of Crowds and faulty manufacturing processes.

The Failed Wisdom of Crowds

We tend to rely increasingly on online reviews to help make us purchases, assuming that the more people have tried something, the more true to life the verdict on a given product will be. That’s true to an extent, but it fails on several counts including the fact that a) people might not be testing the same thing (see below) and b) people tend to bring their own agenda to these things.

These are not objective reviews. Everybody wants subtly different things from a product, and unless these are broken out into subcategories then no amount of group intelligence is going to come to a rational conclusion about them, especially in the low sample sizes that reviews tend to feature.

In his book ‘The Wisdom of Crowds: Why the Many Are Smarter Than the Few and How Collective Wisdom Shapes Business, Economies, Societies and Nations’, James Surowieck defines the three conditions required for a group to be thought of as intelligent as diversity, independence, and decentralization. But website reviews are not independent — the reviewers tend to read other reviews, leading to notable clumping. And some outliers also have to be taken into account, notably the low scores given for incidents outside of the scope of a review, such as a product not turning up on time, being a different colour from the description etc.

The result is that any reviews have to be then read through and filtered, which then adds your own bias to the process.

And then we get to the point where people are not reviewing the same thing because the build quality of many modern consumer products is almost laughably haphazard.

One of the unfortunate consequences of constant technological progress has been the disappearance of the over-engineered product of the past: the consumer good that lasted for decades and was even sometimes mentioned in wills. Lean manufacturing techniques have pared production down to the bone, with the consequence that not everything works the way that it should any more.

The toasters give it away. For every 10 five star reviews of a toasting unit, there will be one where the customer tells a woeful tale of a malfunctioning unit — sometimes, multiple malfunctioning units — poor build quality, uneven toasting or some other bread-related calamity. And spot too many of these and you realise you are engaging in some sort of form of toaster roulette. The unit you take out of the box might be the one that works perfectly for five years, it might be the one that lasts five minutes before trying to incinerate your kitchen.

The problem is that at a certain level of consumer good it is easier for the manufacturer to pass the burden of quality control onto the consumer. Production lines are taken up to the point where they produce Acceptably Bad Quality products and then, rather than spend extra resources on tightening up that last 10% or whatever, the onus is placed on the consumer to return products, claim refunds, unearth warranties etcetera.

And don’t for a moment think this is confined to consumer goods. At one point in my career I worked with a well-known manufacturer of post production kit, none of whose equipment worked out of the box. None of it. ‘That’s okay,” I was told, “our competitors are even worse.”

So, how do we choose what to buy?

If you have a budget, it’s simple: you get the best you can afford.

If you don’t it becomes more complex. The paradox of greater consumer choice is greater consumer confusion, but I would argue that one thing we need to do is go back to basics and actually start to use our senses with these things: pick them up, feel their weight, poke them, prod them, and more than anything be mindful of bringing something into our lives and give the decision due weight.

It is one of the reasons why tradeshows are still going and the stands of the camera manufacturers always have people on them. When you’re buying a camera you want to feel the way the buttons work, you want to see how they fit under the span of your hand, you want to feel the weight, and the balance, and make the myriad other small judgements that lead you to decide whether to buy something or not.

A review will guide you as to which camera you might want to pick up and play with, it won’t tell you which one to buy.

Oh, and by the way, the best toast I ever had was cooked on a cast-iron Aga range cooker — you place the bread inside a wire mesh paddle, put it on the ‘boiling plate’, close the heavy cover, turn once, and it’s done. Agas start at around £5000 and you have to have a builder visit your house to determine whether your floor is strong enough to support one. Now *that* is what I call a toaster.