What Hubble did next: Jupiter in 4K 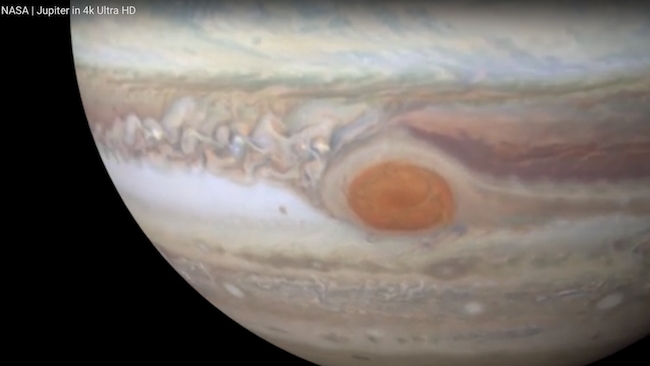 The (Not Quite So) Great Red Spot

The image of Jupiter above was not taken by a probe, but by the Hubble Space telescope in orbit around the Earth over half a billion kilometres away. And that means some glorious 4K footage.

NASA is certainly making the most of its new 4K YouTube channel, with the new images from Hubble of the gas giant Jupiter revealing some interesting new data for planetary scientists such as a newly identifiable filament in the massive Great Red Spot.

Somewhat astonishingly for those of us that remember it being built in orbit, Hubble’s now a quarter of a century old, and, despite some famous set-backs, is still delivering fantastic images and data to the scientific teams that tap into its mirrors around the globe. One of its latest projects is to complete an annual audit of the solar system’s gas giants, the perfectly sensible idea being that the larger the dataset, the more we can understand how these bodies change over time — such as the rather interesting info that the Great Red Spot is currently shrinking (240km shorter than in 2014).

These images were taken with Hubble's Wide Field Planetary Camera 3, the unit also responsible for the famous Extreme Deep Field image taken back in 2012. Meanwhile, Hubble’s successor, the James Webb Space Telescope is, despite numerous delays, currently on the launch slate for 2018. And while its 6.5m diameter mirror is dwarfed by the 24.5m Great Magellan Telescope under construction in Chile, it is up and above the atmosphere and should see a further leap in understanding of the cosmos.

Plus, of course, there’s a 4K channel ready and waiting for its images when it launches…