We’re getting used to thin screens, but this is closer to wallpaper 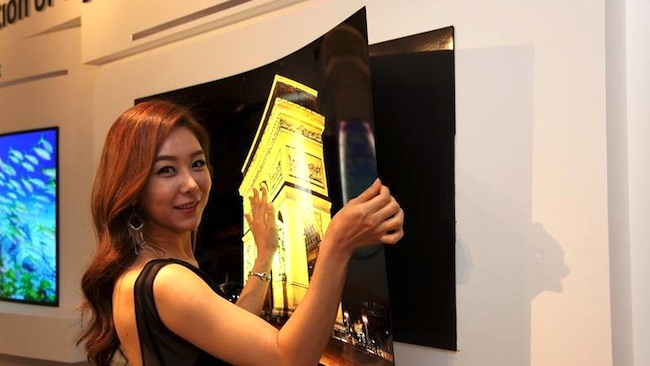 A model unpeels a 55in LG Display screen from the wall

At a media event earlier this week LG Display showed off a brand new 55in OLED panel that you can literally stick on and peel off the wall via a magnetic pad.

It is astonishingly thin: thin enough (and flexible enough) to be peelable as a model demonstrated at the event and that keeps the weight down to 1.9kg (4.19lb) which means in turn that you can just stick it up with a magnetic pad on the wall. Of course, there’s going to have to be some plumbing in the wall in terms of power to drive it, but we would be surprised if the installation industry didn’t very quickly come up with a solution to hide that pad in a suitably discrete manner.

It’s part of a larger strategy surrounding OLED too for the company that involves ramping up production from Q3 this year. This year’s sales target is 600,000 units, next year’s is 1.5million, with most of those unsurprisingly going to its affiliate, LG Electronics. Watch for even larger displays — 99in is possible later in the year — while the company is also planning on significant investment in the small to mid-size market, wearable devices, vehicle dashboards and the like.

Crucially it looks like costs are going to start coming down now too. LG reckons it gets an 80% yield out of its OLED production nowadays (ie, it only has to throw away 20% of what it makes), which is still lower than LCD but catching up all the time.

It’s an interesting statistic. OLED has both been hailed as the saviour of displays and written off as a failure numerous times over the past few years. But with peelable and stickablesets suddenly appearing in its repertoire, it’s hard not to see it moving on from its current position at least.