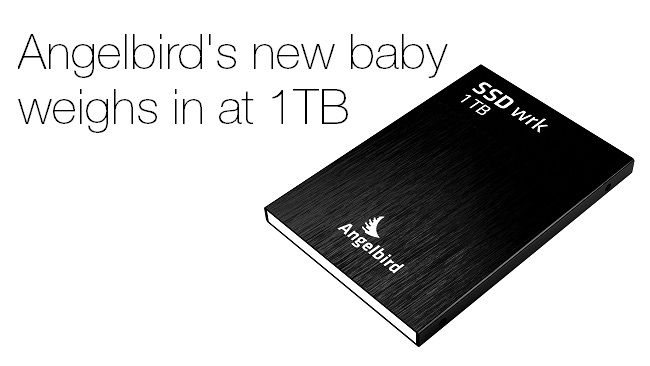 Angelbird have released 1TB models of their "WRK" SSD drives, with improved performance and a version specifically for Mac computers.

Angelbird are an Austrian manufacturer of SSD drives, we've looked at their products before and were very impressed with the build quality and the performance. They have now increased their range of "WRK" drives to include a 1TB model and Mac specific versions.

All the WRK SSD drives are 2.5" drives with a thickness of just 7mm, suitable for even the slimmest laptop. They have low power consumption and the new 1TB model is capable of writing at 456 Mb/s and reading at 564 Mb/s with up to 72,000 Input/Output Operations per second.

They come in standard or Mac versions with the Mac version having built in support for TRIM which is natively supported in OSX. TRIM helps the system to extract maximum performance from the SSD drive and can extend the useful life of the drive. TRIM is also available on PC's but requires drivers to be installed and configured for TRIM support.

Angelbird, Austria's premium SSD manufacturer, is now offering the SSD wrk and SSD wrk for Mac with 1 terabyte of storage. The new drives combine the highest storage capacity with great performance, robustness and efficiency in an ultra-slim aluminum chassis - making it the perfect choice to upgrade a Mac®, MacBook®, MacBook pro, PC or Notebook.

Angelbird has made no compromises in quality for its new SSD wrk models, which boast an ultra-fast SATA 3.1 6Gb/s interface that is also fully downward compatible with legacy computers and operating systems. The SSD wrk uses the SMI 2246EN controller and the case is made of high-quality matt-black anodized aluminum and houses custom-packed multi-level-cell NANDs. The maximum read and write speeds are 564 and 456 megabytes per second. The new 1-terabyte versions reach 72.000 IOPS (Input/Output Operations per Second). With a height of only 7 millimeters the SSD wrk 1 terabyte fits even into the slimmest notebook or desktop case.

The SSD wrk for Mac is ideal for upgrading older Apple models to the ultra-fast SSD technology. Specifically the device is equipped with native TRIM support, a feature that works straight out of the box - enabled by default in OS X, including Yosemite. There is no need to install any additional software, drivers or a TRIM enabler. As with all models of the SSD wrk series, the 1 terabyte versions are equipped with additional over-voltage and ESD protection features as well as overload protection and EMS protection. Customer security is provided by a five-year warranty.

"We are happy to announce the extension of the successful SSD wrk-series with the two new 1 terabyte versions. This series now covers the entire consumer SSD spectrum, offering perfectly adapted models for every requirement," said Roman Rabitsch, CEO of Angelbird.

Access to PSP (Personal Support Portal)
Angelbird offers its customers the opportunity to register for the Personal Support Portal (PSP) using the serial number on their device. The PSP provides information such as the remaining warranty period and free downloads of full versions of current programs. The software library is constantly being expanded with new titles and in the near future technical assistance will also be offered via the PSP. Cases of warranty or repair can be handled entirely on the portal.