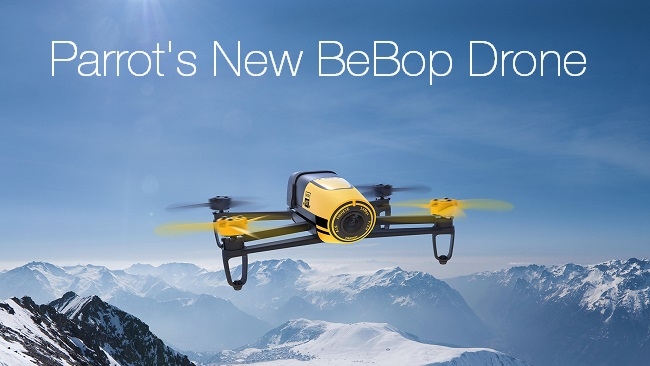 It seems there is a new drone every day, hot on the heels of DJI's Inspire 1, Parrot is releasing its new "BeBop" Drone which features some very clever technology

Altough the DJI Phantom is probably the most well known Quadcopter for video enthusiasts, French company Parrot has actually been making drones for the consumer market since 2010 with the AR Drone and AR Drone 2 both selling very well.

Parrot has just announced the successor to the AR Drone. Called the BeBop it is both smaller and lighter than the AR Drone and features an onboard HD video camera with 3-axis stabilisation. The BeBop is aimed at novice users and has an array of technology to make it easier to fly and to capture great video footage.

The BeBop is controlled by WiFi from a tablet or smartphone. There are iOS and Android versions of Parrot's Freeflight 3.0 application available which allow you to fly the BeBop but also to see the video from the onboard camera. The BeBop has onboard GPS, pressure sensors, sonar for measuring height at low altitudes, and a downward facing camera system that uses optical flow to measure the movement of the drone across the ground. This all adds up to a remarkably stable vehicle, indoors or out. Tell the BeBop to take off and it will rise to a height of about 2 metres and hover, waiting for input.

You can also use the app to plan a flight using a series of waypoints, so for aerial filming of a building or a scene from a production you can easily repeat the same flightpath, which leaves you free to concentrate on the camera. When you are finished you can just touch a button to tell the BeBop to return to it's start point.

The camera is the next clever feature. It is equipped with a 14 Megapixel 1/2.3" sensor with a 180 degree field of view and can take stills at 3800 x 3188 pixels. HD video is cropped from the sensor which not only allows the image to be stabilised in 3 axes but also allows you to pan and tilt the view from the camera. The image is also processed to remove the barrel distortion that would normally occur with such a wide angle of view. There is 8GB of memory onboard but this can be expanded using a micro USB stick. Check out the video below

For more advanced users Parrot is also offering the Skycontroller, a control system with more traditional joystick controls, a mount for your tablet or smartphone and an extended WiFi antenna which can increase the range of control up to 2 kilometres. It also features an HDMI output which allows you to connect a First Person View headset and, if used with the Oculus Rift VR headset, you can use the movement of your head to control the camera view. 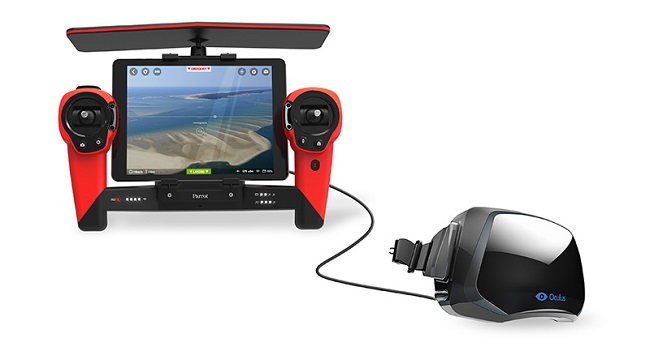 "The Bebop Drone masters several challenges: performs amazingly while flying and films in 1080p in a stabilised manner; all of this with a size reduction of 25 percent compared to the AR.Drone," said Henri Seydoux, CEO of Parrot. "To achieve these results, our engineers worked for more than three years. The Bebop Drone embeds high-performance processors, a graphics co-processor with professional-grade camera capabilities. With Skycontroller, we enter a new dimension, one of immersive and high precision piloting."

The BeBop will be shipping in December and will be available at Apple stores and Best Buy. The price for the BeBop with two batteries will be $499 and with the Skycontroller and three batteries it will be $899.