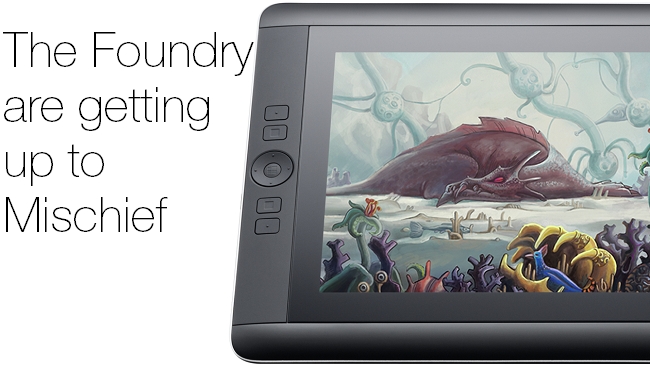 The Foundry are up to Mischief

After a teaser last week, The Foundry has announced its acquisition of Mischief, a cross platform drawing package that uses new technology to provide artists with an infinite canvas.

The Foundry is well known in the post production world, with products such as NUKE, MARI and MODO in use daily by VFX artists around the world, so its announcement of the acquisition of Mischief comes as a bit of a surprise.

So what is Mischief exactly? Well it's a sketching, painting and drawing package that runs on Mac or PC. It was developed by Sarah Frisken as part of a research project at Disney Animation to try to find a better way of using digital tools for traditional animators. She co-invented a new technology called "Adaptively Sampled Distance Fields" which allows paint strokes to be represented mathematically, but with far more information than traditional Vector based painting systems.

What this means is that Mischief allows artists to draw and paint on an infinite canvas, with no restrictions on resolution or loss of quality when zooming in to details, but with very small file sizes. The drawing experience is as close to pen on paper as possible and the interface is intuitive and friendly.

Obviously you need a pen and tablet to take advantage of the paper like interface and Mischief has been developed to work well with Wacom tablets and the Cintiq range of monitors. Hardware-wise it uses the GPU extensively and requires Open GL 2.0 so most modern Macs and PC's should be fine. You can download a trial version to test it on your system.

The Foundry have assembled a team to take Mischief further, including Chris Cheung who was previously responsible for Sketchbook Pro at Autodesk. They will be continuing to develop and market Mischief as a standalone application, but will also be looking at ways to integrate the new technology into their other products. They are also looking at the possibility of an IOS version for the iPad and Android versions for other tablets.

Mischief is available to download on the Mac App store for $25 or you can go to the website at www.madebymischief.com to download the Mac or PC version. There is also a 15 day free trial and a completely free version, Mischief Free, which has a limited set of tools.

The Foundry, provider of award-winning creative software used globally by leading artists and designers, expanded its market reach while simultaneously bolstering the strength of its technology by acquiring Made With Mischief. Its flagship product, Mischief, a pen-based sketching application for Mac and Windows, blends sophisticated underlying technology with an elegant, clean interface.

This makes it easy for creative people to explore, create and share art in a digital format on a truly infinite canvas while preserving the emotional experience of the physical. Under the terms of the private deal, Made With Mischief, founded by Sarah Frisken, will become a wholly owned subsidiary of The Foundry. The company will be headquartered in Boston, with team members located in Boston, London and Shanghai.

"Made With Mischief brings both immediate and long-term value to The Foundry," said Bill Collis, chief executive officer of The Foundry. "First, this allows us to enter a new market, with an offering that's both powerful and simple to use, ideal for professionals and creative hobbyists alike. Second, Mischief uses a powerful new technology that has massive potential to impact future creative solutions. As we work with Sarah and her team to enhance the current Mischief platform, we'll identify applications for our design, visual effects and gaming customers as well."

Mischief is powered by a revolutionary patented shape representation, known as Adaptively Sampled Distance Fields (ADFs), co-invented by Frisken. ADFs have several advantages for creative applications: they provide high-quality stroke rendering; they are amenable to hardware-based rendering so drawing is extremely responsive; they are very compact, resulting in small file sizes; they can be scaled without introducing pixelation artifacts; and they can accurately represent much richer and more complex shapes than traditional vector-based stroke representations. For Frisken, the acquisition of Made With Mischief by The Foundry enables her to retain her core vision of providing high-quality software tools for wide range of artists and to preserve its accessible price point, while bringing future versions of the platform to an even broader audience.

"The Foundry has a proven record of taking exciting, innovative concepts and commercializing them for a broader market," said Sarah Frisken. "By becoming a part of The Foundry, we now have the ability to grow our team, to be more responsive to our users, and to further our vision. I'm also very excited about the addition to the team of Chris Cheung, who will head our product agenda. Chris has invaluable experience in building a large and loyal following in the artistic and design communities so we're very happy to have him on board. With our talent and technology, we will create new and exciting products that in turn create new possibilities and experiences for our customers."

In the new organization, Frisken will become chief scientist, allowing her to explore the convergence of technology and art in future innovations. She will work closely with Cheung to drive the conceptualization, development and commercialization of digital artistic solutions. Christopher Kenessey, chief sales and marketing officer for The Foundry, will assume the position of president of Made With Mischief. In his new dual role, Kenessey's executive leadership will drive adoption of Mischief among a broader market while also identifying development opportunities through technology crossover.

To encourage new users to play with Mischief, the company will offer Mischief-Free, a new limited-feature edition that is completely free of charge. Mischief-Free includes basic brushes, colors and a full infinite canvas experience. It is ideal for young artists, enthusiasts and anyone with a graphics tablet.