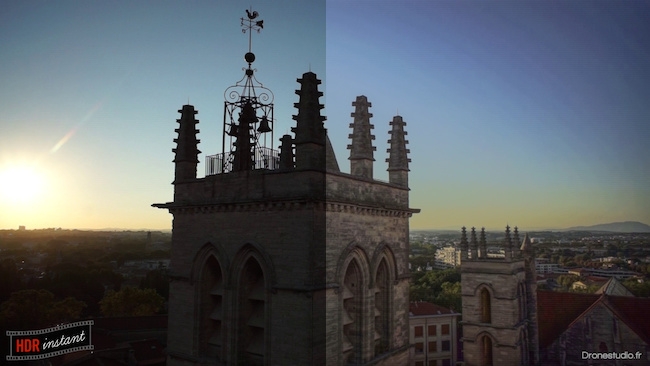 Before and after drone shot...

Essentially, the software uses some patent-pending technology to stack the neighbouring frames of a selected one to increase the signal to noise ratio, thereby reducing noise and increasing dynamic range. It also applies a morphing algorithm to the image to remove movement between the stacked frames, which will be useful for one of its main target markets, UAV flyers.

The software was developed by Doctor Jacques Joffre, who co-founded HDRSoft (the company behind Photomatix) about 10 years ago with his daughter. According to the new company he’s established, HDRlog, HDR photography works great on static subjects but as soon as there is movement in the scene you get ghosting. Joffre decided to investigate how to extract HDR images from video to remove many of the constraints of ‘traditional’ HDR still photography, such as the need for a tripod and a static scene), and HDRinstant was the result.

Version 1.0 of HDRinstant will ship with more sliders, tools and presets and will be available for $89 (with preorders significantly cheaper). A mobile version is under development and a video version also a distinct possibility.