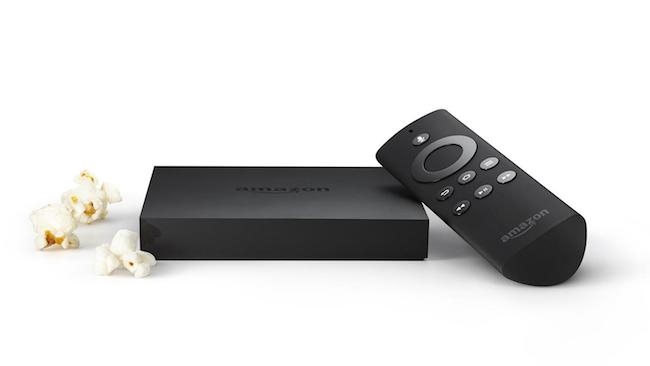 As we predicted a while back, Amazon has launched its own TV streaming device, Fire TV, and the device has some impressive surprises under the hood. Will it be enough though to succeed in an increasingly crowded market? Here are our top ten reasons why we think it could.

First off, it's worth stating that Amazon is entering into a slightly unusual market in that it's increasingly crowded but also, considering the companies involved, still rather small. In the US for instance, where the device has initially launched at a $99 pricepoint, Apple dominates the DMA (digital media adaptors) field with a 43% share of devices, according to recent research. This is followed by Roku, the only specialist here, which has 24%, and Google's Chromecast which has achieved 14% penetration in fairly swift order.

One analyst has likened this to Dr Pepper suddenly entering a market where Coca Cola and Pepsi are the main incumbents. But here's why we at Red Shark think it might retain its fizz.

1. Content. At launch it features content from all the main players (with the notable exception of HBO Go) and, of course, it also runs the newly launched Amazon Prime TV. Presumably as it moves into other territories it will add other providers too, such as the BBC iPlayer. And it should be able to do this easily for reason number 2 below.

2. Openness. Fire TV runs an Android ecosystem giving it access to a wide range of apps already out there and making it easy for content providers to extend their services to the box. It will be interesting to see how consumers take to this as the walled garden approach, exemplified by Apple among others, tends to be very unpopular once a generally open system emerges. Apple TV retains the killer app of being able to stream iTunes, but is that enough on its own?

3. Games. Lots of games. "People play games on tablets but they want to play on TV," said Amazon's Peter Larsen at the launch, and Amazon has been busy forming partnerships with gaming firms such as Sega, EA, and Disney. Thousands of Android titles are promised for next month, while it is also expanding Amazon Studios to build bespoke games. This could be a real winner and potentially stratify the gaming audience further into hardcore console buyers and those happy to run a DMA, all of which mirrors the current PC/tablet division. A dedicated joypad — dubbed rather cringingly Voila — will be available soon. Oh, and so will Minecraft.

4. Power. Rumour had suggested a dongle akin to Chromecast, but Fire TV owes more to Apple TV and consequently has more under the hood, notably a Qualcomm quad core processor, 2GB of RAM, 8GB of internal flash memory, and a dedicated Qualcomm Adreno 320 GPU for the above gaming. Testers that have played around with it so far suggest that it supports at least some form of multitasking, obviating the tiresome and continual booting up of apps while switching screens on other devices It supports 1080p streaming, includes Dolby digital surround sound out via HDMI out, and is powered by dual-band Mimo Wifi. Oh, and as we're talking connectivity, its remote is linked by Bluetooth, meaning no more leaning round tables, the cat etc to point it straight at the receiving box.

5. Voice search. Not generally considered a killer app, Amazon has taken advantage of that Bluetooth connectivity and put dual digital microphones with noise suppression technology inside the remote. At the moment that's mainly providing the voice search function (which, while a welcome addition seems to only be reliably working within the Amazon content libraries for now) but there is certainly more that could be done with this.

6. Kids. Mirroring functionality developed for its tablet range, Amazon FreeTime lets parents create custom profiles for up to four children, choosing the movies, TV shows, apps, and games they can access, setting up daily screen limits and restricting certain types of content. It's a neat subset that will appeal to many families and also provides a glimpse into future business models linked to the device; Amazon also upselling FreeTime Unlimited, an all-you-can-eat content subscription designed for kids aged 3 to 8

7. Looks. It's not Apple, few things are, but design wise it's at least heading in the right way up the top end of the form/function curve. The Voila controller might look like an Xbox unit, but that works, and the remote doesn't have the polished aluminium minimalistic heft of the Apple one, but it's not going to look out of place in anyone's living room.

8. Usability. A reportedly speedy, easy to navigate UI coupled with the voice recognition capabilities in the remote mics could finally blow all the bad associations with clunky Smart TV interfaces out of the water. People want to buy a device that they, their kids and their parents can all use, and this could be on the verge of being it. And in the same way that Kindle operates, Fire TV arrives pre-registered to your Amazon account and is — theoretically at least — simply plug and play.

9. Timing. Its competitors have seeded the market — Apple sold 10m devices worldwide last year — and things are just poised to properly take off. While the DMA market only made up 7% of OTT device sales last year, this year sales are set to grow by 24%. Plug all those figures in, add the fact that 1 in 5 US households, that's 24m of them alone, are expected to own a dedicated media streaming device by the end of the year, and you have the real sense of a blue touchpaper being lit.

10. And finally, this is Amazon we're talking about: one of the largest retailers in existence who can leverage so many other parts of its vast corporate entity to help sell these boxes - from content creation to setting up mailshots to around half the planet - that you really would not want to bet against them.