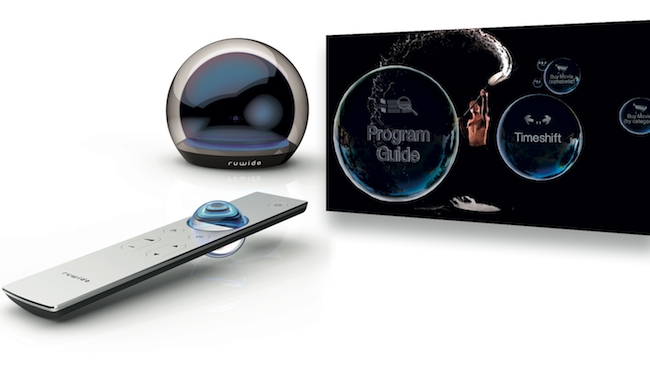 One of the obvious things about the current television landscape is that remote controls have not really kept up with the devices they control; simply adding more buttons does not an ergonomic interface make. Which is why remote specialist Ruwido is launching its latest device with what it dubs a '3D input sphere'.

The input sphere is all part of what the company refers to as its ‘bubble interaction mechanism’, an end to end system comprising a remote control and set-top box, which syncs seamlessly with the company’s next generation user interface, all of which has been developed specifically to ensure a new dimension of functionality (or 'function pleasure' as the company terms it).

Perhaps best to let the company statement take over: "The navigational element, the ‘3D input sphere’, is fundamental to the experience, allowing the interface to be explored with ease, so that the user always has a complete understanding of where he or she is positioned. The incorporation of tactile feedback functionality into the solution allows the user to directly communicate their intentions to the dynamic interface, putting joy back into navigation. Rather than static elements, content and menu options are displayed in dynamic ‘bubbles’ that can be chosen or swept away, depending on people’s interest."

And if all that sounds a bit touchy feely, well that's exactly what it is: all about touch and feel. The importance of a good interface cannot be underestimated — even Apple's detractors acknowledged they got it very right with the click wheel of the iPod, for example, and then there’s Douglas Engelbart’s mouse to think of — and it's long been thought that connected TV is being held back by the sheer awfulness of its collective UIs.

"In the context of the living room experience, consumers want and need an interface which both retains and improves upon the aesthetics and functionality of traditional linear menus," comments Ferdinand Maier, CEO of the Austrian company, adding that they also eschew unnecessary complexity nowadays too (which take us back to the click wheel again)

The new control is crafted from one solid piece of high quality (though as yet unspecified) material, while a brushed aluminium body seamlessly encloses the ‘3D input sphere’. It might not be quite a mass market proposition yet but it is elegant, it is simple, and — with a bit of customer programming — will probably do everything you might ever want of a TV remote control with far fewer buttons than you would have thought possible. Look for cheaper versions with haptic feedback and probably a click wheel style interface to make an appearance soon.