Opinion: The Amira in context. Where does the Amira float in a sea of capable new cameras? 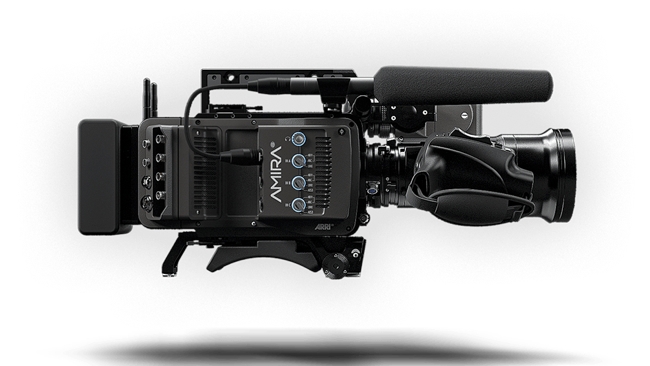 A new, fairly expensive ENG-style camera that's only HD resolution? But it has the same sensor as the most sought-after camera in Hollywood (according to the Oscar nominations)!

It's interesting to notice how Arri have marketed their cameras. Everybody seems to love the Alexa look but mostly that's taken the backseat in the marketing. In the case of the Alexa the accent was all on workflow. "Shoot > Edit > Simple" was the tagline. Arri went out of their way to make the post workflow as simple as possible. They used SxS media that people were already familiar with from Sony cameras and the camera also recorded in ProRes: an intermediate codec from Apple that people were already very familiar with from Final Cut.

The message was that if you used this camera, it’s going to be really easy to edit the footage, and oh yeah, it takes great images that can rival any high end cinema camera too. (Nearly forgot to mention that). This was very clever marketing because in my view the camera market has been something of a mess ever since it moved on from DV codecs. There was a proliferation of codecs, media formats and workflows, meaning that you sometimes had to choose editing software based on the camera you were using or suffer painful transcoding issues. Arri chose to make the camera record directly into a codec designed for people to transcode into for editing, and it would work right away with one of the most popular editing platforms of the time, Final Cut Pro 7.

Of course in reality people might still end up doing pre-edit grades and all kinds of things before they edit but Arri offered the option that if you really wanted to, you could go right to the edit directly from the SxS card! It a world where people were banging their heads against a wall with at yet another codec or media format to deal with, it was like Arri had come down off the mountain with a shining light to lead us all to better times. 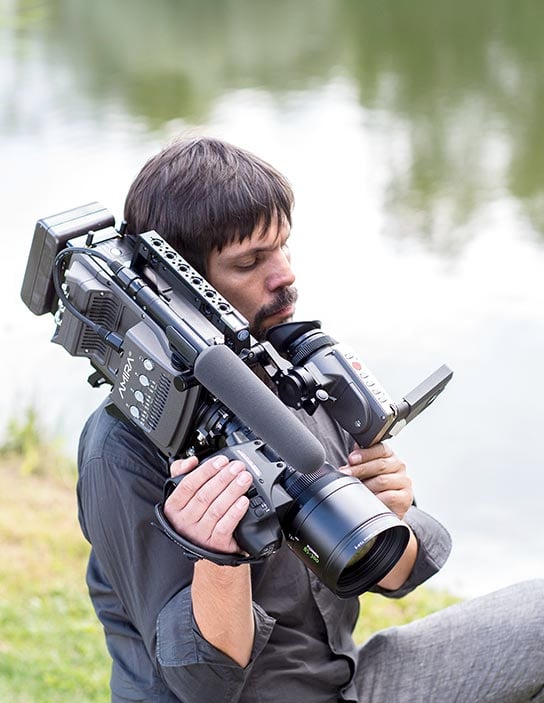 Having done the "Shoot > Edit > Simple" thing already, it seems like they have chosen a new marketing angle for the Amira, and again it’s nothing to do with the images. Having already convinced everyone of the Alexa workflow they are now moving on to look at the area of ergonomics." Pick Up > Shoot" is the new tagline. Arri want to get across that the cameras is going to be easy to work with and ready to go. No long boot up times and no creating of “rigs" in a rather desperate attempt to make some odd looking box fit onto human shoulders.
Of course it has turned out to not actually be Pick > Up Shoot. While the camera does come with the viewfinder, it doesn’t come with a lens mount, shoulder mount or battery interface which all have to be bought as extras in spite of the misleading press release on launch. So you do still have to rig it up, just not to such a crazy extent as we have seen of cameras lately.

The odd thing about this focus on ergonomics, is that it makes me go back and look again at the Sony F5. At the time it was released, I think everyone was quite excited by the fact it looked great which was a bit of a surprise in a world where cameras had become quite ugly looking, but it was also quite well thought out ergonomically too and in some ways has quite a lot in common with the Amira. The Sony F5 wasn’t actually marketed on the basis of its ergonomics however, in fact it first appeared sitting on an aluminium square block! However the appearance of a camera such as the Amira, with a similar form factor, marketed on the basis of ergonomics, makes you ask questions.

The big question relates to the fact that the Sony F5, which only costs €12,190, comes with S-Log as standard and can shoot at 120fps internally. It also shoots on the somewhat familiar SxS cards and can easily be upgraded to record 4K. The Amira starts at €25,980 for a basic camera body without Log-C and shoots on the new CFast2.0 cards. Of course the Sony F5 does not come with a viewfinder as standard like the Amira does but the Amira needs a lens mount at €1020 and a battery mount at €395. So the question is why would you spend twice as much on a camera with far less features, and without an obvious path to 4K?

The answer to that question is all in the sensor. People love the look of the Alexa, and the Amira has the same sensor, so it is the closest way to get the “Alexa look”. It also inherits the Alexa’s ProRes workflow that has proven so popular already and of course the Arri name is itself something that will prove popular with some people. Potentially the camera also brings to the table ways of shooting that might work better on very low budget productions with smaller crews as well. All in all it is likely to appeal to people looking to shoot Alexa on a lower budget.

It may seem a bit odd to pay so much more for a camera just based on a certain kind of look it can achieve if you are focused on the specs, but on the other hand cinematography is all about the look of the finished product so perhaps that makes it a bit more understandable. There is something to be said for choosing a camera based on the look you want to achieve as much as on the technical specifications.

By that same token however, you might want to take a look at the Sony F5 and see if the it has a look that would suit some projects too. It’s great to be in a time where we have such a diversity of choices for “truly cinematic images”.