Did someone wipe the moon landing tapes? 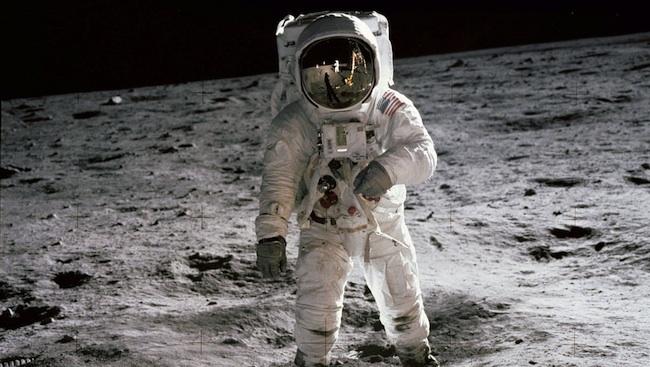 RedShark Replay: On July 20 1969, Neil Armstrong descended the steps of the Lunar Lander and became the first man ever to walk on the surface of the moon. What few people realise though is that the grainy, ghostlike images we all associate with that event were not the best quality ones recorded and that the tapes of that original footage have all disappeared

The whole saga is detailed at length in NASA's report on the subject, 'The Apollo 11 Telemetry Data Recordings: A Final Report', though even it acknowledges that its conclusions are only probable and not necessarily the end of the matter.

But first, we have to rewind over forty years to when humanity stood on the brink of something really rather extraordinary and NASA was on the verge of sending three men to the moon.

Ever since the inception of the Mercury programme, the Agency had been keenly aware of the importance of television in selling its story to the public and keeping its budget, and so there were detailed plans for live televised pictures from the landing. However, there wasn't exactly a lot of bandwidth for them. Voice, telemetry, biomedical data, and television all had to share the same transmission link from an antenna atop the Lunar Module, and television only got allocated 500kHz of the spectrum. Seeing that the commercial television of the time relied on having 4.5MHz at its disposal, there was therefore a bit of a problem.

The solution was to use a special camera mounted inside the door of the module developed by Baltimore's Westinghouse Electric Corporation which used a non­-standard scan format of 10 frames per second and a 320 line resolution, compared with the (then) US television standard of 30 frames per second and 525 lines. And, because commercial television didn't have a hope of being able to transmit that signal, RCA was also hired in turn to build a scan converter, which was then installed in the three tracking stations around the world that were scheduled to accept the live feed, Goldstone in California, Honeysuckle Creek and Parkes in Australia (the latter being where the events of the movie The Dish are played out).

The plan was to convert the signal on site using the RCA box before it was then sent to Mission Control in Houston via a mix of microwave links, communications satellites, and analogue phone landlines depending on exactly where in the world the tracking station was. Meanwhile engineers at the tracking stations would tape the original telemetry, including the video signal, onto one-inch magnetic tapes for backup.

Houston, we have a problem

Only a handful of engineers ever saw that original, unconverted signal on specially adapted monitors. All the footage the rest of the world saw, and will ever see, of that moon landing was recorded from the seriously downgraded broadcast signal. Why?

Each of the three stations used 15 one-inch tape reels to record the actual event, and the engineers dutifully boxed the 45 back-up tapes up and shipped them from their various locations to the Goddard Space Flight Centre in the US. From there, they were sent to the Washington National Records Centre, which is where they disappeared and, despite NASA's best efforts to find them again, they remain stubbornly missing, presumed wiped to this day.

That's not to say that there hasn't been a Herculean effort to try and find them, which over the course of a decade involved hunting high and low across two continents. A retired engineer in Australia reckoned he'd taken a dupe of the actual landing tape, but after a mini saga all of its own which included locating the only machine in existence that could still play the data back, it turned out that he'd made a copy of the wrong tape and it contained just chatter between the astronauts and Houston.

Then there was a hunt through years of documentation and paperwork to try and see exactly where the missing originals had ended up. We are talking tens of thousands of tapes and even more paperwork as a dedicated team of sleuths tried to cross reference numbering systems from one government department with wholly different numbering systems from another.

The history of the hunt reads more like a satire warning of the evils of bureaucracy than anything else, but after a few more years of effort they eventually uncovered the name of the department at the Goddard Space Centre responsible for receiving the tapes (Data Services Section (Code 824.3) if you must know) and the fact that they would have been in a non-standard sized container for magnetic tapes of that period due to being on 14in reels.

They also though started to come across many references to a chronic shortage of one-inch magnetic tape inside NASA in the early 80s, as a couple of satellites (LANDSAT among them) were going through tape at way above the predicted rate. And, coupled with this, was the fact that in 1981 NASA procured 164,220 reels of magnetic tape from its own labyrinthine network of internal organisations to make up for that shortfall.

In other words, around a decade after the last human walked upon the surface of the moon, it looks like the 45 tapes of the original moon landing were degaussed, recertified, and reused to satisfy a NASA-wide shortage of one-inch tapes.

Of course, that particular breed of the lunatic fringe, the moon landing deniers, have had a bit of a field day with all this, but while the original footage has been lost there have been enough scraps lodged in the complex transmission chain used that day to assemble better quality footage of the event than was once thought possible. A copy of the landing footage was made in a Sydney video switching centre before the downlinked signal from Honeysuckle and Parkes was squirted over to the US (with all the additional degradation satellite transmissions suffered back in the last 1960s); a Super 8 film was made of the slow scan monitor display at Honeysuckle Creek; the CBS News Archives found some original tapes; and more kinescope footage (film recordings made from TV pictures) was also found at the Johnson Space Centre.

All these were rounded up and given to Lowry Digital for enhancement before the 40th Anniversary celebrations and on July 16 2009, 15 key enhanced scenes were released to the world's media. According to the very few people who had seen both, they weren't as good as the slow scan 320 line originals, but they were substantially better tha nwhat people hade been viewing for four decades.

For subsequent moon landings, the events of Apollo 11 had revealed to NASA engineers that normal broadcast standards could be supported live from the Lunar surface, so the whole saga is destined never to be repeated. You can only hope though that NASA has somewhat tightened up its media storage policies...