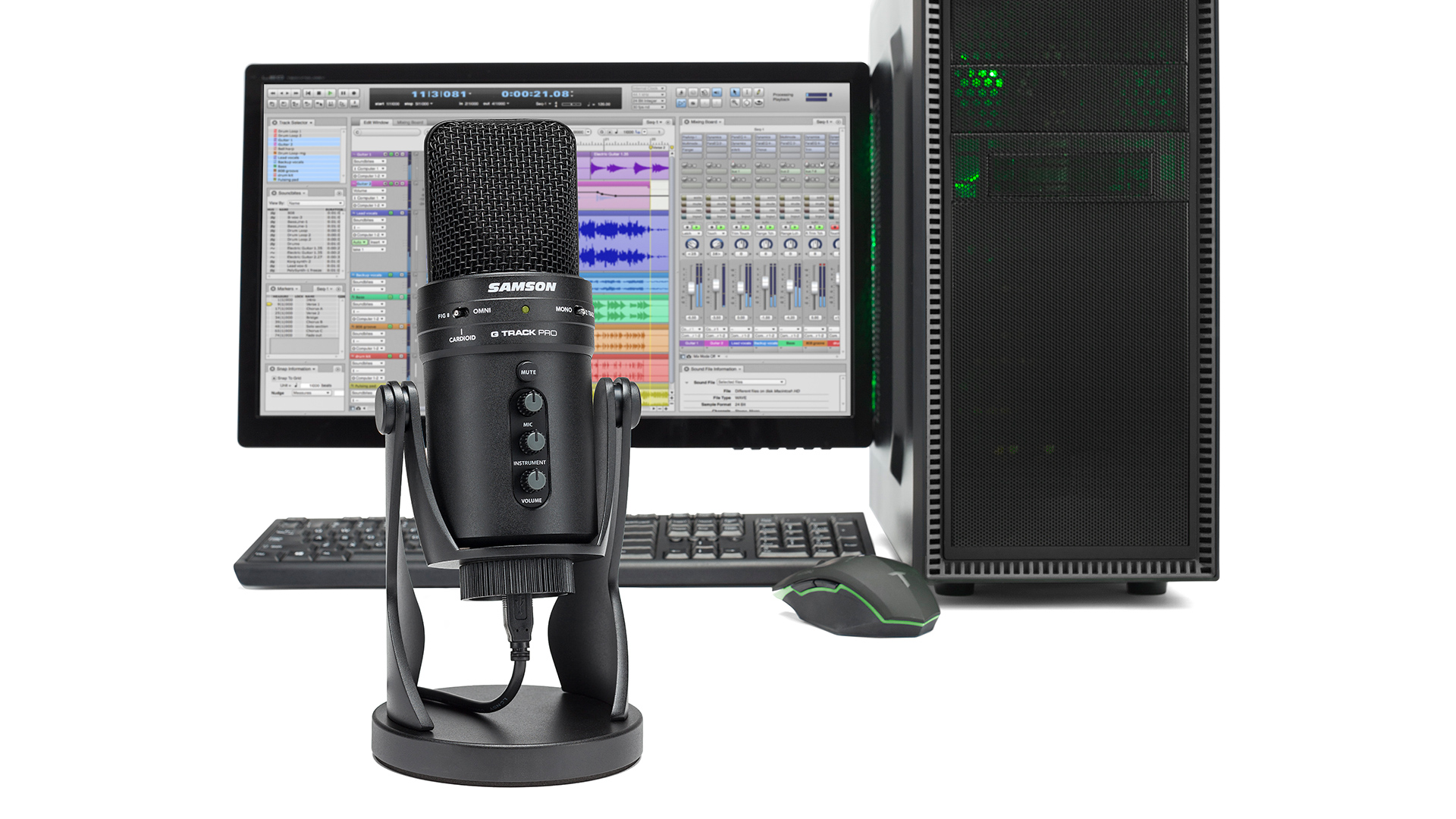 If you’re a video editor in need of a decent voice-over microphone to use with your favourite editing software – Resolve, Final Cut, etc. – but don’t want to break the bank then the Samson G-Track Pro USB mic, at just £179, could be the answer.

Being a USB mic means it has an Audio Interface built in so there’s no need to buy an additional Focusrite for example – simply plug-and-play, the G-Track Pro doesn’t even need any driver installation.

The G-Track Pro is the replacement for the older G-Track model. This new Pro model is much better built – like a WWII hand grenade: solid metal, solid/heavy metal base and a heavy gauge metal mesh cover to protect the dual 1-inch capsule. The switches feel nicer too. This new Pro model comes with a heavy-duty metal desktop stand, a metal mic mount (for use with mic stands) and better recording resolution of up to 24-bit 96 kHz. It sports multiple polar patterns: cardioid (unidirectional to pick up your voice from the front), bidirectional figure of 8 (for mic placement between two people so it picks up both parties equally) and omnidirectional for recording several people sitting around a conference table. 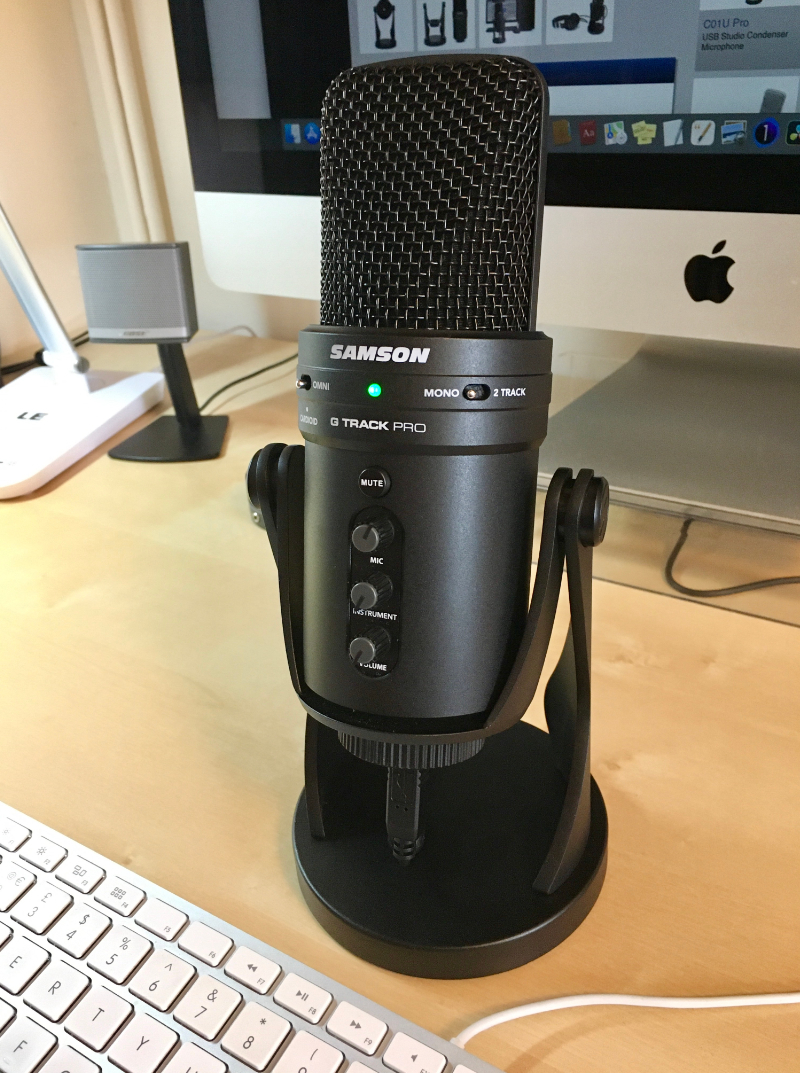 The G-Track Pro is nice and heavy (3.52 lb), which means it won’t slip around your desk. It doesn’t offer any serious shock absorption (a Samson shock mount can be bought separately) other than the rubber on the base of the metal stand, so don’t go slamming cups of coffee down on the desk while recording. The polar pattern switch is nice and clicky and the dials for Mic, Instrument and Volume feel nice. The Mute button, however, does not have enough tactile feedback for my personal liking, but there is a green/orange light for visual feedback.

The ‘Mono/2 Track’ switch simply mixes the Mic and Instrument (when plugging in say a guitar via the 1/4" instrument jack input on back) down to a single track when set to Mono. Switching it to the 2 Track position sends the Mic and Instrument to two separate tracks for easier editing. On the back of the mic there’s a ‘Monitor’ On/Off switch for zero latency monitoring via the 3.5mm headphone jack. 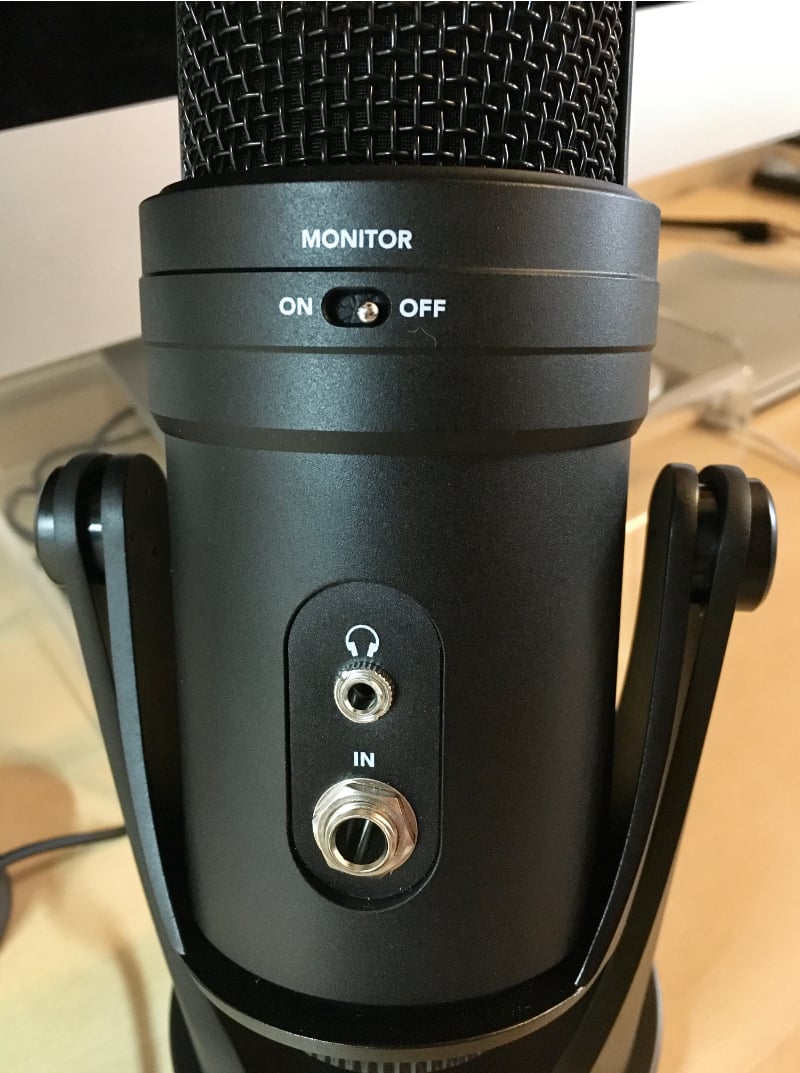 I used to own a Neumann U87 Ai, which cost £2,000, and if you know anything about mics you’ll know the U87 is about as good as it gets for vocal work. I’m not going to pretend that the G-Track Pro is in that ballpark but boy, for the money, it’s an impressive microphone. 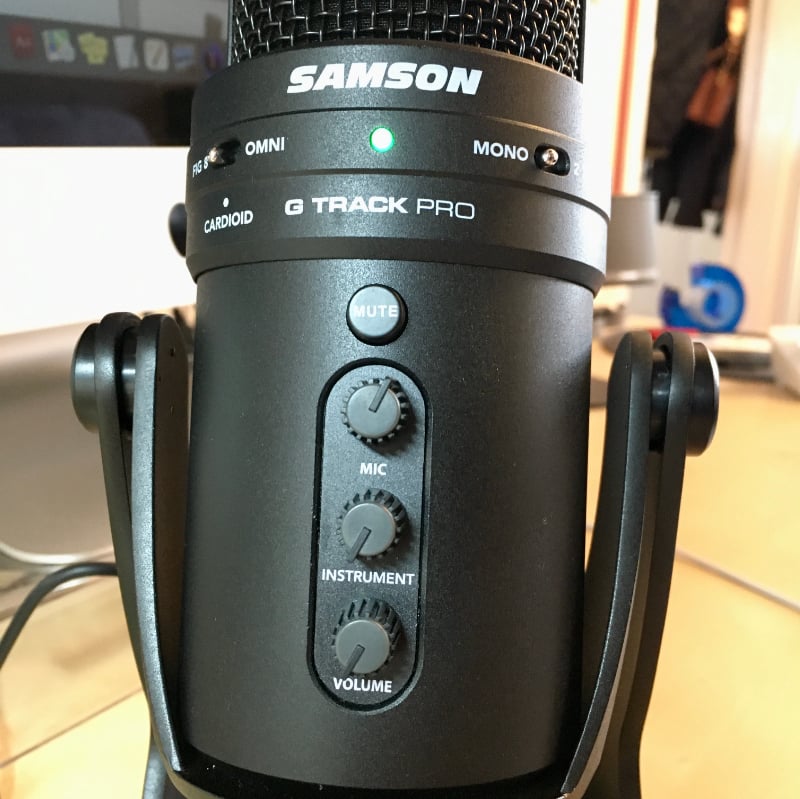 Using the G-Track Pro in the cardioid polar pattern for voice-over work in DaVinci Resolve I found my vocals to be full with nice rounded bass, clear mids and a crisp top end. Moving my mouth from about an inch to six inches away from the mic changed the characteristics, as it does with most mics. As I moved further away from the mic the bass dropped off and ambient room tone became more evident.

For me, I preferred the vocal quality when my mouth was about 3 or 4 inches from the mic in cardioid pattern, which yielded a nice radio DJ quality with good bass. 4 to 6 inches also produced a sonic quality to my liking. However, when speaking extremely close to the mic you’ll benefit from a pop filter. The Samson PS04 or PS05 are both under £20 and, being dual layered, do a super job of eliminating pops and sibilance. Samson also make a dedicated pop filter for the G-Track Pro but that clips on just below the SAMSON logo on the mic, but for some reason it’s only a single layer design so it does not work as effectively as the PS04 and PS05 filters. The latter two, however, can be a faff to fit to the included metal stand. 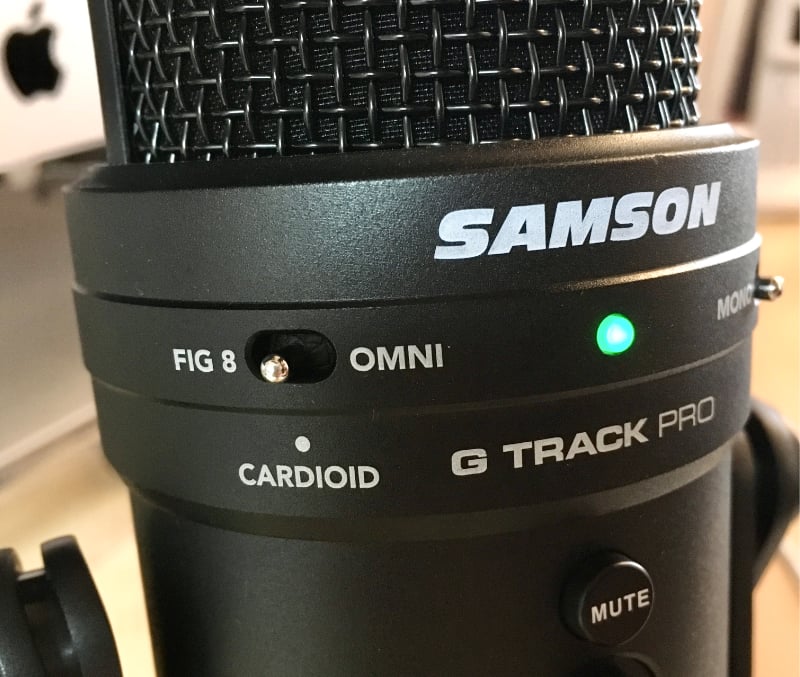 Using the mic in Figure 8 (bi-directional) worked great when I placed the G-Track Pro on a table between myself and an interviewee sitting directly opposite. With the mic placed about 24 inches away from both parties mouths the G-Track Pro did an excellent job of picking up both at equal levels. Remember, the bidirectional pattern only picks up from the front and back of the mic, while rejecting sound from the sides so make sure the mic is positioned square on to both people.

The omnidirectional pattern is ideal for conferences of several people sitting around a table as this pattern picks up from the front, back and both sides of the mic i.e. all around. The omnidirectional pattern produces decent enough results for conferences but you’ll have to turn the Mic gain up and switch off that air conditioning if the table is large and people are more than a meter away. 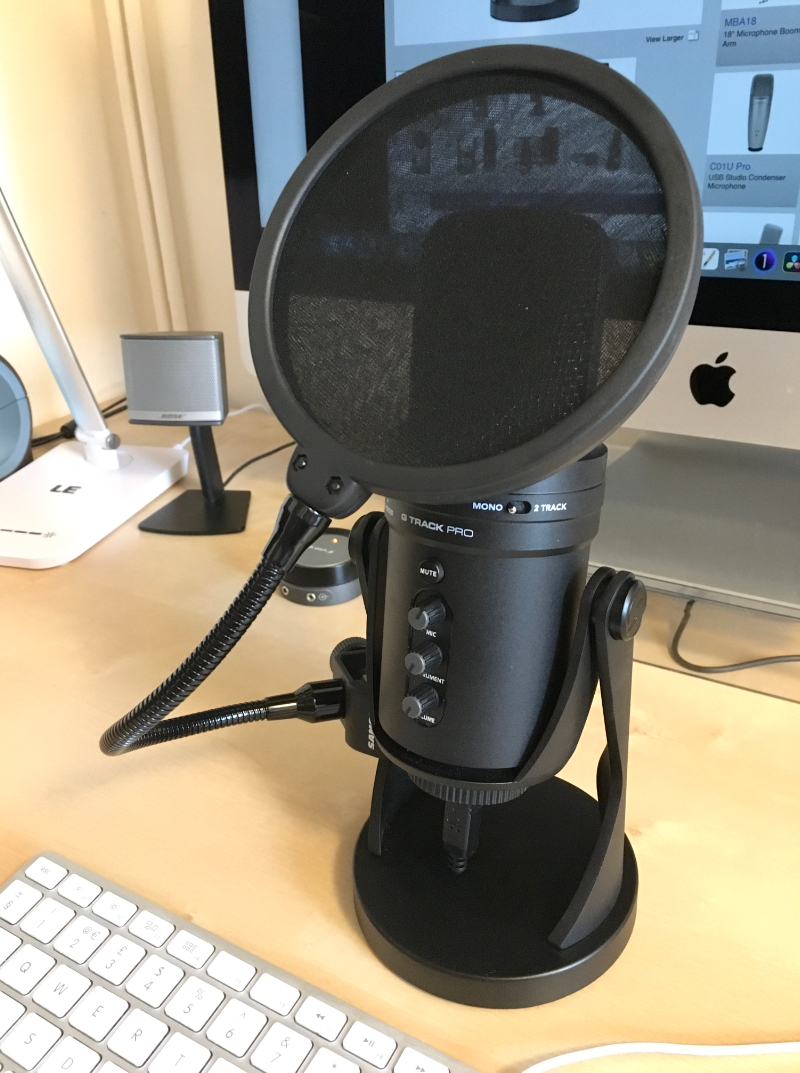 The G-Track Pro is an excellent quality mic with good all round performance. The only slight negative I did find was that the G-Track Pro isn’t the best for background noise rejection but it’s no worse than any other mic I’ve tried in this price range. Besides, most editing software (DaVinci Resolve and Final Cut for example) have good built-in background noise removal tools for getting rid of unwanted room tone, fan noise, a buzzing fridge, and it only requires a few mouse clicks. Also, the bidirectional and omnidirectional polar patterns loose a little bit of frequency response compared to the cardioid pattern. But given most other USB mics in this price range only come with a unidirectional cardioid pattern you can see the other two as a bonus anyway and most of us will only ever use the cardioid pattern anyway for most of our work.

With the G-Track Pro you’re getting an excellent quality mic, especially in cardioid unidirectional pattern, that’s well suited for voice-over work. At the price, I highly recommend it.