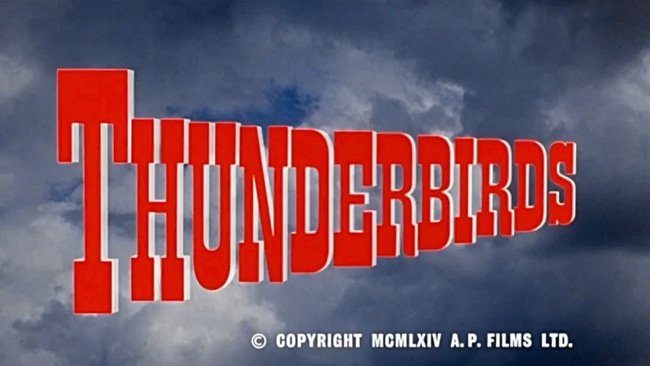 Recently at Red Shark Towers a friend sent us a link to an HD scan of the title sequence from the iconic UK children's TV series, Thunderbirds. Proving that smooth CGI and eye-popping VFX isn't always necessary, this show has obsessed generations in the UK, despite the fact that it was essentially a puppet show with a few explosions in.

Thunderbirds creator Gerry Anderson famously didn't want to make a puppet show, but in the mid 1960s if you didn't have access to blockbuster feature film budgets, the only way you could realise your vision was via animation...or puppets. Thunderbirds was the fourth such show his production company made (Supercar, Fireball XL5 and Stingray proceeded it), was astonishingly expensive despite being comprised of puppets and models, and pioneered enough effects work that supervisor Derek Meddings eventually went on to be involved with the Superman films and reportedly Kubrick even hired some of the Thunderbirds technicians to work on 2001: A Space Odyssey.

Seen from nearly 50 years in the future, it all looks all a bit basic. Despite the technical advances - Anderson's team developed a technique to sync puppet mouth movements with dialogue which he grandly titled SUPERMARIONATION, and the rolling road used to suggest movement of the models was ground-breaking - it definitely looks like what it is: a bunch of puppets walking around model sets.

The key thing though is that it doesn't matter. What matters is the fact that with some wonderful design (the physics-defying Thunderbird 2 is a perennial favourite), some bravura set-pieces such as the intricate launch sequences of the Thunderbird vehicles, proper direction and (mostly) decent scripts, Anderson created something which tapped straight into his audience's inner geek. You knew it wasn't real, even as a child, but then it was never pretending to be, and part of the enjoyment of watching was revelling in the craft of the model makers that made the sets and vehicles the puppet Tracy brothers variously inhabited and piloted. And that fact that it worked again and again through successive generations is testament to exactly how well they all did it.

Anderson died in December 2012, having revealed in an interview before his death that a new series was on the way but he was under NDA and couldn't talk about it. Several months later ITV Studios and New Zealand's Pukeko Pictures announced that they were going to break the thread that stretched back to 1965 and co-produce a new 26x30 series for CITV with CG provided by the slightly famous Weta Workshop. It's not the first reimagining, there was even a largely indifferent movie based on the series released in 2004, but it is the one that has gained most attention.

"This re-invention of Gerry and Sylvia Anderson's iconic series will be produced using a unique mix of CGI animation and live-action model sets," said a statement. "Showcasing Pukeko Pictures’ and Weta Workshop’s ground-breaking creative and technical excellence, it will deliver a whole new level of action-adventure animation for today's audience, whilst also affectionately paying tribute to the legacy of model locations from the classic series."

Will it be as good? Largely that depends on the scripts. Certainly there's scope for it being technically rather interesting, especially given Weta's track record of using mocap to drive animation (which is the main theory regarding that slightly obscure 'live-action model sets' phrase). But as the original proves, it's not all about photorealism and VFX, it's about a slightly more difficult to quantify sense of excitement and wonder that can last for decades.

And they'll mess with Thunderbird 2 at their peril...

Here's the HD scan of the opening sequence. It's a pity they didn't correct the chronic "wow" in the audio!