Here's our first impressions of the GoPro Hero 8 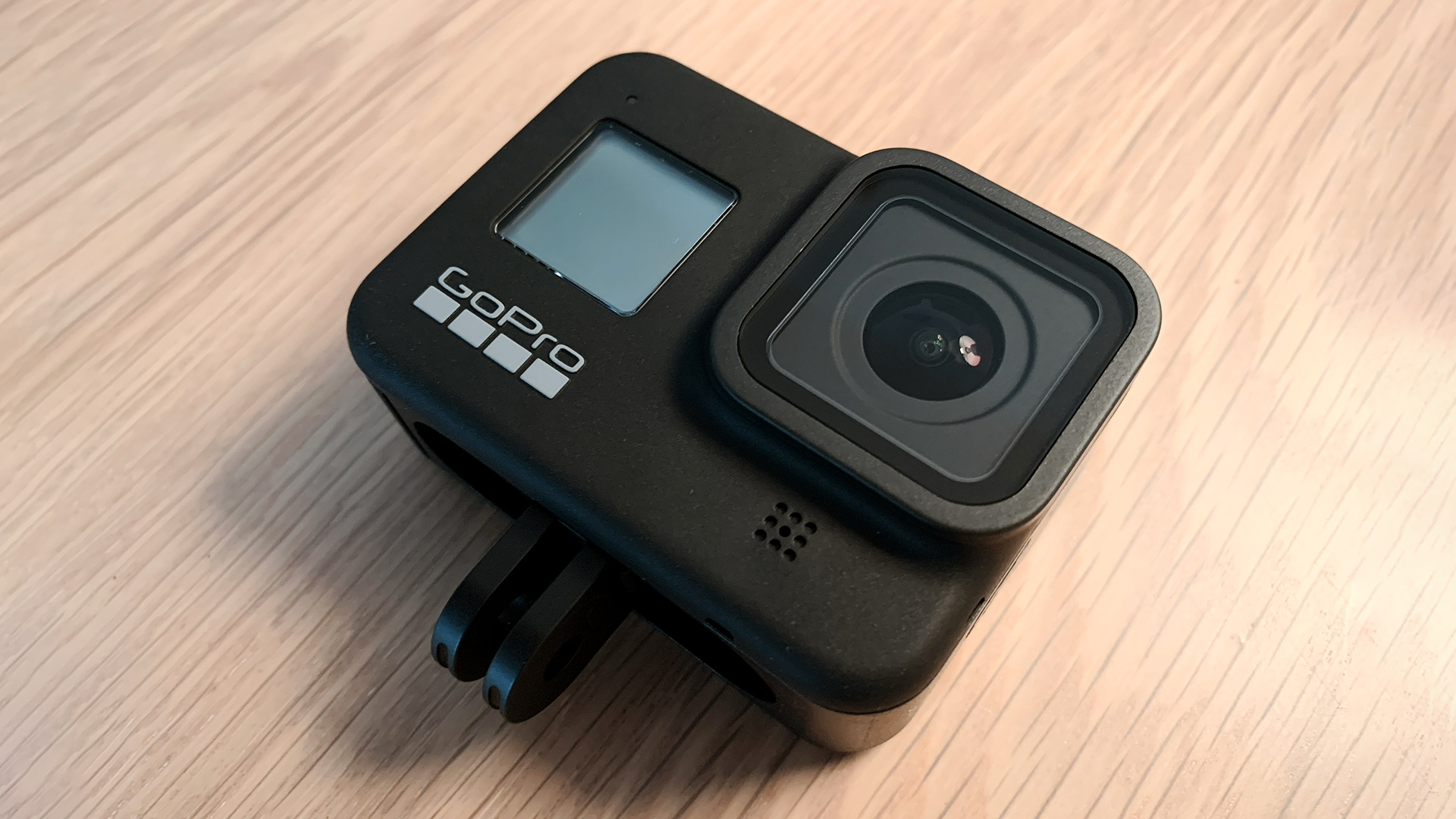 We've finally got our hands on a GoPro Hero 8, and here's our first impressions of the latest iteration of the iconic action camera.

It's no secret that in recent years GoPro has been going through a turmultous period, with staff layoffs and a sense amongst users that the company had lost its way. But the company bounced back last year with the release of the Hero 7 Black, which introduced features such as Hypersmooth, practically revolutionising in-camera stabilisation with the system that really did give almost gimbal like results, without a gimbal.

This year the anticipation was high for its successor, and while the new camera may not be revolutionary, it is certainly evolutionary, and that's a very good thing. The Hero 7 was already a really very good camera,and so it was difficult to see what, precisely, GoPro could reasonably do that would fit the term revolutionary. In the end it really just needed to make things even better. Just how much better I'll be finding out when I test it out for my main review of it. But for now here's my unboxing of the device and my first impressions.

The Hero 8 comes in the now trademark GoPro box. A transparent cover showing the camera off on its mount, with an accessories box contained beneath. I've always been a bit of a clumsy fool opening these, and so it has taken me until this 8th iteration to realise that the company provides a very handy pull tab on the bottom of the package so that you can easily open it up without making it look like it has been savaged by hungry lions. 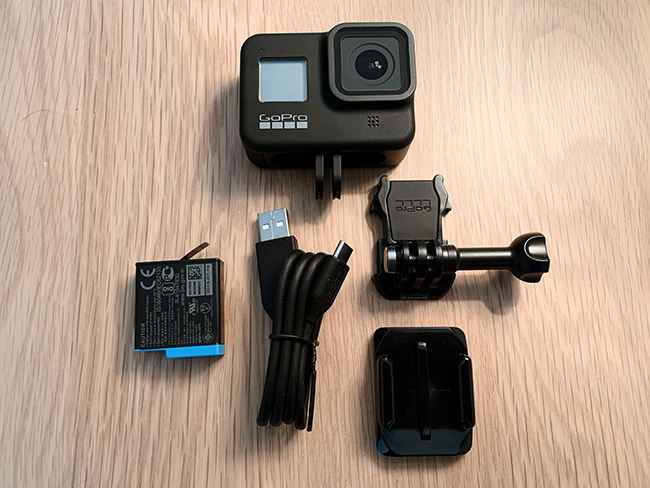 The accessories that come with the GoPro Hero 8

Within this lower box you will find four very simple accessories. The all essential battery, which is pretty much the same as the Hero 6/7 battery bar the stylish blue flash, a USB charging cable, and a curved sticky mount. GoPro used to supply a curved and a flat mount, but it seems this has now stopped. The curved mount is generally the most widely used, being mountable to helmets. Although a flat mount would have been very useful for many other purposes.

The familiar mounting clip is already holding the camera in the box, so this can be removed, and the camera unscrewed from it for further inspection.

The all new flip out mount holes. Pretty sturdy feeling, and replaceable.

At a glance the Hero 8 looks just like its previous three predecessors. In fact it is a completely new design, and my feeling, at least initially, is that this is for the better. The Hero 8 no longer needs to be mounted inside a frame. One of the big advances of the Hero 5 was that it removed the need for the old style transparent waterproof housing, at least for shallow immersion up to 10m. This had the very beneficial advantage of making the camera far less bulky in use, and also helped minimise the steaming up of the lens during water sports. A huge issue with the older models.

Without the frame, the Hero 6 body is smaller than the Hero 8

In ready to use configuration however, the Hero 8 is much less bulky.

With the Hero 8 the company has gone one further and completely removed the need for the frame. Whilst the Hero 8 body is ever so slightly bigger than the 5/6/7, once it is in a usable configuration it is much smaller. GoPro has got around the need for a frame by incorporating the mounting holes in some flip out 'feet'.

Now, this does also bring some disadvantages. The first is that the lens cover (the square glass you see on it is a protector, not the main camera lens, which is housed behind it) would appear to be no longer replaceable. So you'll need to take more care with this one. I'm going to be using a Hero 8 tempered glass protector, much like a smartphone screen protector. It also begs the question of what happens if the feet snap? My understanding is that these are in fact replaceable parts. 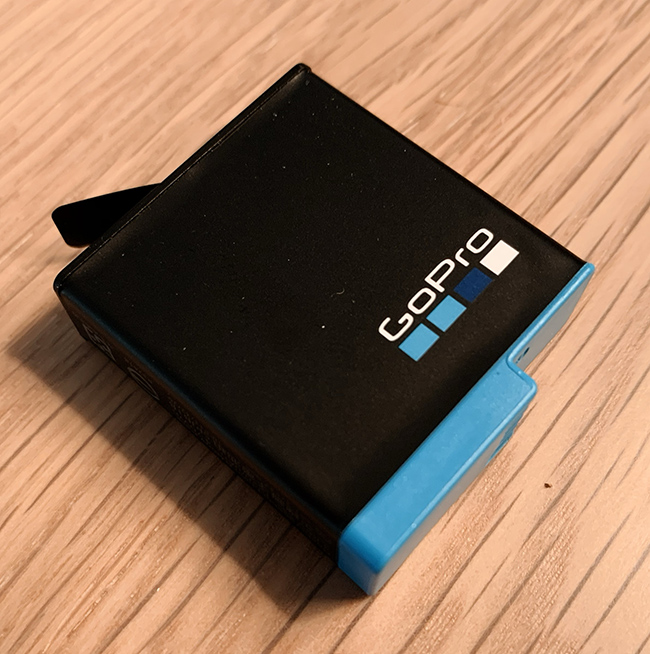 The new Hero 8 battery. Basically the same as the previous one, but with a stylish blue flash.

A big advantage of the new design is that you no longer have to faff around removing the camera from the frame in order to replace the SD card or battery. Simply opening the side door suffices.

The Hero 8 has a slightly rubberised feeling front, with texture dark grey/black main body. A big, very solid feeling side door reveals the battery, SD, and USB compartment. This door is also removable, which is needed to fit the forthcoming Media Mod, which gives the camera extra capabilities such as HDMI out, external mics, and video lights. 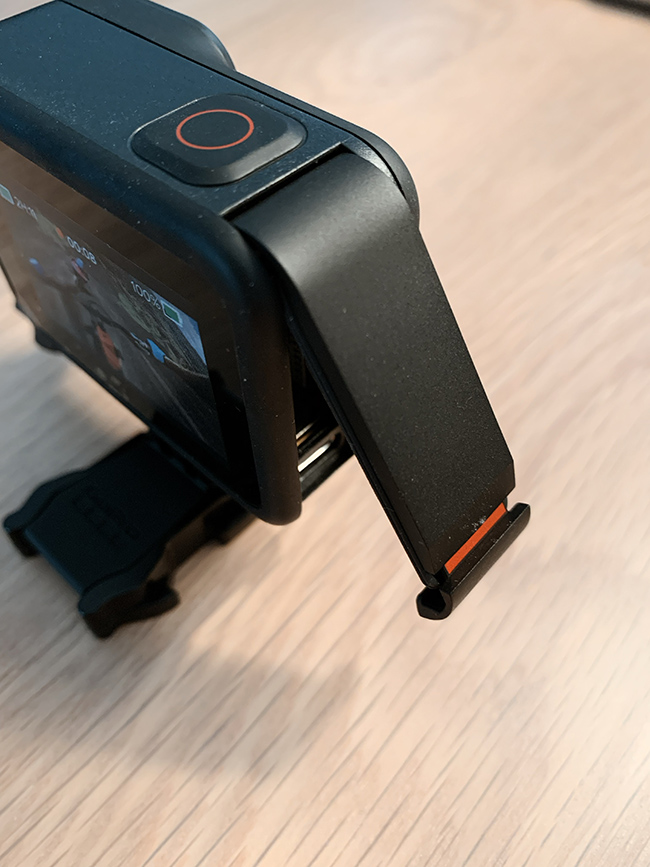 The chunky side door that opens to reveal the battery compartment below. 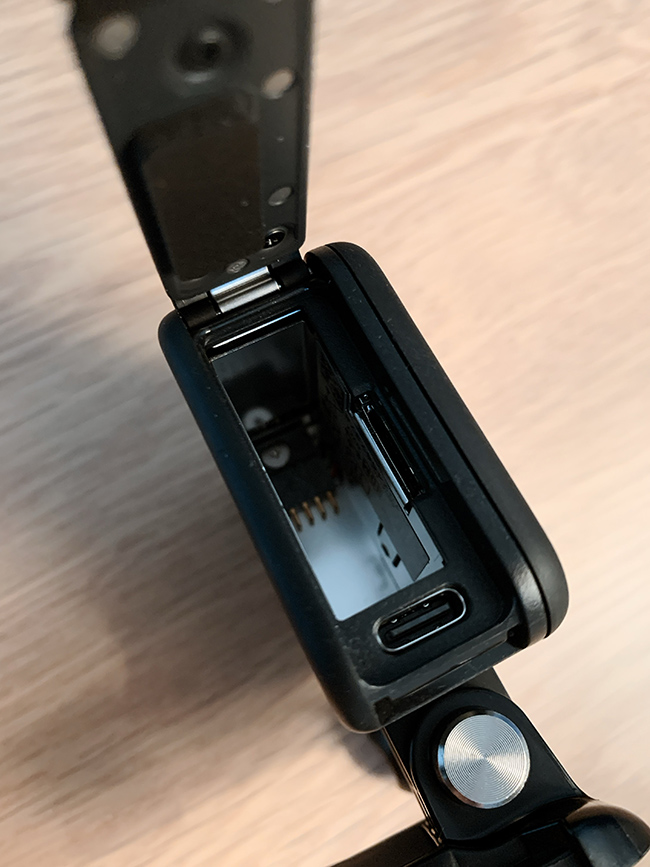 Button layout is generally the same as the older cameras. The user interface has been redesigned to make the different modes easier and quicker to access, but I'll be covering this and much more in more detail in my full review, coming very soon.