It wasn't expected at all, but it's here and it's real. 6K BRAW in Pocket Cinema Camera form. Here's the full lowdown on Blackmagic's new baby.

This article contains direct links to our retail partner, Adorama, which already has the new camera in stock.

Okay, part of me would have liked the banana yellow BMPCC4K to have made an appearance, but perhaps Grant Petty is waiting until IBC for that one. What we did get was just as unexpected however. A Pocket Cinema Camera that records 6K footage in BRAW format. We covered this announcement as it happened.

Now, it has to be said that the original BMPCC4K sold in quantities that must have taken even Blackmagic Design by surprise. Grant Petty apologised for the delays, and anyone who currently has the 4K camera on order will be given a chance to swap to the new 6K version.

What happens to the 4K camera?

The 4K version of the BMPCC is still staying a current camera. There's a big price difference between the old and the new version. Whilst the 4K version retails at $1295 the new 6K variation will cost $2495. So in many respects it is an entirely new tier of BMPCC.

The BMPCC 6K has a much large lens turret compared to the 4K, as you'd expect

With a higher resolution sensor this extra size is needed, but for filmmakers the other benefits are obvious, such as shallower depth of field, and due to the native EF mount, there's no longer any need for a Speed Booster in order to use none M43 style lenses.

Superficially the new camera looks almost identical to the 4K model, save for a much larger lens turret that juts out much further than previously. Apart from that the 6K BMPCC retains the same form factor and controls as the former version. This goes right down to the E6 style battery that is used to power it. 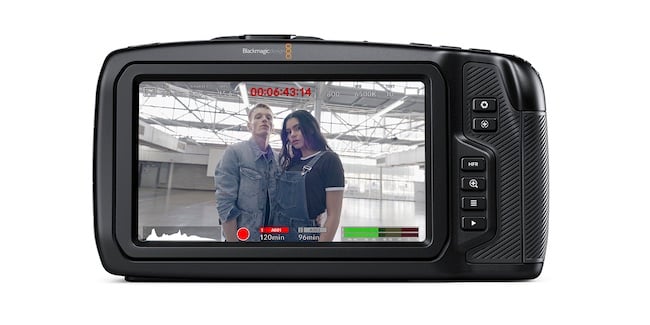 Superficially it's hard to tell the two models apart. Much of the design has been kept the same for familiarity and accessory compatibility.

The BMPCC 6k generally retains most of the same performance specifications as the 4K. A dual native ISO sensor that goes up to ISO25600 is the same, as is the 13-stop dynamic range rating. It is likely that the two cameras might be utilising the same silicon for both sensor types.

Where there is a divergence is when it comes to frame rates. I'm afraid the 6K does not feature any more ultra high frame rates over the 4K model. However it can perform most of the same frame rates as the 4K model, but at higher resolution, even though it still needs to window the sensor.

For example it can record up to 50fps using the full available 6K resolution. This can be increased to 60fps by windowing the sensor to a 2.4:1 aspect ratio, or reducing the resolution to 5.7K with a 17:9 aspect. 4K resolutions can be recorded up to 60fps with no windowing. 120fps is where things become interesting. The 4K BMPCC lost quite a lot of resolution when recording at 120fps because it had to window the sensor, even at HD resolutions. The 6K model still has to window, but it can record the footage at 2.8K resolution with a 17:9 aspect ratio. Lastly, it's now possible to record true anamorphic footage, using anamorphic lenses, at 3.7K resolution at up to 60fps.

The last big difference with the new camera is the resolution of the stills it takes. Don't be under any illusions, the BMPCC6K will not replace your stills camera. Just like the 4K model before it, the new device only has a single stills button on it, with no other functionality such as high speed shooting, flash synch etc. It is purely designed to take reference shots on set. Only this time they can be taken at 21.2MP compared to 8MP on the 4K.

The BMPCC 6K would appear to address the main requested features users have been demanding. Namely the larger sensor as a prominent one. The extra resolution will come in useful for cropping and zooming for sure, but for me the most interesting part of it is that it has allowed for higher resolution HFR abilities.

For documentary and wildlife work the 4K model may well still be the model to go for. If you shoot action sports the decision is more tricky because that higher resolution 120fps mode is very tempting indeed! For fictional work, though, I think the decision is obvious. The 6K model all the way. What's great is that you can easily own both cameras because any accessories you have bought for one should work on the other.

Look out for our review of the BMPCC 6K very soon! Meanwhile, the camera is available to purchase immediately.