Small or large cameras: How does the cost add up 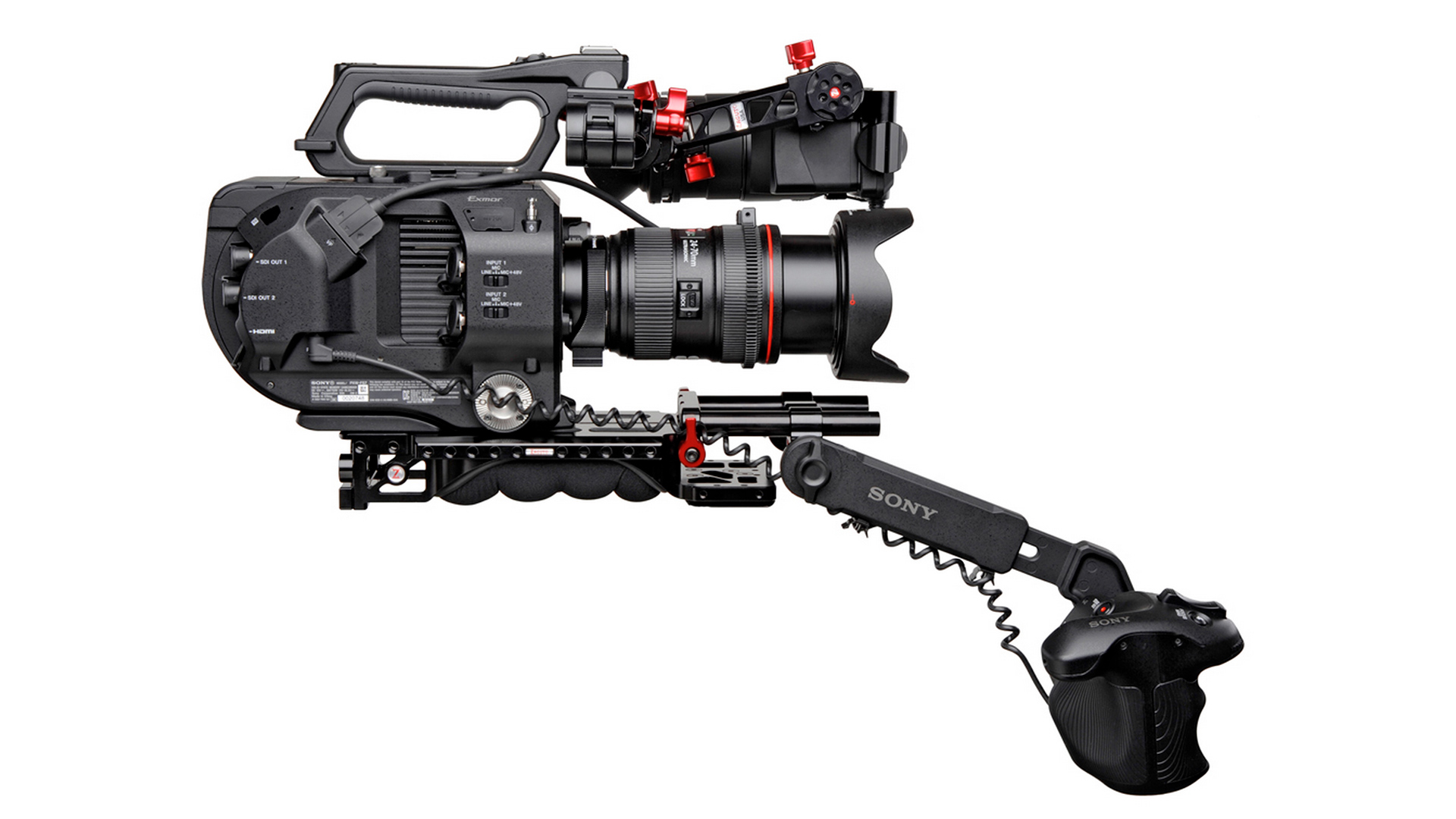 That nice big new shiny camera looks like a great thing to buy, but is it suitable for what you want, and have you thought about the true cost of it?

For anyone starting out and who is reading a forum populated by veteran camera operators (read old fogeys), you really could be forgiven for thinking that the only type of video to be taken seriously with is one that you can balance on your shoulder, or a cinema camera with a thwacking great matte box hanging off the front.

Let's take a mid-sized cinema camera, something like an FS7 or even an FS5. These are two ubiquitous devices, and both produce amazing results in the right hands. But if you want to own one for day to day work, and be prepared for pretty much any situation, there's a lot more than just the camera to think about. 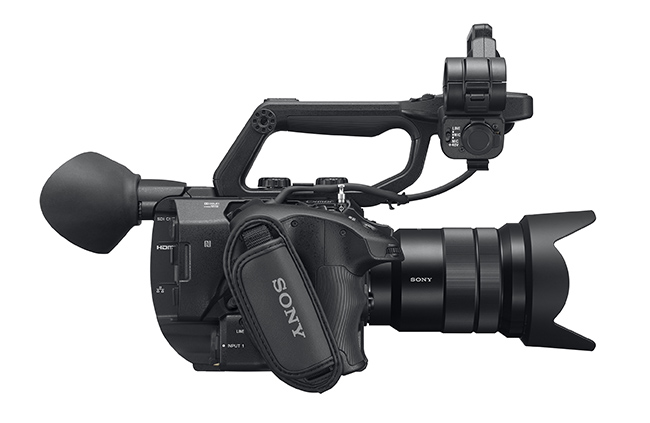 The bigger it is, the more it costs, not just for the camera

The bigger the camera, the bigger the third party accessories need to be. And you can't just think about the bare weight of the camera body plus lens either, because it might be that you need to hang other things off it. More weight means you need a bigger tripod. A bigger tripod means more weight to carry around, and it also means, you've guessed it, a bigger price tag, which for heavier cameras could run into the thousands. They can be a good investment though. My Miller DS25 system, which I bought in 2004, is still going strong, and still a very good tripod. It doesn't have the bells and whistles of more modern products, but it's very smooth and works. But it cost me £2500 for the privilege. It's overkill for a BMPCC 4K.

This extends to other support accessories as well. Want to learn Steadicam or to use a gimbal? Again you need bigger and more pricey devices to support that nice looking camera. Batteries too can become more expensive as the power draw of the camera goes up. You could very easily spend over £1k on batteries and charger alone for some systems, especially if the camera is powered by V-lock types, such as the Ursa Mini.

Have you considered viewfinders and monitors? Some cameras now require an external monitor/recorder to get the absolute best they are capable of. The included monitors on some cameras leaves a lot to be desired and you may be left with no choice but to invest in something external.

Recording media is another big issue. If your proposed camera records to XQD cards, be prepared to make a considerable outlay on storage. A 64GB card will set you back around £140, but you'll need a lot more than that to get you through some days, depending on the resolution and codec settings you will be using. Remember, you need enough storage to be safe, not just enough to scrape through any given day! Even fast new generation SD cards required by the latest gen of cameras will set you back a considerable sum.

But small cameras need a lot of rigging don't they?

Let's suppose that you start out with a much smaller mirrorless camera instead. It is true that you will need some rigging to get it to work day to day, but you can minimise some of this with your camera choice. For example, if you choose one with a good quality flip out monitor you can reduce the need for an external one, at least until you can justify it. A set of batteries will generally be cheaper as well.

Even with some additional accessories to make it work for professional application, a camera such as the GH5, especially if you find one on the used market, is still going to be much less outlay than one of the many larger 'cinema' cameras fully kitted out.

The other thing to ask is whether you really need a large chip camera? Honestly? Would a camera like the Sony PXW-Z90 with a one inch chip be better for you? It's small and really mobile, and batteries last forever on it. It has XLR audio built in, ND filters, extremely impressive slow motion abilities, log and HLG recording, and a large, easy to see LCD screen. Best of all its one inch CMOS chip means that you still have creative control over depth of field, and it still has some of that creamy smooth 'cinema' feel to the images, so it doesn't look like you've shot stuff with a cheap video camera. Oh, and you can mount an XLR mic onto its built in mic holder, too.

Large chip cameras also need a variety of different, and often expensive, lenses to be able to cope with a wide range of situations. Something that won't trouble you with a camcorder like the Z90. 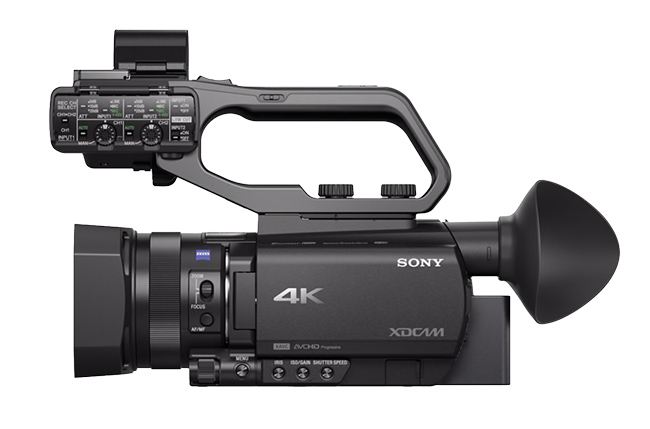 Sony's PXW-Z90 may not have the sexiness of the larger cameras. But it might do everything you need it for, and more.

What's the trade off?

With a small mirrorless camera you do make trade offs versus something like an FS7 or an URSA. This can't be avoided. They aren't as practical for handheld work, they generally aren't as robust as a large camera, and depending on the camera you own you might need to record external audio, even for interviews. Although with the latest cameras some of these issues have been addressed with optional audio modules or built in XLR sockets. Some cameras may have restricted recording length too for single clips and so aren't as suitable for long marathon interviews. Although, as noted above, you will have none of these restrictions with a camera like the PXW-Z90.

The plus side is that you can built up more variation for your kit. You can get a lightweight gimbal, you can buy more important things like light setups and lenses, and maybe even external monitor/recorders. Accessories that will last you across multiple cameras as you develop and upgrade.

The really important thing to remember when you are starting out is to be really honest with yourself about what you need and will work for you, rather than what you want from an emotional perspective. It will pay dividends further down the line.