The three new XA series camcorders, the XA55, XA50, and XA40 are aimed squarely at the professional market, for uses such as lightweight news gathering, documentary making, and corporate production.

The XA50 and 55 models are both very similar, and feature 1" CMOS sensors, making them ideal for more creative uses while minimising the 'camcorder look'.  The XA40 on the other hand features a smaller 1/2.3" sensor. The main difference between the 50 and the 55 is the addition of 3G-SDI connectivity on the XA55. 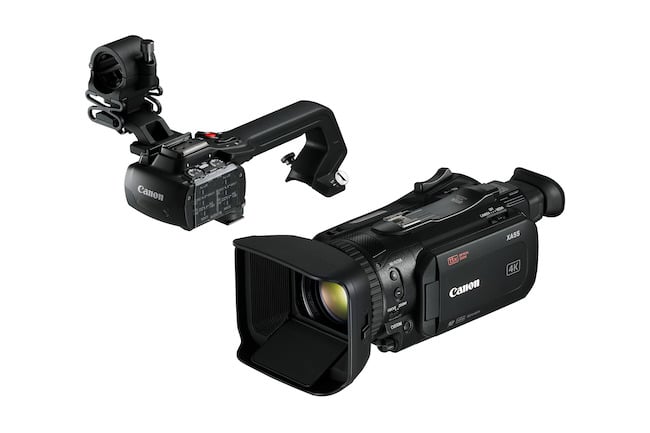 Both the XA50 and 55 feature 15x zoom lenses, giving a focal length of 25.5mm all the way through to 383.5mm at the long end, making for a pretty whopping amount of versaility. Naturally Dual Pixel AF and facial tracking also features along with 5-axis image stabilisation.

The cameras all record to SD cards in either XF-AVC or MP4 formats up to 25/30p (depending on your territory). Slow and fast motion is also catered for up to a maximum speed of 1200x in 4K and HD modes, although we would expect a sizable hit in resolution at such high speeds.

Usefully the cameras are equipped with dual SD card slots allowing simultaneous backup recording, or relay recording should you choose to. Battery power is specified at around 2hrs of continuous recording. Audio is taken care of via two XLR inputs, while the 3G-SDI port on the XA55 allows the output of 10-bit 4:2:2 footage to an external recorder.

The XA40 is claimed to be one of the smallest and lightest 4K camcorders available at approximately 730g in weight. The smaller sensor means that the lens offers a 20x optical zoom with the widest angle being 29.3mm.  The XA40, like its siblings, has two XLR audio inputs, but there is also an additional infrared mode for lowlight shooting.

Second amongst the new announcements are two new LEGRIA camcorders. Both are 4K, naturally, and feature different sensors depending on the model you choose. The HF G50 features 1/2.3" CMOS sensors, while the HF G60 is equipped with a larger 1" sensor, which will make for much more creative control over DOF while gaining the benefits of such a small form factor and all-in-one featureset.

Canon says that both sensors are oversampled. Something we are glad to see becoming pretty much standard now, making for a true 4K image, and potentially better quality than a native 4K sensor could.

The G50 features a 20x zoom lens capable of f/1.8 at the wide end, falling off to f/2.8 on the telephoto side of things. The G50 is very much aimed at novices taking their first 4K images, while the G60 on the other hand falls firmly into enthusiast territory. Dual pixel AF features here, although the lens, due to the larger sensor, is a 15x zoom capable of f/2.8 fully wide, falling off to f/4.5 zoomed in.

Canon says it has placed emphasis on making most controls readily to hand, minimising the need to enter menus, with a smooth lens control ring for manual control over some functions. 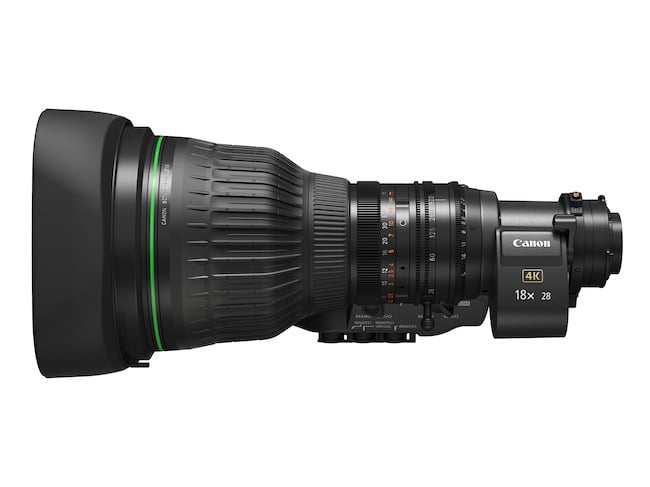 Canon has also been expanding on its 4K broadcast series lenses, designed for 2/3" sensors, the CJ18ex28B and the CJ15ex8.5B.

The former lens offers an 18x zoom ratio, going from 28mm all the way through to 500mm. A built in 2x extender pushes this to 1000mm, which is a pretty long lens by anyone's standards! The CJ15ex8.5B on the other hand features Canon's unique vari-angle Prism (VAP) stabiliser, which uses refractive index liquid between two layers of glass to achieve its aims.

The new firmware will be available from June of this year and supports "streamlined workflow efficiencies" relating to the growing demand for 4K HDR production. The firmware allows the screens to be split to simultaneously display different inputs, along with audio levels for each signal, as well as being able to show waveforms and vectorscopes for each as well.

Such functionality allows direct comparison of HDR and SDR signals, which will help with efficiency during post production.