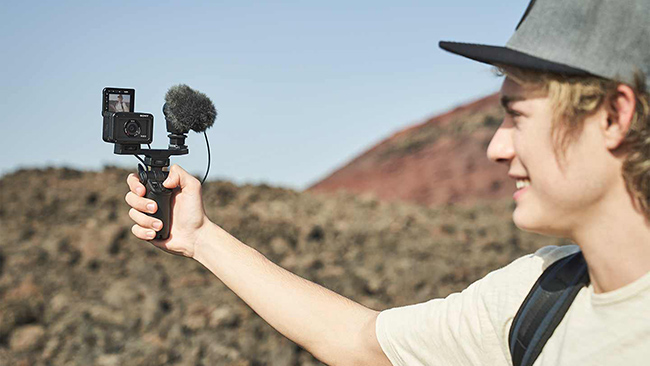 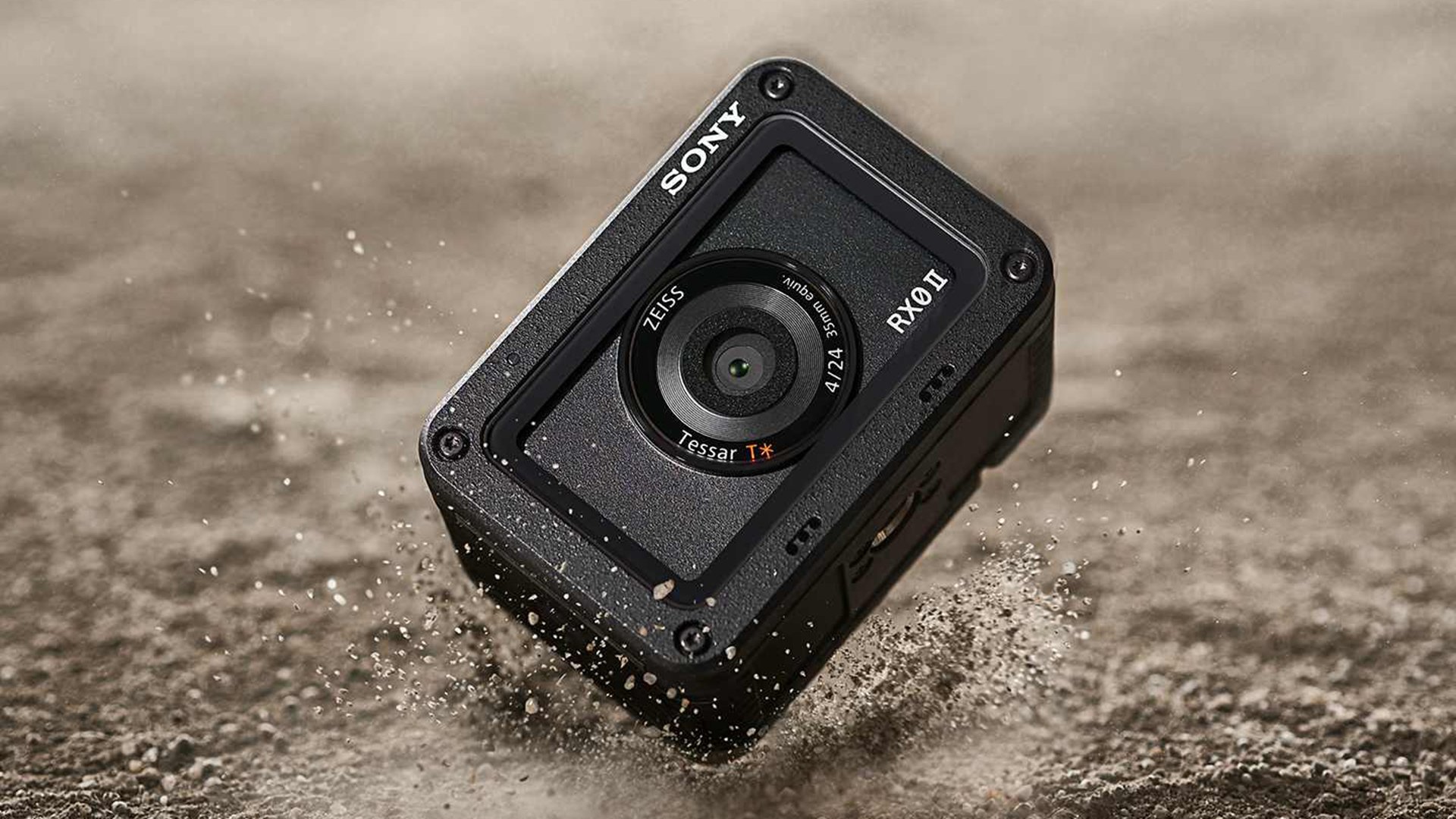 Sony dropped a bombshell today with the announcement of a successor to what could be the best action camera that was never intended to be an action camera. Welcome to the RX0 II. Is this the most versatile and highest quality POV camera yet?

When Sony released the original RX0 camera it was considered a bit of an oddity. It looked like an action camera, and had the general specifications of one, such as the rugged build, fixed lens etc. But it wasn't marketed as such. In fact it was aimed very much at the professional end of the market, requiring as it did an external recorder in order to record 4K.

Today Sony has announced the RX0 II, and it would appear to be a very different beast. For sure it looks very similar to the first camera, almost exactly the same on first inspection, but there are some hugely significant changes, both to the specifications, and to the way it is being marketed. 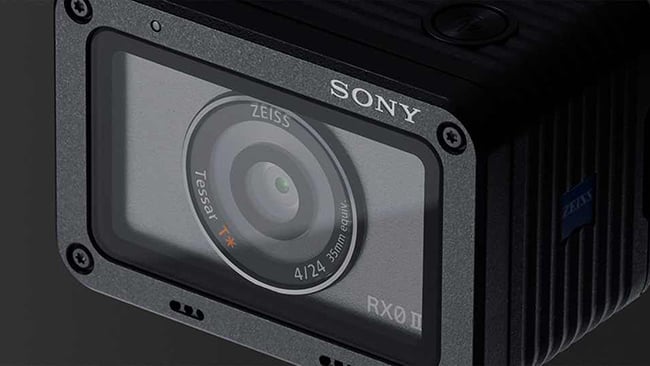 Let's start with some of the technical specs. The RX0 II contains a 1" 15.3MP Exmor RS CMOS sensor. Right off the bat we are talking about a camera that is a cut well above a GoPro, not least because it creates its video image by oversampling, taking the picture from the full sensor area.

The ZEISS lens has a fixed aperture of f/4, comprising 6 elements in 6 groups, and gives an angle of view of 84 degrees. The real beauty of this glass is that unlike most action cameras, the RX0II has absolutely zero distortion. This is definitely a no-fisheye zone.

The camera also features autofocus, including eye detection. There are various options for gaining full control over the picture setup, including various creative picture profile styles. S-log2 also features on the list of options.

The biggest change over the RX0 is that the new camera records 4K 30p internally to XAVC at up to 100Mbps, along with a rather long and confusing list of additional frame rates and resolutions! Suffice to say that high frame rates feature prominently. If you stick to HD then 100/120fps is available to record and playback in realtime, because strangely Sony do not consider 120fps an HFR mode.

For that you need to go up to 250fps, which again is recorded in HD resolution. In fact in HD you can to all the way to the heady heights of 1000fps. Now, this will in all likelihood involve some real resolution loss. But if Sony is using similar methods here to other cameras such as the PXW-Z90, such limitations will only be noticeable on very close inspection. In other words, this looks like being a great camera for slow motion.

Clean HDMI output features for recording to external recorders. Sony hasn't specified specifically whether this is 8-bit or 10-bit. The smart money, is on 10-bit though, since this is what the original camera outputs in 4K with 4:2:2 colour precision. 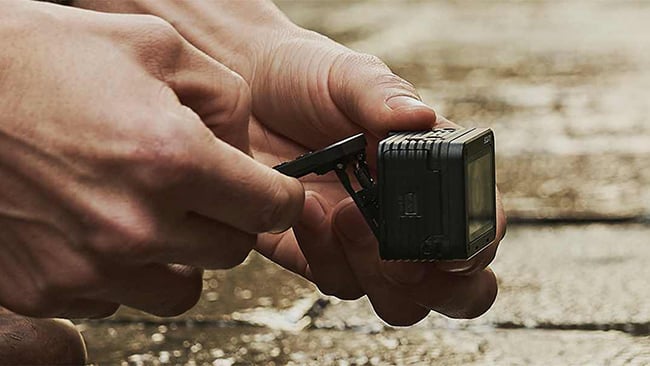 Despite calling it a "premium tiny touch camera", Sony is marketing the RX0 II very much as a lifestyle device. Something that is so small you can take it and use it anywhere. And this includes using it for Vlogging. A use for which has influenced the next big change to the design. The 180 degree flippable LCD display. This is not only useful for taking those low angle shots, but it can be flipped right up so that Vloggers can view the image they are recording. There's even a dedicated mic-in jack.

The camera has a waterproof rating of IPX8, which means it is submersible up to 10m, and has a crushproof rating of 2000N. So while it is being shown up in marketing as a lifestyle camera, one can't help but feel that it would make for an excellent premium action camera.

Interestingly the RX0 II features Clear Image zoom up to 2x, electronically. On paper electronic zooms always sound hideous. But Sony have a track record of managing to create voodoo with Clear Image on its other cameras, so this may actually turn out to be a highly usable function! 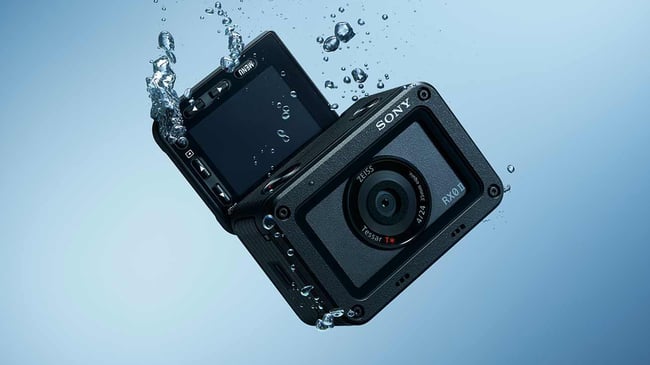 Sony mentions electronic stabilisation, but it appears, although it isn't fully clear, that there are two methods of acheiving this. One in-camera, and another by interpreting gyro metadata from clips in Sony's smartphone app to perform different types of stabilistion. For example keeping a subject in frame, or adjusting the amount of stabilistion applied.

Battery life for video is stated as around 120mins, and it would appear that the battery is swappable. Finally, just like the original camera, the RX0 II features an anti-distortion capability that gets rid of any rolling shutter issues during fast motion when taking stills. 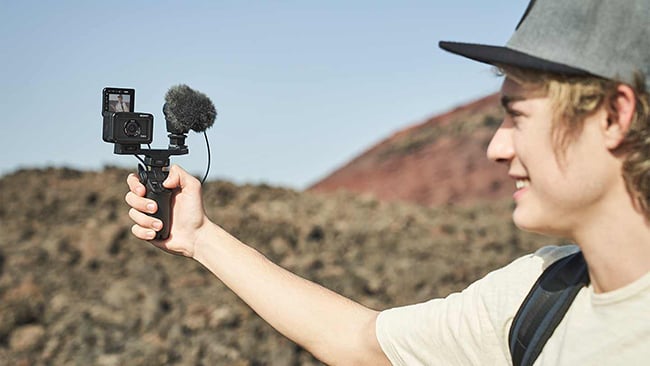 Accessories feature prominantly. A hand grip is available that can control recording functions as well as doubling up as a mini tripod. For more professional users there is an add-on that allows 30.5mm screw on filters to be used.

Price wise, the camera has an RRP of $700, which doesn't exactly make it a budget option. And for those with action camera style uses in mind, it may be too risky. That said, it is built with durability in mind, and for people who are tired of the fish eye distortion of other similar cameras, and who want imagery that is a step up may well be persuaded to give the RX0 II a good look. Personally I think it's a very interesting camera indeed with a very compelling set of features, and as you can see from the video below, the picture coming out of this thing is pretty remarkable for such a small device.

For more information visit the Sony website. Example video from the new camera follows below.