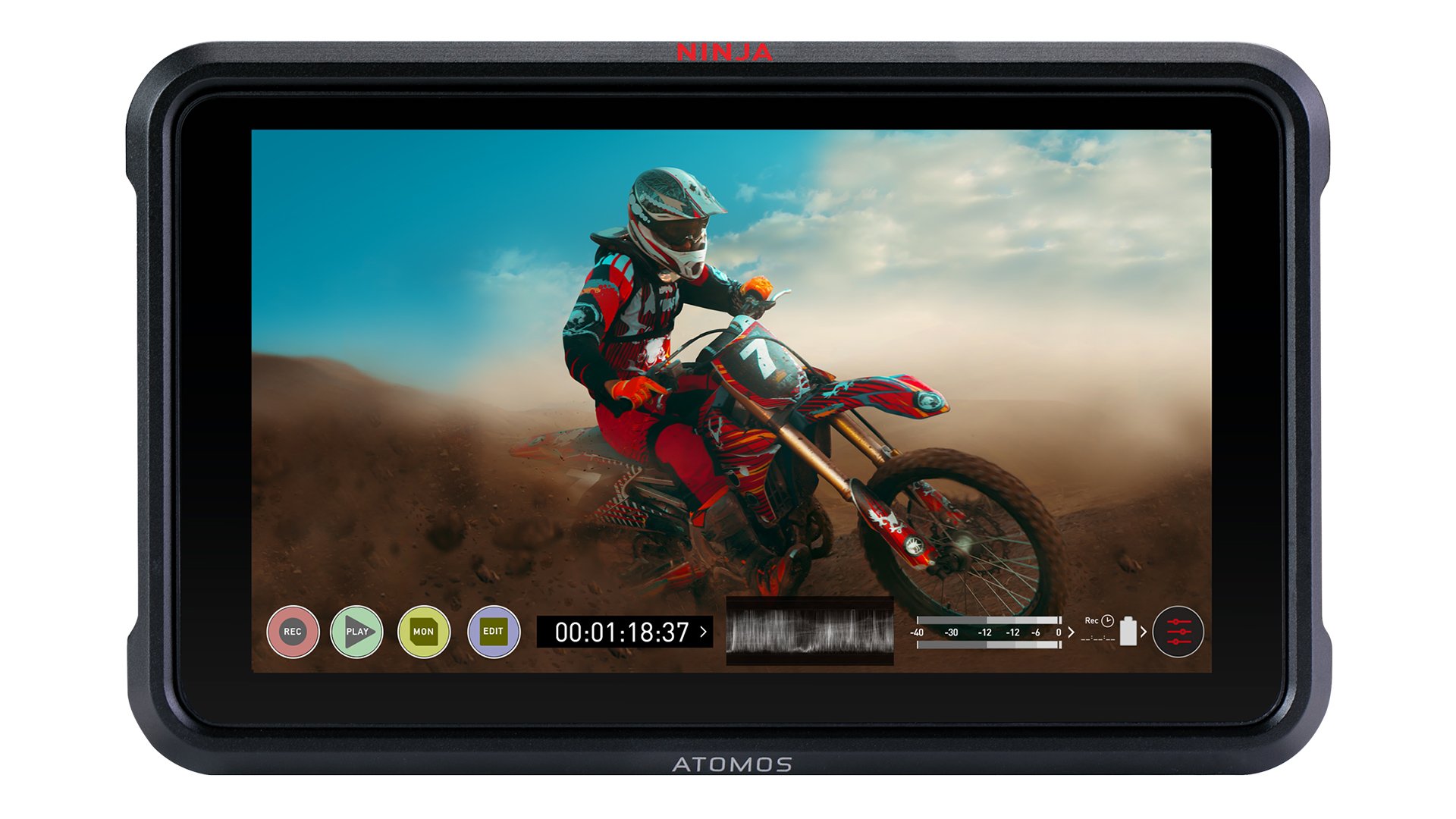 Monitors are one of the best pieces of kit you can have for small camera shooting. We take a good look at one of the most popular devices of late, the Atomos Ninja V monitor/recorder. A system that can expand the capabilities of your camera, and at a very attractive price point.

A few weeks ago I took a look at the new Atomos Shinobi 5" monitor, but until now I had not been able to look at its recorder brother, the Ninja V.

The Ninja V is proving to be a very popular monitoring solution, not only because of its size, but also because from selected cameras it will eventually be able to record ProRes RAW, which clearly gives the little device a lot of versatility. 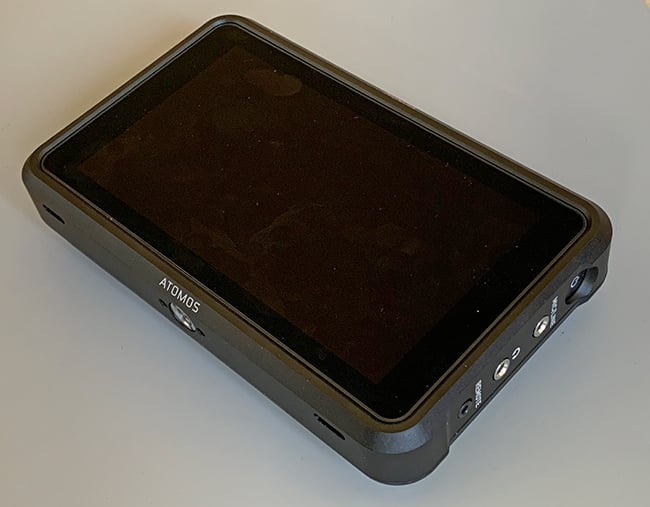 The Ninja V is a monitor/recorder and as a result it is a lot heavier than its more basic sibling, the Shinobi. The Ninja V is a nicely built piece of kit, as we've come to expect of Atomos. It feels good to hold, high quality, with a great looking matte black finish.

The top and bottom of the Ninja V each feature a 1/4" thread for mounting options. The top also features an air vent with a sizeable heat sink visible inside. The rear of the device is home to both the SSD mounting slot and the battery cradle. Cooling vents also feature here, which from the look of it act to cool both the battery and any mounted SSDs. 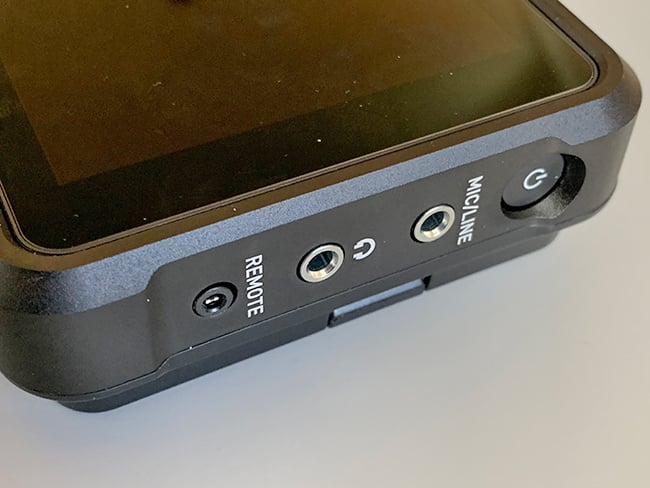 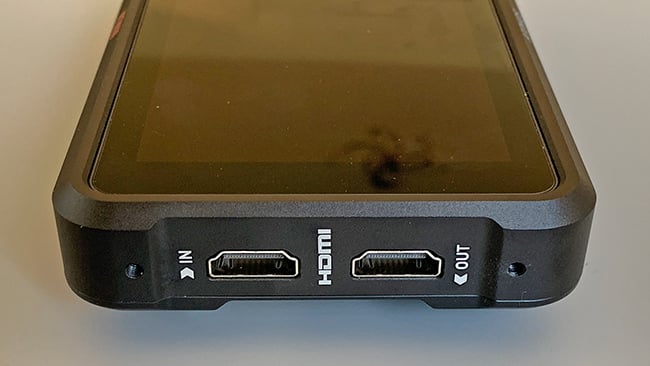 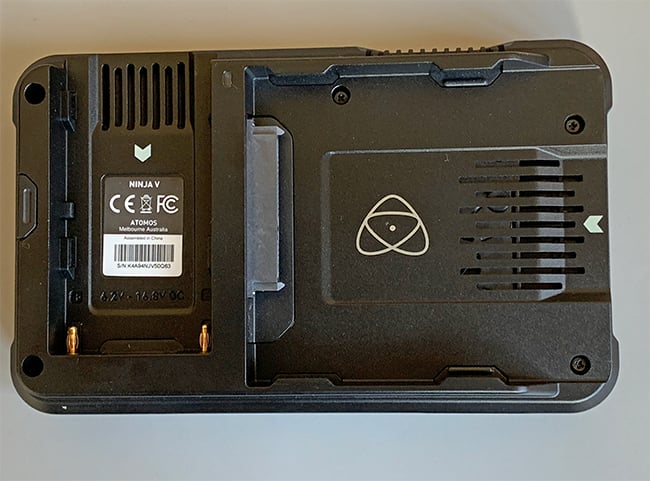 The Ninja V will take any normal Sata III SSD like the Angelbird models that can also be used on larger devices such as the Shogun Inferno. However this does result in a portion of the drive sticking out of the side of the monitor. To solve this Atomos teamed up with Angelbird to make an SSD with a new form factor. Called the AtomX SSDmini, they fit onto the Ninja V without any excess protruding from the side of the device. But as I said, nobody is forcing you to purchase new drives. Your standard sized SSDs will work just fine.

The battery slot, too, is not simply a battery slot. It does in fact do double duty as an expansion port that takes Atomos' range of AtomX accessories, for example, the AtomX Ethernet/NDI and the AtomX Sync devices, which allow the Ninja V to send video over IP, and to wirelessly control a whole group of Ninja recorders for multicam shoots. More devices will be developed, and the port allows the Ninja V to cope with up to 12 channels of audio at 96Khz 24-bit resolution.

The right hand side of the Ninja V is home to a sizeable power button, 3.5mm mic/line input, 3.5mm headphone out, and a remote jack. Meanwhile the left side is home to the device's HDMI input and output.

Due to its smaller size the Ninja V does not feature SDI or XLR in. This isn't surprising due to the market it is generally aimed at, which is generally, but not limited to, mirrorless and DSLR video shooters. 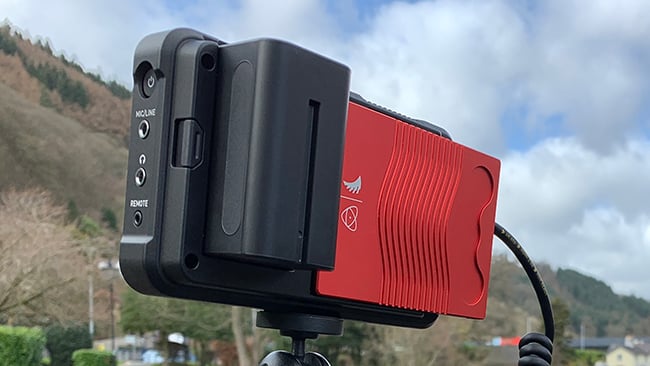 The standard sized SSDs do stick out a little bit, but if that bothers you, you can purchase new SSDmini drives that fit the form factor of the Ninja V perfectly.

The Ninja V starts up super fast. Your camera is likely to take longer than the Ninja to be ready to shoot. As per the Shinobi, the Ninja V uses the latest AtomOS interface, which makes all important settings within clear reach. Most of these, like the toggles for waveforms, vectorscopes, peaking, zebras, false colour etc are all quickly available as a row of clear icons at the bottom of the screen. These are well designed, so that you don't need a manual to decipher what they do.

There's pretty much every tool that you will need to ensure good exposure and focus, and they are all individually configurable. For instance focus peaking can have its colour set, as well as making the picture black and white, or even making the device only show the peaked (in focus) outlines on a black background, thus making your focus setting very stark and easy to see. What's even better is that each of these assistive tools are available during clip playback too. So if you are unsure of whether you nailed a shot, you can examine it at your leisure to ensure you got it right both during playback and whilst the clip is paused.

This is super useful because you can't practically film something while the display is zoomed in for focus checking. So being able to do this afterwards is very handy.

Video input and output is highly configurable. The Ninja V can have its output to another device configured for SDR or HDR, with a choice of PQ or HLG gamma, as well as the colour gamut (a choice between Re.709, Rec.2020, and DCI-P3), and finally you can turn any loaded LUTs on and off too. The Ninja V can also downconvert 4K signals down to HD for instance. Recording on the device itself, as per all other Atomos recorders, is selectable between ProRes and DNxHD.

Usefully there is an option for "Pre Roll". This is a cache record system that will constantly record a buffer of around 4 seconds (for 4K) in the background. When record is hit the device will then write those few seconds to the recording. Something that can come in handy if you are a little slow to hit record when something interesting starts to happen. 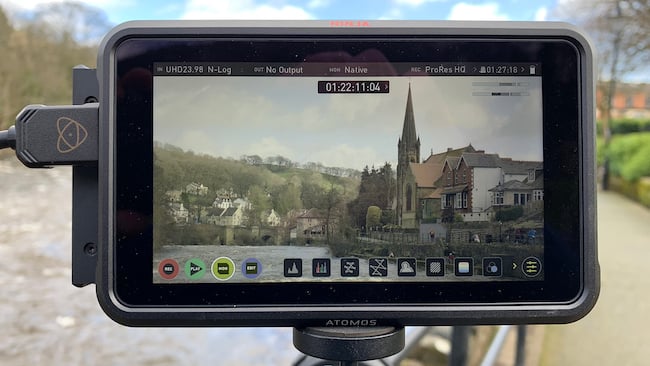 The Ninja V's bright screen ensures that even in bright conditions it is always usable.

To HDR or not HDR and viewing outside

We often get comments on RedShark telling us that monitors such as this are not true HDR monitors. However, this needs to be put in some sort of perspective. The Ninja V is capable of 1000nits of brightness, which Atomos claims allows the monitor to display 10-stops of dynamic range. So far so straightforward.

But the Ninja V is designed as a monitor that allows you to view your shot framing and footage on location, be that in a studio setting or outside. I need not tell you that any monitor that claims to be HDR, even the best ones, will not give you an HDR experience outside in the sunshine. HDR itself needs to be viewed in pretty controlled lighting conditions.

Frankly, the comments relating to monitors such as the Ninja V not being true HDR displays are irrelevant. It's a small on-location device to be used for exposing and framing your shots, as well as recording them. It is not designed as, or sold as, a reference display for grading or critical viewing.

Now that's out of the way, I can report that the Ninja V, just like the Shinobi, is very viewable outdoors, even in bright conditions. Of course a monitor hood never harms, but if you don't have one, you certainly won't find yourself straddled with an expensive mirror.

Resolution of the Ninja V is 1920x1080, which at 5" gives it a PPI of 427. There are options to view 4K footage at 1:1 ratio (plus zoom) for focus checking if required. So while it isn't a "4K monitor" it accepts and records 4K footage with up to 8 embedded audio channels over HDMI depending on your camera.

Battery life, too is very good, with the device drawing a maximum of 19w. Clearly how long your battery lasts will depend on factors like the brightness setting of the monitor, and how much recording you do. You should get at least around 2hrs of recording time using one 5200mAh battery, and my experience using it would seem to correlate with that, more if you are simply monitoring.

The HDMI trigger recording worked perfectly. There is no mistaking when the Ninja V is actively recording because a thick red frame appears around the edges of the screen. This makes things much clearer than relying on a timecode display or a smaller red 'Rec' indicators. I wish all cameras did this!

The Ninja V retails at $695, which I think makes it rather incredible value for the money. It is absolutely packed with features to help you get the shot, and its small size means that it is very portable, as well as being much more manageable when mounted to a camera than its larger stablemates. Such a device is also versatile in that it can move with you from camera to camera. The fact that it will be able to record 10-bit ProRes RAW with selected cameras very soon makes it even more useful by actually extending the capabilities of the camera you own.

I have become a bit of a fan of Atomos products over the years, and the Ninja V just shows that the company's output is just getting better and better.