Review: The LiveU Solo is one of the easiest to use live streaming devices we've seen 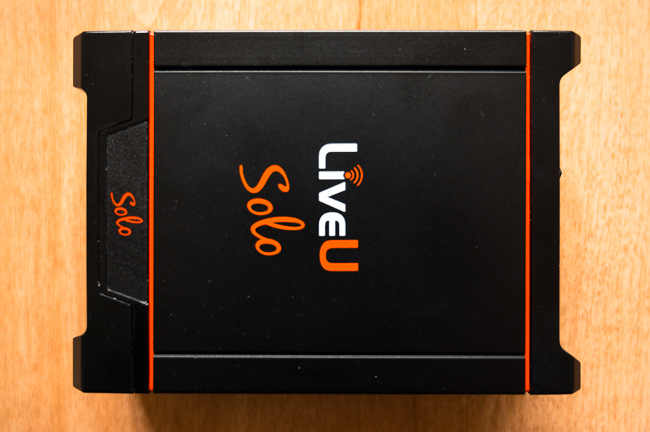 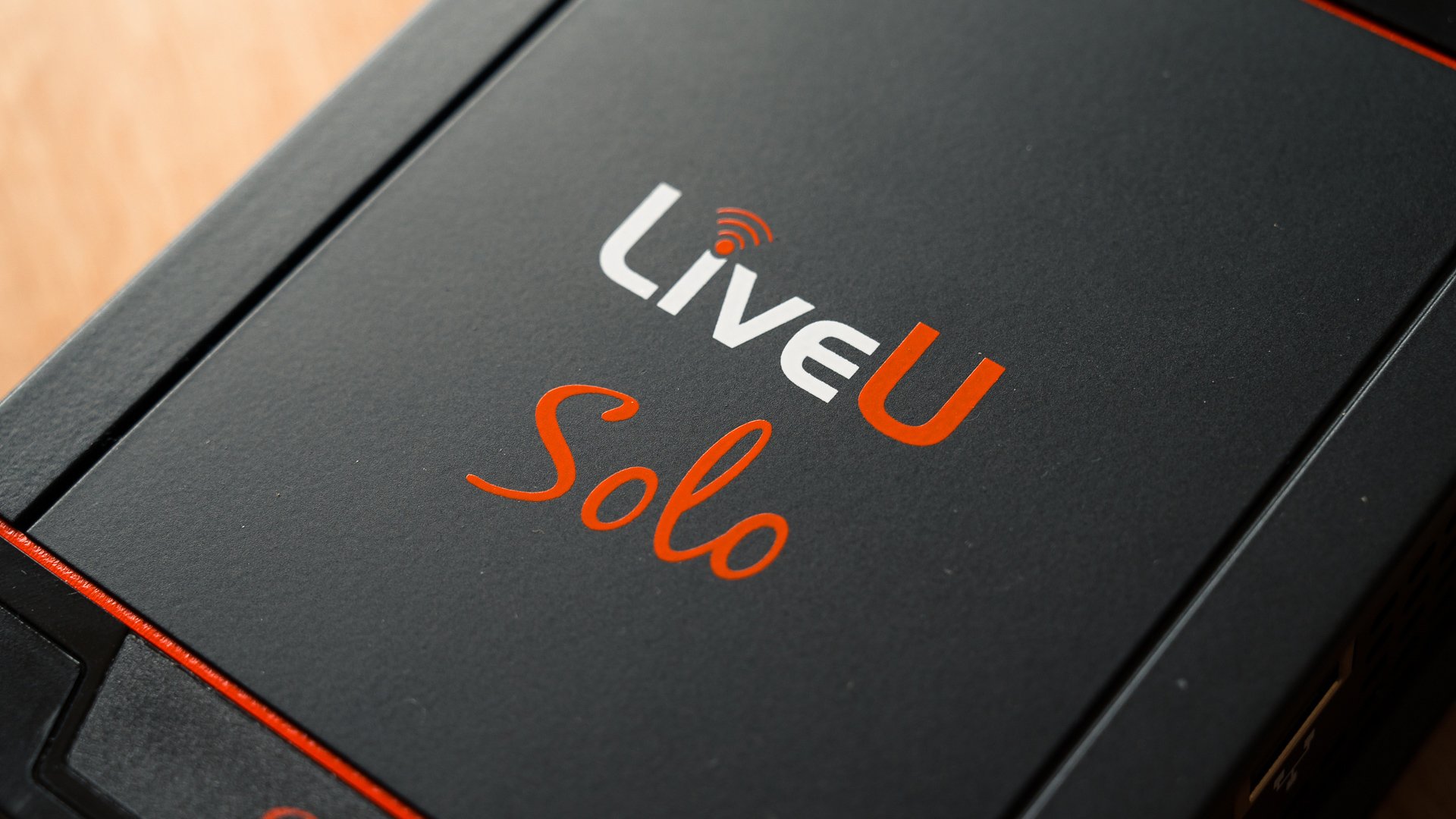 Live streaming is now becoming increasingly popular. The advent of fast internet is now enabling anyone with a stable, and moderately fast connection to create live broadcasts to a worldwide audience. Spanning everything from simply talking to social media followers while on a coffee break, through to breaking news stories that might otherwise be buried or missed by mainstream media, all the way through to full on multi-camera studio setups rivalling anything on television, live streaming has opened up a lot of new avenues for video use on the internet.

Until fairly recently creating a live stream has been a cumbersome affair, but social media sites like Facebook and YouTube have made this a lot easier. Almost point and click. Assuming that is all you want to do is to set your mobile phone running using the front facing camera and be done with it. But if you want to be a bit more professional, and wish to use a much higher quality camera, yet still be able to stream from pretty much anywhere in the world, you are going to need a widget that will take the output from that camera and then stream the footage to wherever you want it to go. And that's where the LiveU Solo unit comes in. 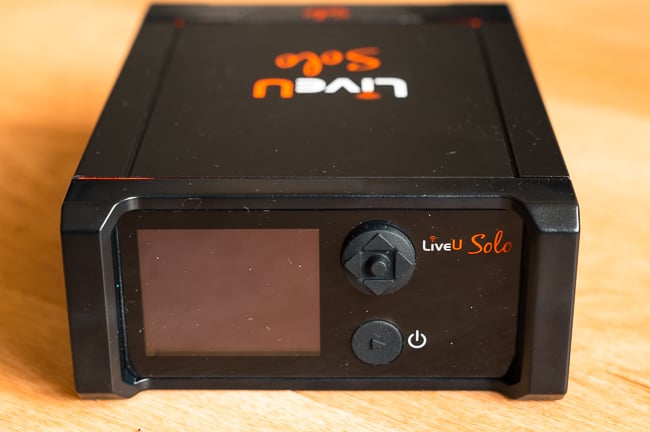 The setup and monitoring display. A little difficult to see outdoors, but perfectly acceptable for its purpose.

What is the LiveU Solo?

Put simply the LiveU Solo allows you to take the HDMI output of any camera (there is an alternative version with an additional SDI input) and then stream it easily to any destination you choose via the LiveU streaming interface. As long as you can get an internet connection, be it wirelessly to a router, via a network cable, or even connecting the device to your mobile phone's tethering capabilities, you can stream to your followers using the Solo.

This means that there are a vast number of possibilities open to you to be able to use any camera or switching desk with an HDMI output and create programming from anywhere in the world. Given that even in developing countries now you can often get a decent phone signal, this means the opportunies are far and wide, especially given the Solo's unique abilities to bond multiple connections. So you could for instance, in LRT mode, use two USB wireless modems in an area with not so good connection speeds and the device will bond the connection for higher quality streaming. The Solo will bond any valid connections given to it. The LiveU Solo has an internal battery, so it doesn't even require a mains connection for it to work, other than to charge it up or run it for extended periods of time over 2hrs. 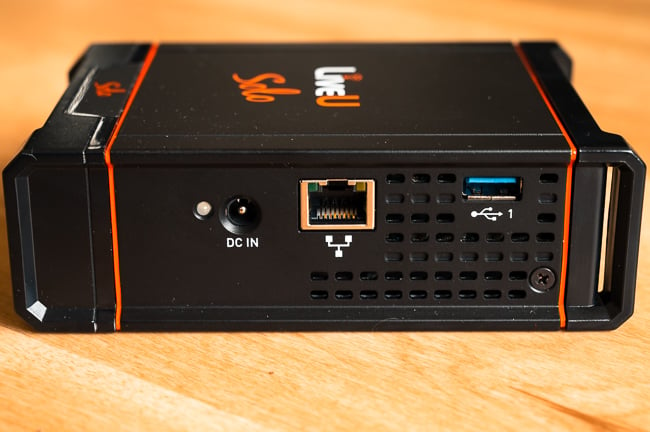 The LiveU Solo is a nice and compact unit. Measuring in at 95mm x 132mm x 43mm the Solo has a similar footprint to the average V-lock brick battery, but a lot lighter at 518g. The metal chassis is very nicely constructed with tasteful logos on the outside. Its build quality indicates that it will take the day to day rigours of transportation and field use with ease. The device is even supplied with a field cover for added protection, which features a belt clip to save hand carrying it in field use, or it could be mounted 'naked' to a hotshoe bracket on the top of a camera.

The port arrangement is very straightforward. Two USB sockets for connecting wireless modems (LiveU has a list of tested and approved modems here), a full size HDMI socket, 3.5mm headphone out, and a DC in for powering off the mains and for charging, with an associated power light indicator. There are also vents for the built in fan cooling.

On the front of the device is an LCD display to show both the image from the camera and also the built in setup menus.

The actual setup of the device can be done either through these menus, or, once connected to the internet, through the Solo portal on the web. An iOS app is also coming soon as another option for setting up and monitoring streams. 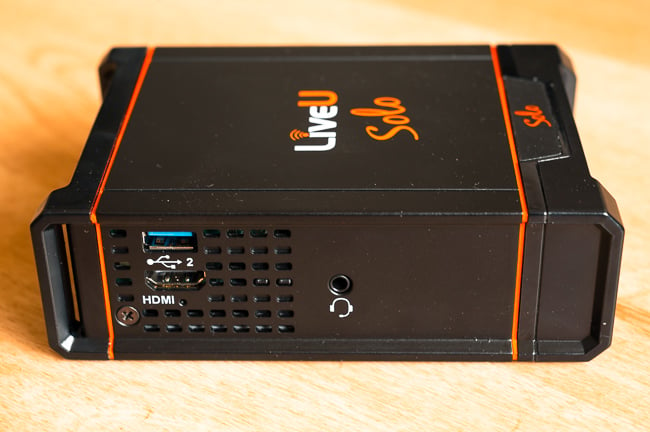 Setting up the Solo is incredibly straightforward. It takes a minute or so to boot up, but once it had done this it picked up on my local network quickly before I entered the network password. Once this is done, or you have connected to whichever internet connection you have to hand, you can then use the Solo portal to set up a live stream.

There are around 31 preset outlets for you to choose from, such a YouTube, Vimeo, Facebook, Daily Motion, Akamai etc. But there is also the option to set up your own custom RTMP stream. If you are using one of the preset streaming methods you will need to connect the Solo Portal to your relevant streaming/social media account. To say that the Solo makes this a breeze is an understatement.

When we used to do RedShark Live, the streaming process there we considered to be fairly straightforward, but we still had to manually input the streaming addresses etc in order to set it up. The Solo takes all that work out. Once you are connected to your relevant account through the portal you are pretty much ready to rock.

The interface on the Solo Portal is very clear and minimalist with no clutter as you can see below in the stream setup dialogue. 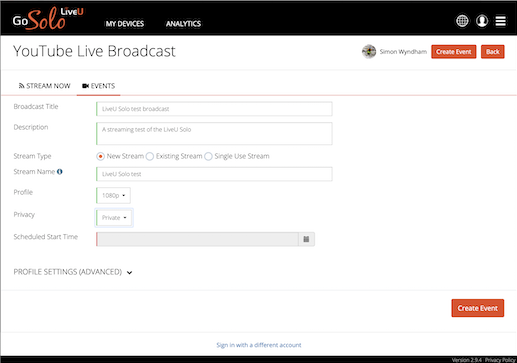 Setting up a live stream

One of the great things about setting up a stream here is that even with Facebook you can set the post to be private within the Solo Portal interface so that you can test a stream easily without prying eyes. This was a huge limitation we found with RedShark Live in that it was difficult with our set-up back then to actually test the Facebook stream in private. There's no such issue here.

You can create instant streams, or you can create scheduled ones. Currently there is no way to perform multiple streams to different social mdeia accounts. So, for instance, you cannot currently stream to Facebook and Twitter. This could change in future products however. (You would normally require two encoders to go out to two separate streaming platforms). 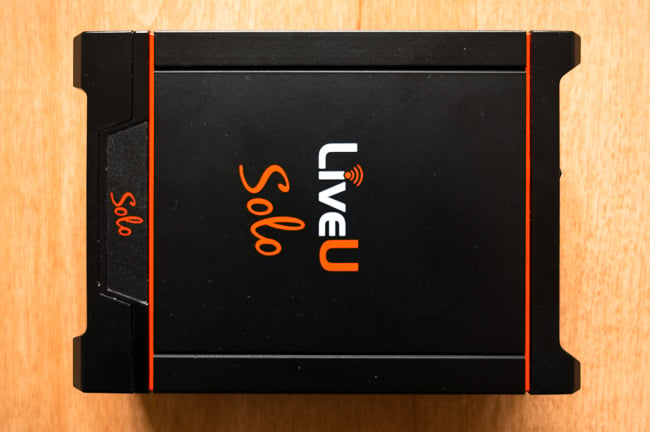 As a sign of how streamlined a process LiveU wants to make the streaming process it also provides for a subscription based graphics option for $75 a year. What this does is gives you an online graphics mixing desk, allowing you to add on the fly lower thirds and logos to your live streams without the need for a physical mixing desk. This takes image formats up to and including SVG files, so you can overlay some pretty smooth graphics. Once these are loaded in, the 'vision mixer' simply has to press play on the relevant graphic or lower third in the list, and it will auto fade up. Press stop and it auto fades out again. Or you can preset a timer in minutes and seconds so that once play is pressed it will auto fade out after the alloted timer has run out. beautifully simple, and allows an added professional flair to streams without the requirement for much technical know-how. 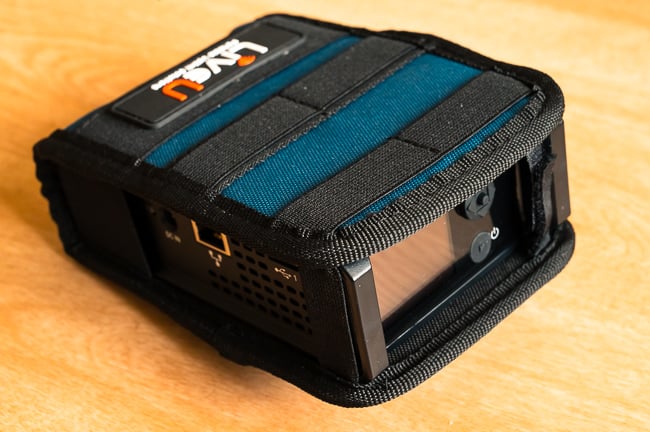 The LiveU Solo inside the supplied protective field carry pouch

Once your stream is set up and you are ready to go, the LiveU system needs to preload any graphics you have set up, which takes a few seconds, and then you're off. The quality I was seeing from some private test streams was incredibly good. I am on a pretty good internet connection with 100Mbps downstream, but only around 5Mbps up. But even still these were 1080p tests. It would indicate that the Solo is doing a pretty stellar job of efficient H.264 encoding.

The front LCD monitor screen on the SOLO is a little dim to view in outside light and is low resolution, but its main function is to give confirmation of picture input streaming, and to use the setup menus, so this is easily forgiven. It isn't intended as your main monitor. The menus that are available through the on-device controls are clearly labelled and easy to navigate, just like the online portal. There's no uneccesary clutter going on.

The fan is a little noisy, which could affect some studio setups. But given the connectivity options available, in such scenarios it is an easy matter to locate the Solo well away from any mic pickup. There's no requirement that the device needs to be physically near to where the action is taking place.

The live streaming device market is hotting up. But one of the distinguishing factors to success will be how easy and straightforward to use such devices are, as well as how versatile they are. The LiveU Solo ticks both those boxes and is currently the most straightforward streaming device I have used, whilst also having a lot of underlying power available, such as the web based graphics mixing, and the 'do it in your sleep' connection bonding. The Solo allows you to get on with the business of setting up your creative content rather than having to spend all your time stressing about how you are going to set up the stream.

At $995 it's well priced for a very high quality, and easy to use device that will be well worth it - given all the stress it could save you!