Where can the action camera go from here? 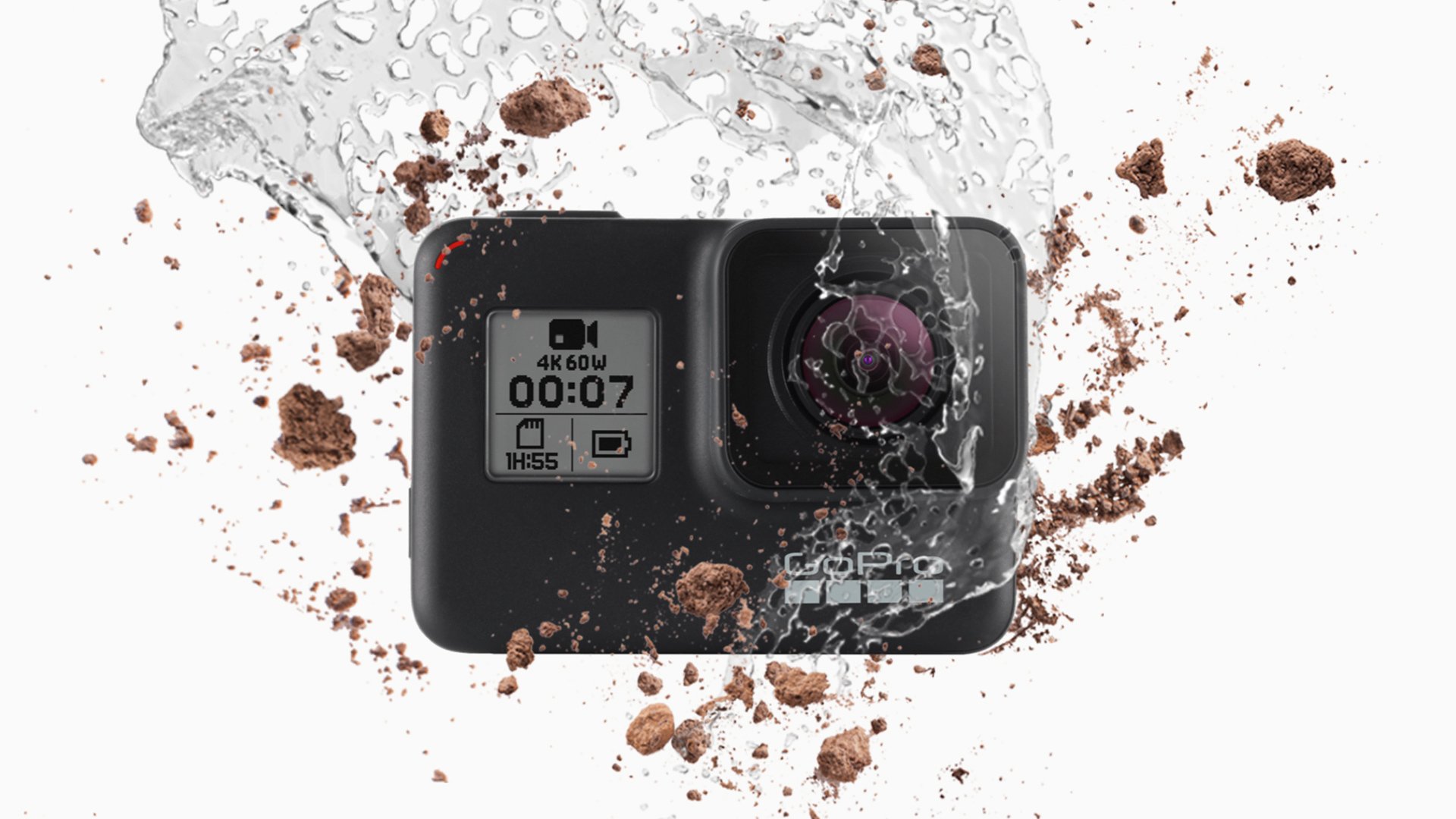 Action cameras have opened up a whole new arena of video shooting in the most extreme environments and sports. But where can they go from here?

Pretty much every year GoPro announce a new version of its Hero camera, and also pretty much every year there are those who say that the new model doesn’t offer enough wow factor over the old one. To some degree they have a point. The overall picture quality of the Hero 7 for instance doesn’t offer anything much over the previous version other than a few new frame rates and resolutions. More RAM did allow for the new model to include a really rather impressive new stabilisation system. But other than that it isn’t a slam dunk as to whether you should upgrade or not.

There are of course a lot of alternatives out there, from Sony at the high end all the way down to unknown brands produced for outdoor shops such as Go Outdoors. Some of these alternatives, it could be argued, are better than the market leader. But the stark reality is that none of them really offer anything hugely different from one another. Show me some well shot footage taken with the Sony without telling me, and I wouldn’t be able to tell you which brand or type of action camera it was shot with. And that’s actually a good thing in some ways. 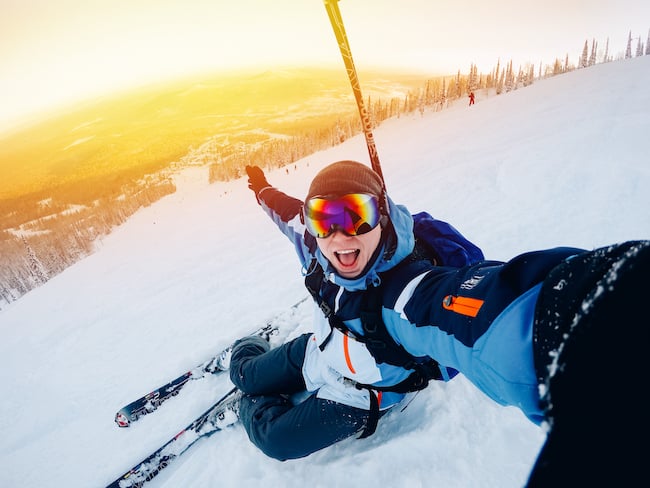 Action cameras might have heralded an overuse of selfies, but there is no doubting their usefulness in the right hands. Image: Shutterstock - Parilov

But this leaves us with a question. What can be done with action cameras now to take them to the next level? GoPro has tried to branch out with its Fusion 360 camera. And while there are some interesting videos shot with it, it has never really caught on in the way that the original cameras did. In some ways it’s a step back, with a much larger body and the need to either publish the video as a 360 or to put some effort in and use over capture mode to do your framing later.

As someone who likes gadgets, for me I wouldn’t mind that, as long as the resultant over capture shots could be true 4K after reframing and distortion correction. But at the moment this isn’t possible. In order to achieve that the sensor would need a pixel density that simply isn’t available at such sizes, yet. But it is a direction of travel that we can’t discount arriving at a destination some time in the future.

Which leaves us with traditional POV style cameras. What could be done with them to make them a bit more of an attractive upgrade over what has gone before? I have a few suggestions. Not all of these will be possible on the same camera, but are things that I believe would change things for the better. 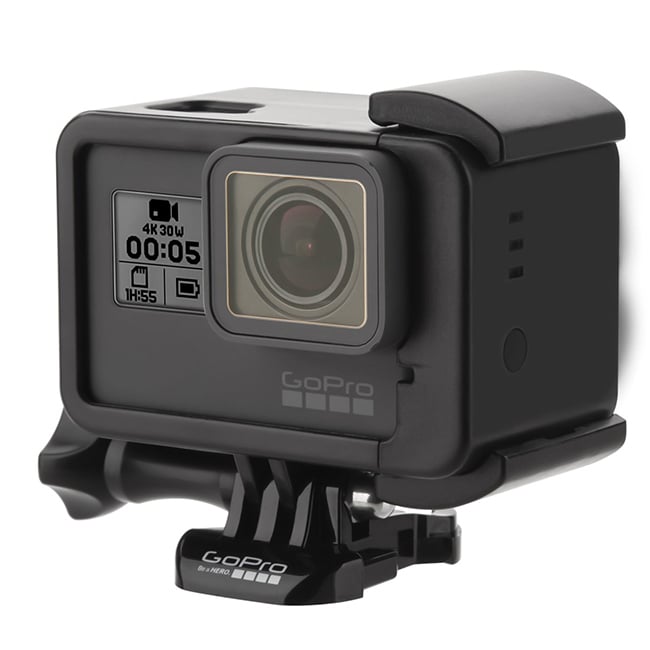 The Sinomax batterypack frame for GoPro.

Battery life is a huge issue with action cameras, with many of the top end models struggling to get around an hour of running time at the highest framerates and resolutions. It is possible to carry around multiple batteries and change them, but doing this in a water sports environment or in the rain is fraught with risk to the internals of the camera. We need either better power management, or a decent waterproof solution to adding external power. GoPro used to offer a battery pack, which attached to the back of its cameras, but that is no longer an option now that they come with a built in LCD display. We need something like a frame mount with a battery in its base. There are third party solutions, but feedback suggests that they are not always reliable, so we need an official solution.

HEVC can cope with 10-bit, so it should be offered as an option as standard on action cameras given how they are used now, often integrating with larger cameras and the footage needing to be put on the same timeline. I know this isn’t the primary market for such cameras, but even amateurs are now wanting to grade their footage and do a lot more with it.

Milder compression would go some way to help things as well. The compression ratios used now are there to save users money on storage capacity. But I propose we are given the option of setting things to a much higher bitrate.

Dual cameras are now ubiquitous on most top end smart phones. If a smart phone can manage it, an action camera sure as hell can. Two, maybe even three cameras would produce a huge amount of flexibility, particularly if the angles from them could be recorded simultaneously. Either way this would give a really good option to avoid the fish eye look.

I’ve seen a few lenses, such as the one I tested with the IO Industries 4G SDI camera last year, that have incredibly wide angles of view, but no fish eye distortion, and yet don't cost the earth. I’d be quite happy to pay more money if the wide angle lens on an action camera had virtually zero fish eye distortion on it. I know this can be corrected electronically, but this comes at a cost to picture quality and resolution. I’m sure this is possible. GoPro lenses are user changeable. You can buy replacement kits for them. So why not offer a zero fish eye lens as an option for those who want it, even if the angle of view is slightly reduced?

Yes, you can use a USB mic with some action cameras. What you can’t do however is then put that camera into water. Surely there is some way we could have a water sealed mic and mic connection? Sound is one of the weakest areas of all action cameras, and it needs some real thought given to it to give us a really good solution to the problem. It is hugely needed.

Some of these things would create a pricey camera at a time when people already complain about the price of GoPro’s as they are. But with that said, I am sure that with the right features such a price increase would be deemed worth it. Whether or not that makes it commercially viable is another question, but the fact remains that there are some quite glaring issues with such cameras that desperately need resolving.