The Silencer: How to make a micro budget action film with minimal resources 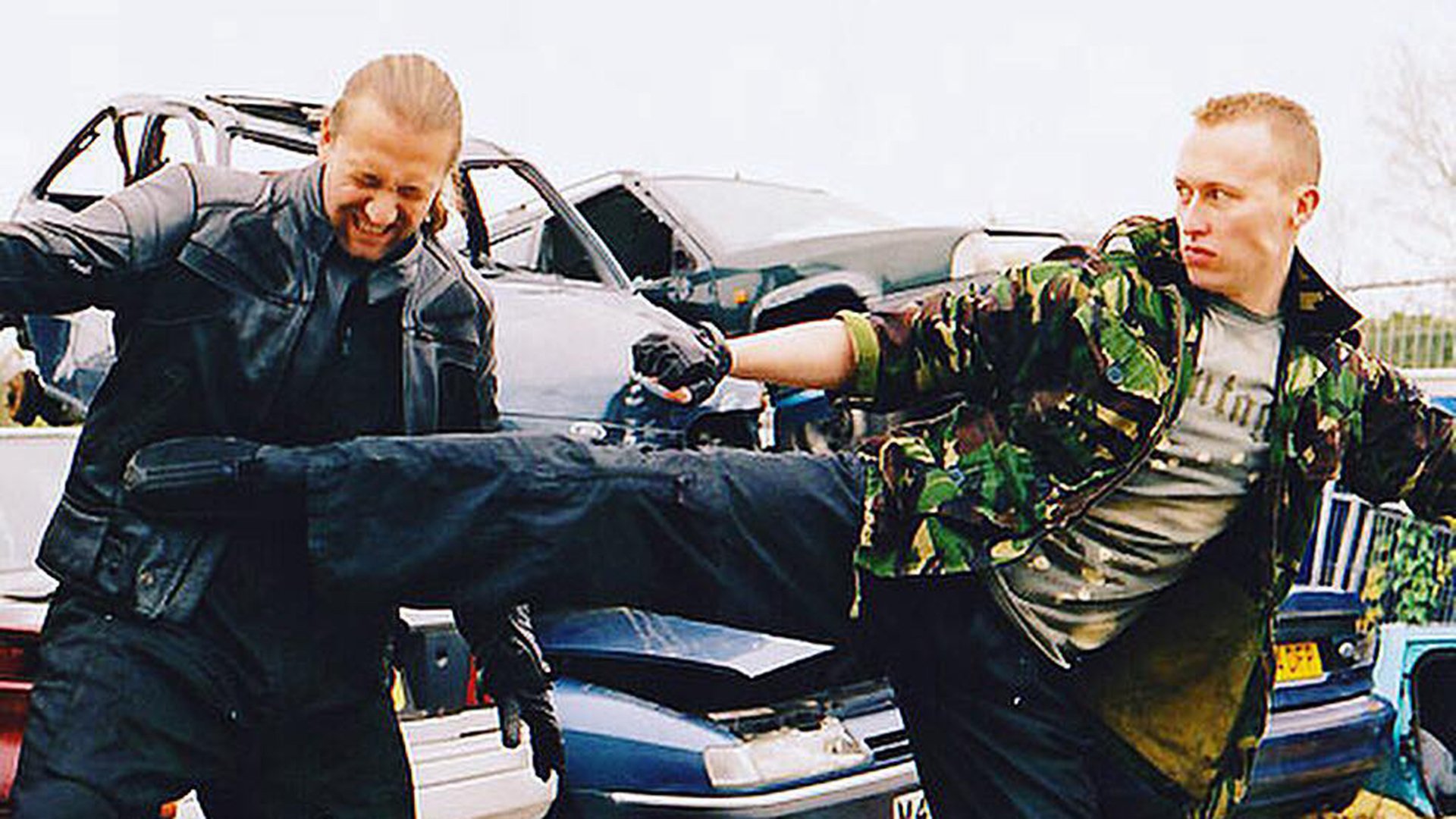 The Silencer was one of the first purely British martial arts action thrillers, made on a micro-budget

The Silencer is one of the earliest examples of a British martial arts action thriller, and it was shot mostly on a humble Canon XM1. We twisted RedShark Deputy Editor Simon Wyndham's arm to firstly admit that he had made it, and secondly to tell us all about it, and we discover that not all your closet skeletons should remain hidden.

Once upon a time I used to be involved in low budget indie film productions. Not the sort of film production that had swarms of crew around a really nicely rigged up camera with digital clapperboards and high resolution monitors all over the place. But the sorts of production that guys like RedShark's resident DP Neil Oseman cut their teeth on like "Soul Searcher", which I was also involved in.

In between the day-to-day video jobs it made for a great distraction, and in fact helped me a lot in my development as a camera monkey. You learn a lot when you've not much to work with.

Those were the days when standard definition ruled, and vast swathes of people still watched television on small 4:3 TVs, although in the UK 16:9 screens were common. Most of them still the CRT variety. DVDs were in full swing however, but the choice of camera for the budding Steven Spielberg was small. One of the weapons of choice for corporate work back then was the XL1S and its smaller sibling, the XM1. By 2004 even these cameras were long in the tooth, but they kept plodding along.

By this point I had my beloved 2/3” bad boy XDCAM camera, which was revolutionary at the time and produced far and away a much better picture than the Canon. It was a 'proper' camera with a 'real' lens, and it even had 'real' 25p. But the movie that I had started work on had begun life on an XM1 with an anamorphic lens attachment, because both Steve Lawson and I had one of these cameras each. It was an absolute pig of a rig that I despise to this day, with its limited zoom through and inability to hold focus. The digital film in question was called "The Silencer", co-directed by both myself and Steve, and starring a chap by the name of Glenn Salvage and actress Maye Choo, both of whom have gone on to much bigger and better things.

We all have skeletons in the closet, and so here is the story of one of mine. 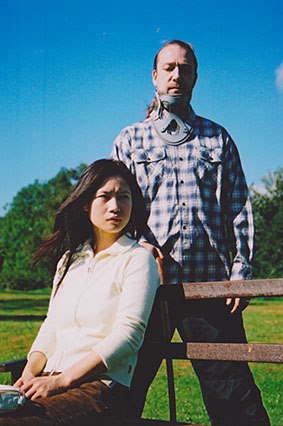 Maye Choo, and Glenn Salvage in 'that' shirt

Both Steve Lawson and I have been huge Hong Kong film fans since the late 80’s. Jackie Chan, Sammo Hung, and Yuen Biao ruled, and while the production values often left a lot to be desired, the fight and action choreography, as well as incredible physical stunts, were unmatched anywhere else in the world. It is safe to say that we really didn’t like watching US made action films as a result, with their slow and plodding way of shooting fight action with master shots and close ups versus the much more flowing and creative segmentation method that the Hong Kong guys used.

There was certainly nothing at all like this coming out of the UK. Unless you were making a feel good comedy, a weird art film for the Tate, or a period drama, film funding was a none starter. We had already made “Insiders” in 2001/2 on a budget of 20 pence, and so we decided that after the hell of making that we should try something even more ambitious. Our budget henceforth shot up to 50 pence. Okay, it was much more than that, but it didn't feel like it.

This was a time when guys like Scott Adkins (now a huge B-movie action star) were only just making their first forays into ‘real’ films after paying their dues on the sort of rubbi… I mean low budget digital movies such as Steve and I, and our peers, were making.

Anyhow, we decided that what we needed to do was to make a very 80’s inspired grunge martial arts revenge thriller based on the image of a bloke in biker gear and, occasionally, a really terrible checked shirt. You can see why the Hollywood execs didn’t exactly come banging down our doors… And that checked shirt still gives Glenn nightmares to this day. 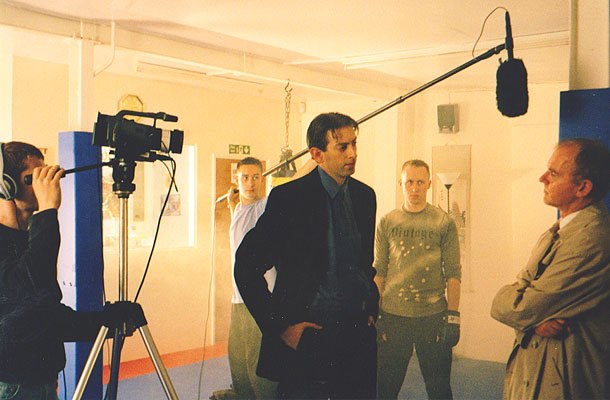 When the actors are your crew... And the crew are your actors.

Getting serious for a moment

I acted as co-director, DP, fight choreographer, co-editor and sound designer. While I jest about the film now, at the time we worked damned hard at it with incredibly limited resources. We took that XM1 with the really limited anamorphic lens and pretty much infinite DOF and decided that the ‘cinematic’ aspect would be drawn from the camera movement. Subtle glides, jibs, and sometimes almost imperceptible push ins. I also tried to allow the action to happen within the frame, keeping things quite wide for much of the time. There was nothing we could really do about the horrendous softness or limited DR, but we could only work with what we had. So we were forced to discover ways to make such a camera work.

We filmed in all sorts of places, from Steve’s house, which we converted into a grungy flat/apartment (much to the joy of his other half), deserted alleyways, and a scrapyard we used for the climactic end battle, allowing us carte blanche to smash up anything we wanted! There was just the small matter of dealing with the location owner, Scrapyard Rick as we called him. A self proclaimed advisor to the SAS despite his rather, ahem, sizeable frame and alarming penchant for pulling out huge quantities of ear wax using his pencil. Rick was also possibly not best pleased when our lead actor didn’t get the memo not to flush the toilet on the site due to a blocked septic tank, causing a bit of a spillage. But I digress.

That said, we made good use of the location, using our stunt team to perform all sorts of flips and falls as the battle againstcountless balaclava wearing henchmen was brought to fruition. The location was incredibly dirty and cold, but we were left alone to get on with things. It was a micro-budget filmmakers dream.

The Silencer, for all its faults, is a good lesson in how to tailor a movie concept and script to the budget you have (or rather don't have). Our lead actor, Glenn, is a really good actor, but we rendered his character mute for most of the film due to his undoing at the beginning, which sets the story going. This meant that much of the time we didn’t have to worry too much about dialogue… Apart from the other characters, who seem to talk endlessly. Not sure Steve thought that one through enough! 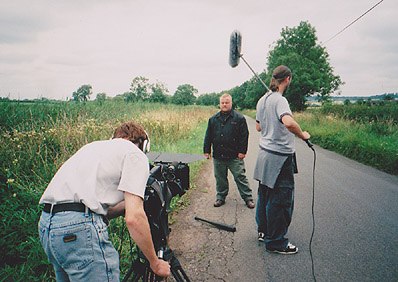 When I was allowed to use the proper camera

This was before I had a Mac, but I did have Sony Vegas! Post production on The Silencer seemed to drag on forever. I’d like to say it was a collaborative edit, but that’s probably a stretch. But we muddled through somehow transferring my edits to Steve’s Edius system, where recompression hell would take place as they were matched up with Steve's.

Vegas came into its own though, for a number of reasons. Sound editing and sound design was a doddle, and I had great fun doing the fight sounds and foley. I even managed to remove Steve from the background of one particularly emotional scene. Having the director prominently sat on the side of the bath in the background somehow ruined the atmosphere. It took me a while to do it, but I managed to remove him using purely the tools inside Vegas. Just don't ask how on earth we missed this while shooting!

The biggest limitation placed on the final edit was purely down to the camera. The XM1 was an interlaced camera. It did have a 25p mode on it, but the advice at the time was that it was better to shoot interlaced and then use a deinterlacer such as Magic Bullet. And this is what we did. But despite all the claims, the finished image is probably more like a smidgen over 220 lines worth of information, and plagued with aliasing. The XDCAM shots had to be degraded to match, which was a shame.

The Silencer, when watched now, is laughable in many ways, but it has to be remembered that at the time virtually nobody else had made a cohesive Brit action film with the sort of fight action we were doing. We even had our own theme tune and music video! It was a great experience looking back, and frankly I would love to do another action film, knowing now what I do.

Lead actor Glenn Salvage has gone on to feature in films such as Aux and Adventure Boyz, while some of the stunt crew members went on to become fully bonafide stunt performers both in Hong Kong and over here in the UK. Yes, it might look like it was shot through a net curtain, and yes, some of the henchmen look like they haven’t started shaving yet. But sometimes you’ve gotta make do with the cards you are dealt. The skeletons in your closet are the ones you cut your teeth on and learnt the most lessons doing (such as never pick up your publicity stills from the local photo development store otherwise you end up face to face with armed police officers. True story!)

The Silencer can be watched on Amazon Prime if you really want to. I'll let you find it! I would recommend lots of alcohol first though. Let us know about your skeletons in the comments below!

Lastly here's the BTS, with me looking 12 years old.